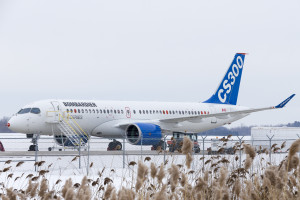 The CS300, challenger to the A319neo and 737-7, is to take to the skies as Bombardier’s flight testing program enters the final stretch. BBD still claims it will deliver the first CS100 by the end of this year, though most analysts (and we) believe it will slip into 1Q next year.

The CS300, 135 seats in two classes and 149 in standard one class, matches the 31-inch pitch configurations of the “baby” Airbus and Boeing products.

Bombardier claims large operating economic advantages over these competitors. Our analysis shows economics probably a bit closer than Bombardier would like. 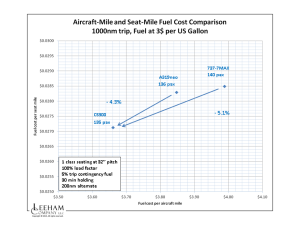 The Bombardier CS300 has an economic advantage over the Airbus A319neo and Boeing 737-7, according to our analysis using our proprietary modeling. Source: Leeham Co. Click on image to enlarge into a crisp view.

On a per-seat basis, using 32 inch pitch, the CS300 advantage narrows somewhat but still retains a gain over the new Airbus and Boeing offerings.

The CSeries is a bet-the-company effort by Bombardier to step up into the major airline sector. Heretofore, BBD played only in the regional airliner market with its turbo-prop and Regional Jet offerings. Bombardier has had many stumbles that have slowed sales. But most importantly, the program is now two years late and $2bn over budget. Its early program lead over the Airbus A320neo has evaporated and it’s now likely the CS100 will enter service after the neo. The lead of the CSeries over the A319neo, 737-7 and the Embraer E-Jet E2 has also narrowed considerably.

Bombardier hasn’t revealed the economic testing results from Flight Test Vehicle 4, the so-called performance airplane, but our Market Intelligence tells us that it’s meeting guarantees and performing better than those.

← Order cycle may have peaked for mainline single-aisles, but smaller jet cycle booming
Redefining the 757 replacement: Requirement for the 225/5000 Sector →