This will happen via its new sibling, Virgin America, which has 10 A321neos on order. VA is an exclusive A320 operator. Alaska flies only Boeing

737s. The acquisition of VA by Alaska immediately raised questions whether Alaska will retain the Airbus fleet and orders or phase them out in favor of the 737.

Of more interest to partisans than to me, the question over the future of the Virgin America brand also became a top question. 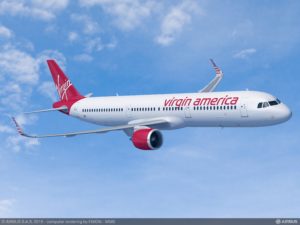 During the year-end earnings call last week, VP-CFO Brandon Pedersen volunteered, “At Virgin America, we’ll take some number of the A321neos Virgin was planning on but we’re working with the lessor on an arrangement where we don’t take all 10 that are scheduled to be delivered over the next two years. Virgin America will be the worldwide launch customer for those aircraft, which will be configured with 185 seats, and we’re very anxious to see how they perform.”

“The Airbus is a great airplane,” said Ben Minicucci, president and COO. “As you know, we love Boeings, we’re all Boeing and we’re proud of that, and we’re learning a lot about the Airbus. What I will tell you is where you put the Airbus. It’s one of the things we’ve done well. We’ve put the right airplane in the right market. The…320… is limited as [a] Trans-Con airplane. We think it is a better North to South airplane. So at least in the next five years, I think you’ll see [marketing] work with the ops team really to get these airplanes in the right markets to really maximize their potential. So, where the 321s go, whether they go Hawaii or Trans-Con, I think we’ll make the right decision for to maximize their potential.”

During the Q&A, Dominic Gates of The Seattle Times asked a follow-up about the fleet plan.

“We have been proudly all Boeing for I don’t know how many years, 10, 15 years,” said CEO Brad Tilden. “We have ‘Proudly All Boeing’ on the front of every one of our airplanes. We’re really proud of that. Flying Boeing airplanes has been fantastic for this company. That flying a single aircraft type has been fantastic for this company. So, that’s fact one.

Tilden said that the issue is pressing because the first A321neos are delivered this year. (Four this year, the first in May, and six next year, according to the Ascend data base.)

The lessor is GECAS.

Alaska has 17 737-9s on order, just a fraction compared with the large fleet of 737-900s/ERs that one day must be replaced. The -900ERs are relative new, but Alaska was the launch customer for the original, standard 737-900. The standard -900 is, by flexible standards, a sub-par airplane. Field performance is poor and it can’t do US trans-con. These would be the first to go in a re-fleeting.

But the MAX 9 pales to the A321neo, which carries more passengers, has more range and has better field performance.

The prospective MAX 10 carriers slightly fewer passengers compared with the A321neo and has substantially less range—but it can do US trans-con.

If all Alaska wants is more seats, the MAX 10 would serve it well. But if range is needed, Alaska must choose the A321neo.

The A321’s wider cabin also provides more flexibility for premium services, such as JetBlue’s Mint, should Alaska choose this path.

Given Alaska’s continued expansion into longer haul markets and increasing competition in the premium cabin arena, the A321neo is the more flexible airplane.

It all comes down to where the airline will go for new markets and passenger experience.

Although of less interest to me, especially since I’ve never flown VA, is whether the VA brand is retained. I don’t think it will be.

In the US, multiple-branded mainline operations within one company have never succeeded. USAir/Metro, Continental/Continental Lite, Delta/Song and United/Ted were all flops. The secondary brands all disappeared into the primary ones.

Even at Alaska, in the end, multiple brands were eventually merged into the Alaska name: Jet America and even Horizon Air became Alaska eventually. So it will with Virgin America, I believe.