It’s clear that the investigation is not over and, for the ITC, there remain unanswered questions and further analysis to be pursued.

But the crux of the ITC’s decision is that even though Boeing didn’t compete for the Delta order with its 737-700 or 737-7 MAX, the prospect that there will be competitions emerging within the next five years and the facts of the Delta deal are sufficient to conclude BBD’s price to Delta constitutes a threat to Boeing’s ability to sell the MAX in the US.

The competition at United Airlines that preceded the Delta deal also factored in.

Bombardier and Boeing competed at UAL. Boeing won, but complained it had to drop its price so low as to set a new low bar for pricing that would trickle up to the entire 737NG and MAX lines.

Boeing alleged BBD sold the CS100 to Delta for $23m, or $19.6m after adjustments. Delta and BBD denied the $19.6m and said the price was “millions” higher. Testimony didn’t specifically address the $23m claim.

The sales contract was provided to the ITC under confidentiality. All the pricing numbers were redacted from the decision issued last week.

Every other number of interest that would have enabled an outsider to judge for himself if there was a case was also redacted.

At times, the ITC went too far in redacting numbers, excluding information in the decision that survived redactions in the transcript of the hearing.

At other times, the logic behind the redactions is baffling, such as deleting the number of hot-and/or-high airports that need the 737-700, MAX 7, A319 or CSeries to be serviced properly.

Delta testified that it has 10 737-700s specifically to serve hot/high airports in the US and in near-Latin America. (Though not part of this case, American Airlines acquired the A319 for the same reason.)

The CS100 is particularly well-suited for challenging airports. The larger CS300 isn’t as flexible but it carries more passengers.

Delta testified that the 737-700 and MAX 7 were not economically competitive with the CSeries. Furthermore, Boeing couldn’t offer the airplanes within the timeline Delta wanted. Boeing’s production lines are full to 2022 and Delta wants the airplanes beginning next year.

The ITC rejected the latter argument, instead accepting Boeing’s testimony that if it had the orders, it would boost production (although it admitted it needed two years notice to do so).

Delta testified to its aircraft fleet selection process. The ITC subsequently surveyed US airlines, which it did not identify, about what factors they considered and ranked by priority. The results were one of the few sets of detail that were not redacted.

Availability and backlog were among the top factors. 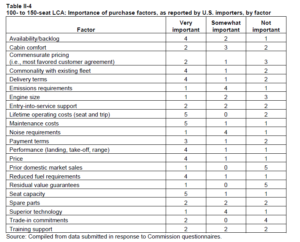 Cabin comfort (passenger experience) ranked low, something that would hardly be surprising to today’s travelers.

Prior domestic sales were not important, contrary to Boeing’s assertion that Delta’s “commercial momentum” would spur CSeries sales in the US in competition with Boeing’s MAX 7.

The ITC accepted Boeing’s argument that allowing Bombardier to succeed with its alleged dumping in the Delta case would threaten future campaigns, within the next five years, for the MAX 7 in the US.

The ITC did not consider the realities on the ground (at least in the public documents) that within the US, the only realistic prospect of a campaign involving the 737-7 is Southwest Airlines. Southwest has hundreds of 737-700s that will have to be replaced. The likelihood of Southwest leaving Boeing for Bombardier is remote and in any event, it’s been up-gauging.

The other major 737-700 operators are United, which up-gauged its 2016 -700 order to -800s and MAX 8 (and then further up-gauged some of these to MAX 10s); and Alaska Airlines, which is also up-gauging. Delta, with only 10 737-700s, operates a number of A319s from its merger with Northwest Airlines. While theoretically, replacing the A319s would be a Boeing-Airbus-Bombardier competition, Delta’s relations with Boeing (already not especially good) likely took a nosedive with this complaint.

American chose the A319. JetBlue, Spirit and Frontier airlines are Airbus operators.