July 21, 2017, ©. Leeham Co: In this Corner, we will start looking at the mass of the different components in a hybrid electric propulsion system compared with a classical turbofan propulsion.

Weight of a hybrid chain

We will develop the different masses for the components in a hybrid propulsion chain and compare these to the mass of a normal turbofan propulsion system. The components are those in Figure 2. 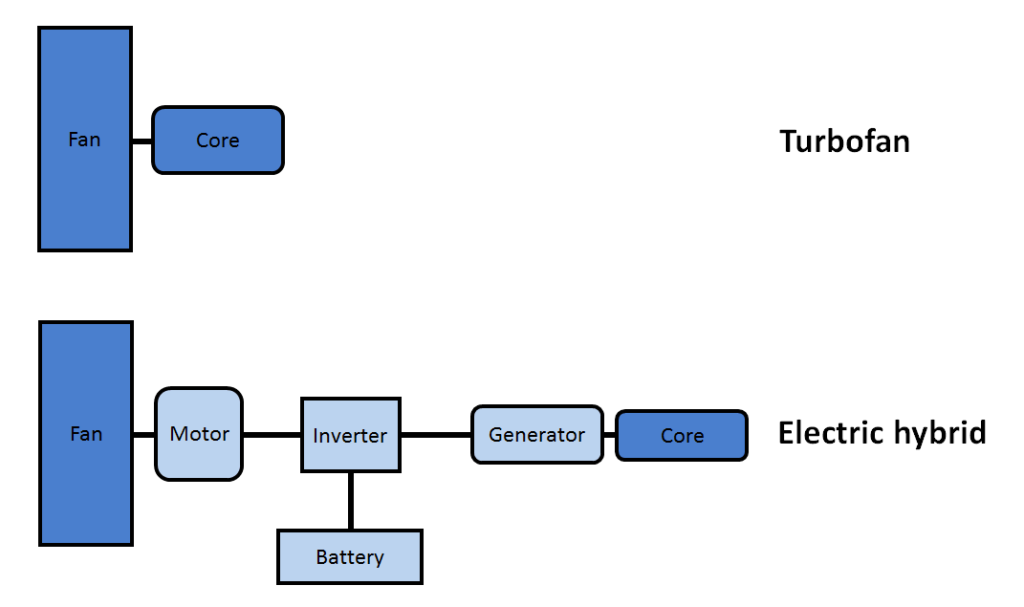 To propel our airliner at the dimensioning take-off case, where one propulsion unit is inoperative, we need the same V2 safety speed power from three propulsion units as one of the turbofans, i.e. 7000kW. It means we need 2,333kW per motor driving the fans. Our take-off power is then 4*2333kW=9,332kW instead of 14,000kW for the turbofan case.

Electric superconducting motors for driving fans will have a special build. Fan modules, whether for turbofans or electric propulsors, create large gyroscopic forces. Therefore, a motor with a bearing holding the fan is heavier than the equivalent generator.

The specific mass for such motors is ~5kW/kg, whereas the generator is a bit higher at ~8kW/kg.

The four 2,332kW motors would then have a mass of 467kg each. Add a fan unit mass of 90kg and then put it all in a nacelle and on a pylon. In total our propulsors (with nacelles, fans, motors and pylons) will have a mass of 700kg each.

If we now put together our hybrid chain’s propulsor units, we have 4*700kg=2800kg. This is 33% more than our two turbofan propulsive units. We have still not counted the gasturbine core and its generator yet. Nor have we counted the battery or control electronics.

We will add these units in our next Corner and see where we land. We will also discuss whether our hybrid architecture might bring us some gains in the sizing of the components.