December 08, 2017, ©. Leeham Co: In the last Corner we described how the Wright Brothers developed their own engine, as there were no light engines on the market.

After understanding how to design wings, how to control the aircraft and having designed a suitable engine, the final item the Wrights needed was a working propeller.

Figure 1. The Wright engine for its 1903 Flier, driving the pusher propeller in the background through bicycle chains. Source: Wright-Brothers.org.

The Wrights turned to the Navy to learn what it knew about propellers. Not much. It didn’t even have a theory of how they worked. There was no established knowledge in the aeronautical sector as well. Propellers were made based on the experience from previous models.

Their efficiency was low, less than half of the engine’s shaft horsepower was transformed into propulsive thrust. The rest was propeller drag, heating the air or giving it a swirling motion.

Once again, the Wright Brother’s concluded they had to do it their own. The Wrights build a larger wind tunnel for propeller research. After trying different propeller types and blade profiles, they realized a propeller was a wing working in a rotating screw-like fashion. All their knowledge about wing profile lift, drag etc. applied. Gradually the Wright’s developed the world’s first propeller theory.

During the time the engine was building, we were engaged in some very heated discussions on the principles of screw propellers.

We had been unable to find anything of value in any of the works to which we had access, so that we worked out a theory of our own on the subject, and soon discovered, as we usually do, that all the propellers built heretofore are all wrong, and then built a pair of propellers 8 1/8 ft. in diameter, based on our theory, which are all right! (till we have a chance to test them down at Kitty Hawk and find out differently).

Isn’t it astonishing that all these secrets have been preserved for so many years just so that we could discover them!! Well, our propellers are so different from any that have been used before that they will have to either be a good deal better, or a good deal worse (Anderson, A History of Aerodynamics).

As a propeller rotates, the speed of the blade profile against the air is linearly dependent on the profiles radial position. At the blade tip, the speed is high in the rotation direction, V2 in Figure 2. 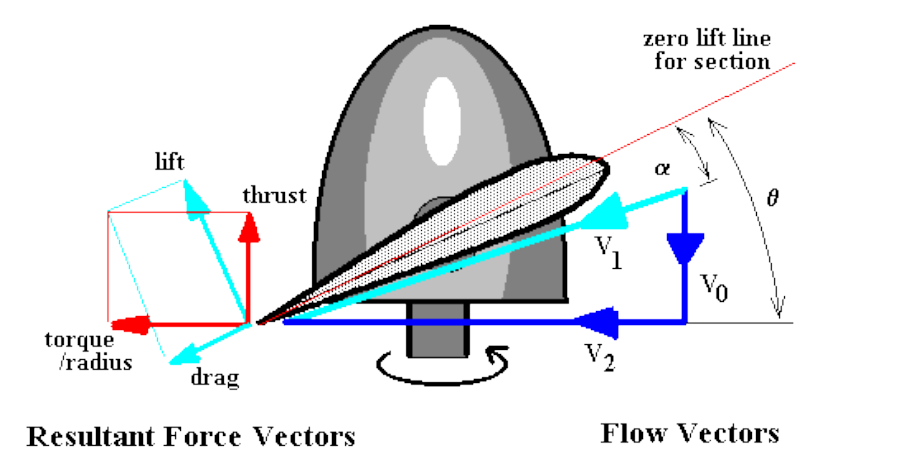 The propeller blades angle of attack is, therefore, the blade’s zero lift angle Ø minus the angle of the relative wind, V1 (note that propellers use the zero-lift angle as the reference for angle of attack for the blade. A wing uses the chord line which is equal to the blades pitch angle).

When an aircraft stands still or move slowly through the air, the propeller pitch Ø has to be low to get the blades angle of attack into the window for best lift-to-drag ratio. At high speed, the blades pitch shall be increased.

The forward speed of the Wright flyer was low enough so a fixed pitch propeller could work efficiently. The propeller on the first Wright Flyer, autumn 1903, had a 66% efficiency (Figure 2 A), a major improvement from previous propellers. 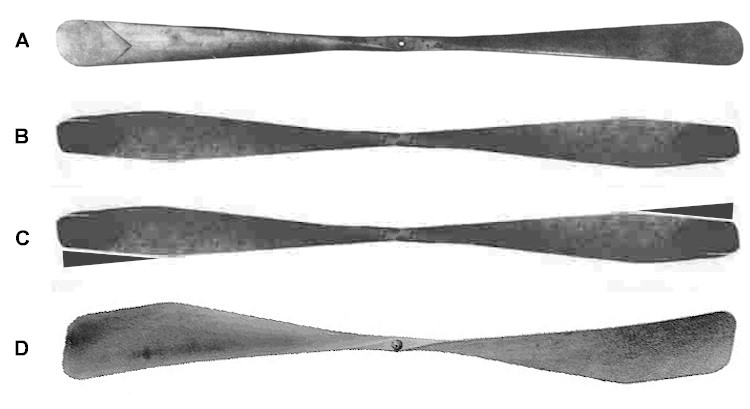 The brothers discovered that their first propellers (type A in Figure 2) bent during flight, increasing their pitch and therefore angle of attack over the optimum for the low speed of the Wright Flyers. The first correction was to make them stiffer (B), then to add “little jokers” (C) to twist the blades to lower pitch.

In (D), the propeller shape had changed to include the “jokers,” keeping the blades from twisting in the thrust direction. In the end, with these improvements, the Wright Brothers propellers had an efficiency of 78% by 1915.

Flight of the Wright Flyer

With all the components researched and available, the Wright’s could now build an engine driven aircraft to test during the 1903 autumn season, at the sand dunes of Kitty Hawk. This is the subject for the next Corner.