LNC believes China’s own self-interest for its airline, leasing and aerospace industry would make imposing tariffs on Boeing counter-productive.

Several media reports this week raise the prospect of China retaliating against Boeing, including these at CNBC and The New York Times. Boeing stock is off $10 or 3% in mid-day trading.

China accounts for about 5% of Boeing’s identified backlog but the total is believed to be much higher when Unidentified customers are included. 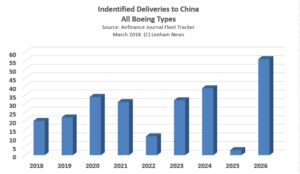 If China retaliates with tariffs, LNC believes it will be on other industries. Europe, for example, announced it will retaliate by imposing tariffs on the Harley Davidson motorcycle, Kentucky bourbon and Levi jeans.

If China were to retaliate against Boeing, it would more likely be in freezing new orders for an indefinite time, placing them with rival Airbus instead.