Embraer gears up for E2 delivery; a look at the 100-150 seat sector demand

The E190-E2 competes with the Bombardier CS100, a 110-seat airplane in one-class. Neither Airbus nor Boeing have a competing product. Each offers a larger airplane in the 125-150 sector, the A319neo and 737-7 MAX respectively. Embraer and Bombardier offer the E195-E2 and CS300 in this sub-sector.

Although the 100-150 sector often dismissed as a no-man’s land for airplanes, the potential is respectable—for the right airplane.

Bombardier forecasts a demand of 6,800, the most optimistic of any manufacturer—but more conservative than the Japan Aircraft Development Corp. JADC offers the most detailed sector-segment forecast.

Airbus stopped segmenting out this sector in 2014. The year before, it forecast a 20-year demand of about 4,100 airplanes. Boeing doesn’t segment the sector in its 20-year forecast, but earlier this year, the aerospace analyst at Cowen & Co. reported Boeing sees the sector demand between 3,000 and 5,000 aircraft. Boeing subsequently made oblique references to the sector when talking up its 7 MAX that were consistent with the Cowen report.

Airplanes in the 100-150 seat sector have indeed had a mixed success. 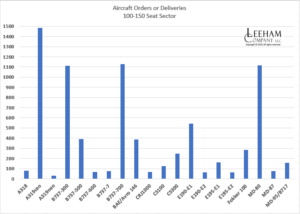 But only a few were specifically designed for the sector; the rest were derivatives. Also, some of the specific designs came from companies that were in financial straits or soon slid there.

The MD-95 was McDonnell Douglas’ last gasp in the commercial aviation market. By then MDC had been reduced to a mere 7% market share. MDC gave up and was acquired by Boeing in 1997. Boeing tried to sell the orphan airplane and gave up after 156 sales.

The BAE 146, a clean-sheet design for the sector, was a four-engine airplane and a fuselage so narrow that passengers complained bitterly about the six-abreast configuration. Many airlines reduced the configuration to five abreast, destroying the economics of the airplane. Still, it sold nearly 400 examples.

Embraer designed the first clean-sheet airplane that entered the sector with its E190/195. The first EJet entered service in 2004. The

Although the E2 is touted by Embraer to be a new airplane, its antecedents are clearly the original jet, now called the E1. The E190-E2 remains the same size as the E1, but the E195-E2 has 12 more seats, putting it into the 125-150 seat sector.

E2 sales have languished, however. Low fuel prices suppress sales and the labor scope clauses in the US, restricting the size of the airplanes that can be operated by regional carriers on behalf of the legacies, hurt as well.

Bombardier designed the first clean-sheet airplane specifically for the 100-150 seat sector since the E1 jet and the BAE 146. Every other design, by Airbus, Boeing, Fokker and McDonnell Douglas, was a derivative. Fokker was an ailing company and MDC became one.

And so was Bombardier.

Plagued by poor management that launched not only the C Series but also new corporate jet programs, Bombardier didn’t have the financial strength to take all these on at once. Misdirection that neglected the CRJ and Q400 commercial airplane programs that would have supplied cash flow further damaged Bombardier’s balance sheet and cash flow.

Driven to the edge of bankruptcy by C Series and corporate jet program delays, financial mismanagement and poor strategic decisions, Bombardier sold a majority interest in C Series to Airbus for $1. The completion of this deal is pending.

It remains to be seen if Airbus’ marketing and support system will make the C Series a success.

Even as Embraer prepares to deliver the first E2 next week, talks continue between Boeing, EMB and the Brazilian government about a combination of some sort between the two companies. The details remain fluid. The most recent suggest Boeing takes a 51% interest in a new company that includes only EMB’s commercial airplanes, excluding the corporate jets and military programs.

If a combination is achieved, Airbus and Boeing will have complete product lines from 100 to more than 400 seats, each with renewed strength in the low end of these sectors.

A market demand exists for the 100-150 seat sector. The right airplanes, and now the right companies, are converging to compete head-to-head.