April 24, 2018, © Leeham News: In the third article about Long-Haul LCC and if it’s a viable business, we described the operational costs for typical aircraft used by a Long-Haul LCC.

We now look at the revenue side of the equation, including how much revenue we need to cover our costs and what variations we have over the year.

To understand the revenue a Long-Haul LCC can earn on a trip of the type we analyze (JFK to London-Gatwick), we need to understand how the willingness to travel varies over the year on such a route.

There are few Long-Haul LCCs which are active over the Atlantic and therefore not too much data to analyze. The data from legacy carriers are not relevant, as the customer types which are addressed differs.

The legacy carrier has a large percentage of business travellers, where seasonal variation is lower than for the leisure traveler the Long-Haul LCCs targets.

A leisure traveler will travel for the yearly vacation and in addition around the major holiday weekends. For the Christian world, this would be Christmas, Easter and the summer months June to September. As an example of such variations, we show In Figure 1 the monthly Revenue per flown Seat Kilometer (RASK) variation for Norwegian. 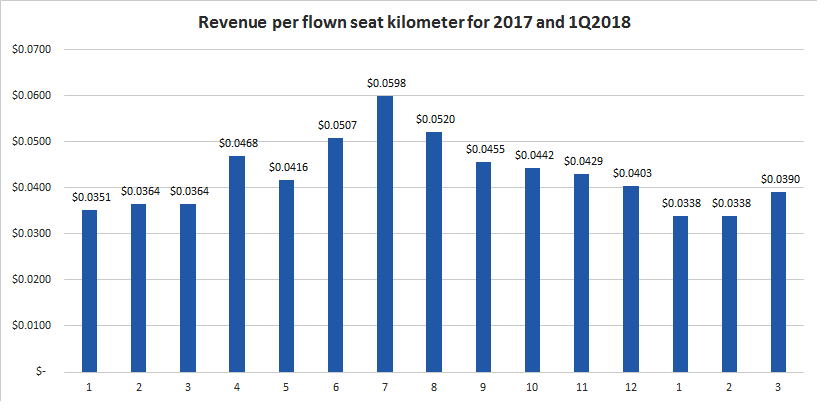 Figure 1. RASK for Norwegian during 2017 and for first Quarter 2018. Source: Norwegian and Leeham Co.

The RASK is the Revenue earned divided by the number of seats flown by the Norwegian fleet (both long-haul and short-haul) and the distance these seats fly. Multiply the RASK with the flown Available Seat Kilometer (ASK) and you have the revenue per month for the company for its flight operations.

From the graph, we can note the monthly variant of the revenue. There is a variation of almost two to one between the months. The best month is July, as expected, and the worst month is January.

The data includes both the Norwegian short-haul and long-haul flights. The long-haul fleet is approaching 50% of the produced seat kilometres for Norwegian during 2017. We could also see the seasonal variation has increased with an increasing long-haul operation. The long-haul passenger’s travel pattern is more seasonal than Norwegian’s intra-Europe traffic.

We can, therefore, assume the seasonal variation for a Long-Haul LCC like Norwegian will vary about plus/minus 50% around a mean, with the weak months in January/February and the peak in July.

The reason the load factors don’t vary more is that aggressive revenue management is used to fill the seats of the aircraft. The cost of flying the jets is there whether it transports passengers or not. The fuel costs in Figure 2 vary a bit with payload but this is marginal in the overall costs picture.

The overall principle is, it’s better to fill a seat than let it be empty, even if it’s sold at a bargain price.

We know from our costs in Figure 2 we need an average revenue for the flights of $41,500 for the Narrowbody aircraft and $75,300 for the Widebody to break even. This includes the 10% company overhead for selling the tickets and managing the company.

We also know the revenue will have a seasonal variation which will look something like Figure 1.  We will manage this with revenue management rather than leaving seats empty. Tickets will be cheaper in the off-season than for the summer months and around Christmas/New Year and Easter.

If we assume the route is daily and we strive for route break even in a first phase, we need a yearly revenue for the route of $15.2m for the Narrowbody and $27.5m for the Widebody.

This means we shall earn about $2m in peak months for the Narrowbody operation as there will be months where we will only earn $0.5m. For the Widebody, we need months with $3.5m as there will be winter months which only bring $1m.

Pricing to generate the revenue

In the next article, we will discuss how we shall price our different revenue management buckets during on and off-season to get our load factors to be within our assumed 83% to 95% range and generate the yearly revenue we need for the route.