March 16, 2021, © Leeham News: OEMs delivered 743 jet-powered passenger aircraft to airlines last year, compared with 1,684 at this cycle’s peak in 2018. The below chart shows the total for all OEMs as well as Airbus and Boeing (including McDonnell-Douglas). 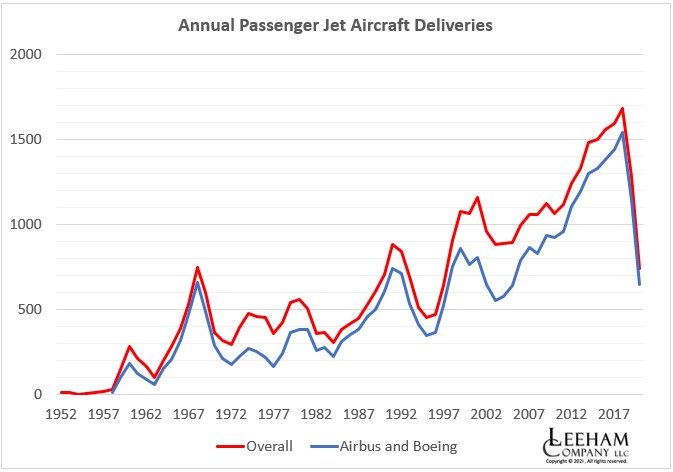 The last year with an overall lower delivery figure for passenger jets was 1997, with 641 units. For Airbus and Boeing combined, it was 2005. Airbus, with a total of 561 in 2020, needs to go back to 2011 to have a lower delivery figure, while the tally for the combined Boeing and McDonnell Douglas (a total of 86 passenger aircraft in 2020) goes back to 1963.

Below is a summary of the major slumps in passenger jet aircraft since the beginning of the jet age:

There were 609 single-aisle and 134 twin-aisle jet passenger aircraft deliveries in 2020, respectively. The last time deliveries were lower was 1997 for narrowbody and 2005 for widebody aircraft.

Below is a breakdown of last year’s passenger deliveries by OEM: 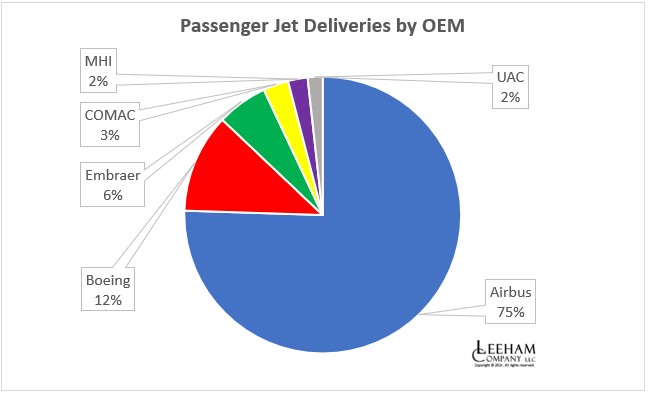 The COVID-19 pandemic has led many airlines to retire aircraft early. The retirements of quad-jet aircraft caught most of the media’s attention. However, there have also been numerous A330ceo retirements. Below is a summary of the twin-aisle passenger fleet changes between January 2020 and March 2021: 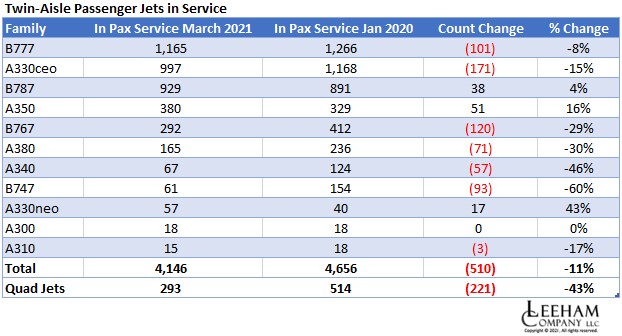 ← Pontifications: AerCap and GECAS to combine — assessing the impact
The A350, Part 10 Project Sunrise Intro →

110 Comments on “HOTR: Putting the 2020 Delivery Slump into historical perspective”