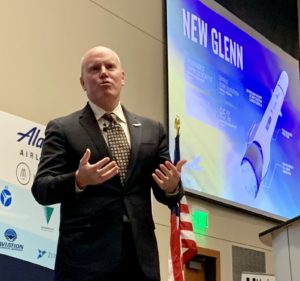 Smith’s remarks came just hours before the Air Force announced the contracts, worth more than $2 billion between the three companies. (The USAF has committed $792 million for Northrop Grumman and $967 million for ULA.)

Long term, Blue Origin sees a bigger market on the commercial side, though. It aims to drive down the cost of spaceflight, which will create new and wider demand, Smith said.

For now, the company is counting on space tourism to help it get there. It plans to fly its New Shepard in suborbital space in the first half of 2019. The capsule has room for six passengers.

What precisely comes after space tourism?

“My short answer is: I don’t know,” Smith said.

The longer answer–the company hopes–is that if spaceflight costs come down, that will be spur innovation and new demand.

“Throughout my career in the space industry, there have been all kind of business plans that have been on the shelf, and the reason they’re on the shelf is because literally they can’t get the business case to close because access to space is too costly,” he said.

Already, the company has received inquiries from colleges and even high schools about putting payloads on their New Shepard.

“We’re getting this very good validation that if you lower the cost of access to space you get the ability to actually go drive demand, get new demand,” Smith said.

In some respects, Blue Origin aims to develop the 737s of space travel—low operating costs, reliable performance, and quick turnaround times. Put another way, the company wants the New Glenn to be a rocket that can be flown often, at full load capacity, and with (relatively) cheap operating costs.

The company is developing reusable multistage rockets capable of launching and landing in all but severe weather and requiring as little service between flights as possible. “We want to fly it as often as possible,” he said.

Blue Origin’s second platform, the New Glenn, will be the second largest spacecraft by payload once it flies. To cut down service costs and time between flights, it will have a single configuration for payloads, Smith said.

It also will have a reusable first stage, which accounts for about 75 percent of the total vehicle’s cost, he said.

SpaceX’s Falcon Heavy has a significantly larger payload capacity: 70 tons for low-Earth orbit and 29 tons for geosychronous orbit. SpaceX, which is backed by Elon Musk, successfully launched Falcon Heavy in February, when it put Musk’s personal Tesla Roadster into an elliptical orbit around the sun. The car currently is slightly past Mars’ orbit, traveling at 39,505 mph, according to the website Where Is Roadster?

Blue Origin plans to fly New Glenn in 2021, Smith said during the conference.

As recently as July, a company executive told attendees at the 2018 APSAT Conference that first launch was scheduled for late 2020, Space News reported at the time.

In August, Reuters reported that the launch date could slip.

Blue Origin is rapidly expanding to keep up with its long to-do list.

Currently, the company has about 1,500 employees. “Keep a close eye on that” number, because it will start rising, Smith said. “We’ve got a lot of work on our hands.”

The vast majority—about 80 percent—of the company’s employees is based in Kent, WA, just south of Seattle. It also is expanding a manufacturing facility at Cape Canaveral, where its launch facility is, and it is opening a plant near Decatur, AL, to produce its BE-4 engine for United Launch Alliance’s Vulcan rocket.

“Our design and engineering will be here in Washington,” as well as a significant amount of its light manufacturing, Smith said.

The business environment in Washington “can always be better. We’d be remiss if we didn’t say that we’d like it to be better,” Smith said. “But that’s not an impediment” in the company’s decision to site work.

Likewise, the Decatur plant will produce BE-4 engines for ULA, whose plant is nearby.

One of the largest challenges remaining is getting the supply chain to expand to the capacity Blue Origin needs “in a very short time,” Smith said.

29 Comments on “Is Blue Origin making the 737 of spaceflight?”