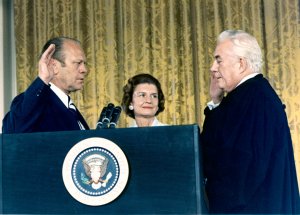 Gerald Ford is sworn in as president at the White House. Source: UPI.

These were the words of Gerald R. Ford, minutes after he was sworn in as the 38th President of the United States.

The events of Jan. 6 as Trump supporters invaded and occupied the Capitol proves our current, long national nightmare isn’t over yet. But it appears a crescendo was reached.

President-elect Joe Biden takes office Jan. 20. He’s got one huge mess bequeathed to him by Trump. Biden must end the COVID pandemic. He must repair the economy. He faces damaged US standing on the global stage. And he must repair the divisions within the US.

From Nixon to Ford

President Nixon was a criminal in the White House. His impeachment and conviction in Congress became a certainty. Loyal Republicans broke with the “smoking gun” tape proving he was guilty of obstruction of justice. Sen. Barry Goldwater, Cong. John Rhoads and Sen. High Scott met with Nixon to give him the political reality that he was through. Nixon resigned shortly thereafter.

As I watched the occupation of the Capitol, I could not help but think of the 1933 Reichstag Fire. The parallels seemed all too present.

The invasion and occupation of the Capitol was predictable. From his first ride down the escalator to declare his candidacy for the presidency, Trump incited the worst of the American psyche. Throughout his four years in the White House, Trump (and his family and allies) ramped up the inciting rhetoric.

Direct attacks on political institutions went beyond words. The Michigan Capitol was invaded twice by armed protesters, though no looting took place: in April and again in May. Armed protesters entered the Capitol in Olympia (WA), though no violence occurred.

Plans to target Jan. 6 and invade the Capitol were all over the Internet if one knew where to look. The invasion of the national Capitol wasn’t a spontaneous event.

Sen. Mitt Romney spoke on the Congressional floor after the insurrection was quelled and Congress’ Constitutional duty to record the electoral votes resumed.

He forcefully declared truth matters. It was remarkable that he felt compelled to say this. The newly sworn in President Ford, however, also talked about truth following the years of lies spread by Nixon and his allies.

“I believe that truth is the glue that holds government together, not only our Government but civilization itself,” Ford said. “That bond, though strained, is unbroken at home and abroad.”

I lived through the Watergate era. I watched with dismay as the Nixon Administration abused the truth and the Constitution. Watching what Trump and his allies did, and more alarmingly, the buy-in of 74 million voters, was appalling.

After Ford assumed the presidency, I was so proud of our country. Ford summed it up well.

“Our Constitution works; our great Republic is a government of laws and not of men. Here the people rule,” Ford said.

Members of Congress were adamant to return to the recently occupied chambers to complete their Constitutional duty. They wanted to demonstrate our democracy was intact. This sentiment reminded me of Ford, and of the determination after 9/11 in which Washington (DC) was a target of the terrorists.

“As we bind up the internal wounds of Watergate, more painful and more poisonous than those of foreign wars, let us restore the golden rule to our political process, and let brotherly love purge our hearts of suspicion and of hate.”

America and the United States will endure. It will take decades to undo the damage done over the last five years. Spirits willing, healing will happen.