June 3, 2022, ©. Leeham News: Last week, we looked at the powers and thermals of a Fuel Cell system for aircraft propulsion. Our example was a cryogenically cooled system with a superconducting Motor, Inverter, and Cabling.

Now we analyze the differences should we not use the liquid hydrogen (LH2) to help with cooling the system to a superconduction state. What are the thermal and mass consequences of using conventional electronics and motors? The detailed discussion is in the sister article Part 22P. Here we summarize the findings. 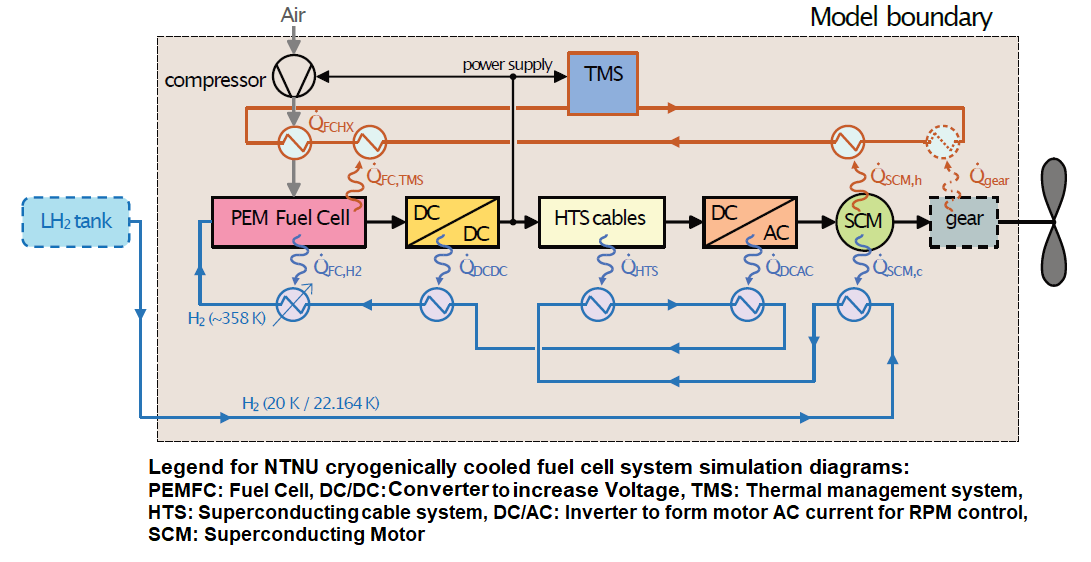 The present in-development fuel cell systems for airliners (Project Fresson, ZeroAvia, Universal Hydrogen) are all non-superconducting. It has to do with these using gaseous hydrogen as fuel and, therefore, the cooling capacity of liquid hydrogen (LH2) is missing. To use superconduction to bring down losses and masses for the system components, these projects must add a cryocooler, which means additional complexity and weight.

With liquid hydrogen as fuel, we open up several architectural choices. We can bring the Cabling/Inverter/Motor to superconduction like last week’s NTNU system or use it to help with the size and mass of the Thermal management system.

So which way is the best? Is liquid hydrogen necessary?

The sister article Part 22P analyzes all three cases and compares these to a baseline case, the present gas turbine system for a 70 seater turboprop like the ATR72. Here is a summary of the findings:

The 70 seater turboprop has an installation mass of the gas turbines, their fuel system, and Jet-A1 fuel for the maximum range mission of 6.1t. It gives the aircraft an 800nm range when transporting 70 passengers with bags.

The typical efficiency of the gas turbine alternative, defined as shaft power out to fuel power in, is 30%.

The fuel cell system we analyzed in Part 21 uses the cool sink from the liquid hydrogen (LH2) to maximum effect. It runs the LH2 past the Motor and Cable system to bring these to superconduction, then past the Inverter, Converter, and Fuel Cell, cooling these (blue path in Figure 1). The result of the superconduction is a system efficiency of 37%.

When doing the cooling, the H2 heats up from -253°C to the 80°C it needs before use in the Fuel Cell. The total system mass is 10.1t for this alternative, where the LH2 Tank at 3.1t and the Thermal management system at 1.9t are the heaviest parts. The 1.7t LH2 fuel has the same energy content as the 5t Jet-A1 of the baseline system.

Suppose we do not use the LH2 to bring the components to superconduction; instead, we use it to assist the thermal management system. In that case, the mass increases to 12t, and system efficiency decreases to 30%. Superconduction increases complexity, but it really helps with efficiency and system weight. The question is if there is a way past it for airliner fuel cell systems?

As a check, we also included a gaseous hydrogen alternative in 22P. The system now weighs 26t, 3t! more than the Maximum TakeOff Weight (MTOW) of the ATR72. System efficiency is at 30%.

It’s clear by these numbers that the current gaseous hydrogen projects are R&D projects to learn to master the multitude of challenges of airliner fuel cell systems. These are crawl before walk projects and have little to do with operational propulsion systems for airliners.