July 18, 2022, © Leeham News at Farnborough Air Show: Boeing started the Sustainability announcements by the big two by summarizing its Sustainability efforts to date and previewing Cascade, a web tool where we all can check the lifecycle effects of actions to support Net Zero at 2050. The tool supports all technologies and any real or concept aircraft of your making. Boeing also made announcements about supporting the Global scaling of SAF (Sustainable Aviation Fuel) together with Alder Fuels.

Airbus closed the day by announcing it had pre-ordered 400,000 tonnes of CO2 Direct Air Capture performed by 1PointFive. The pre-order is in cooperation with Air Canada, Air France-KLM, easyJet, IAG, LATAM, Lufthansa, and Virgin Atlantic. One million tonnes of CO2 will be captured at a new Texas site by 2024 and then permanently stored in old oil wells.

Both companies stressed that Sustainability is, like Safety, not a competition item; instead, we must all contribute, and there is no single solution or entity that will get us to net zero by 2050. 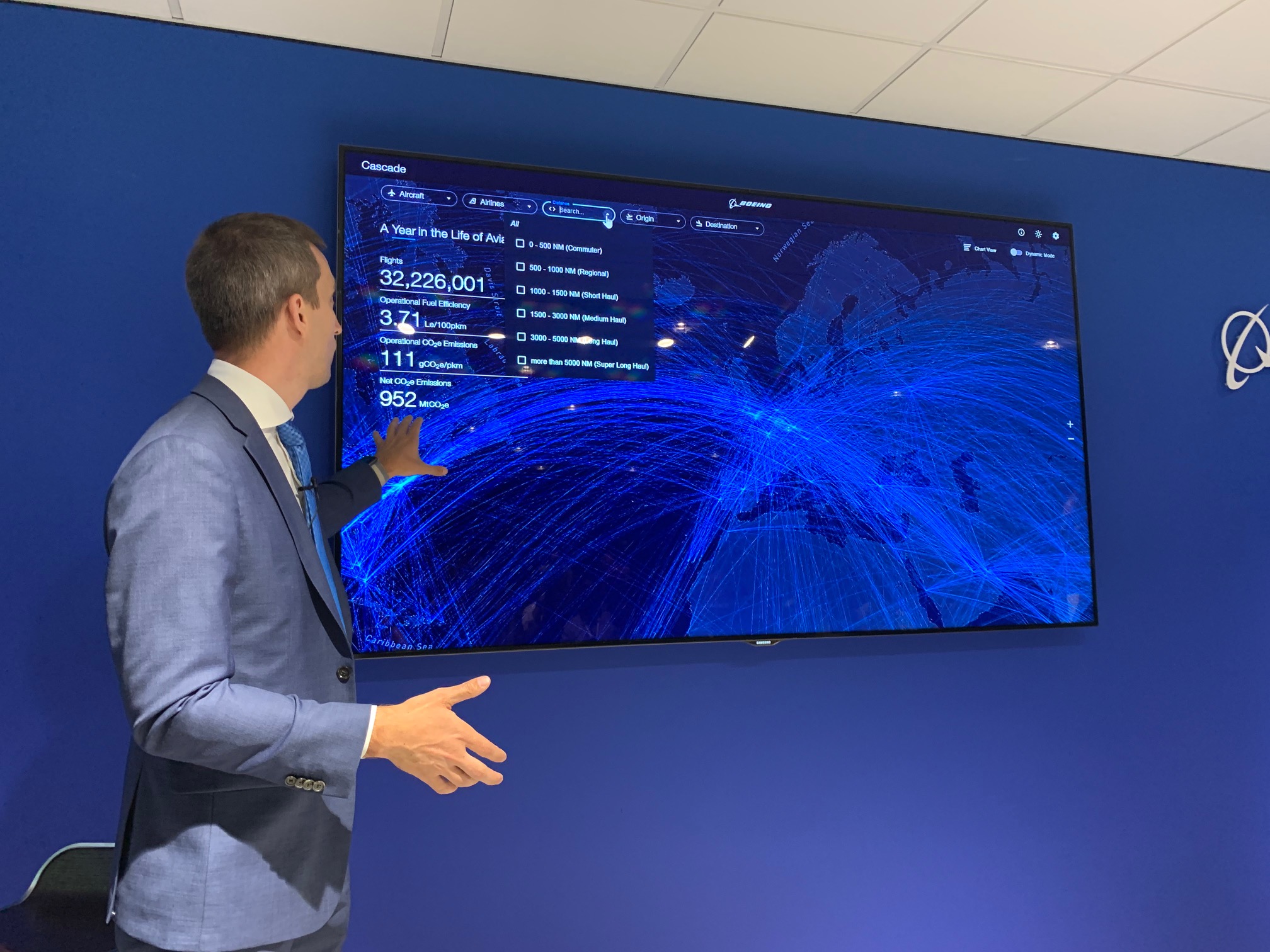 It was fitting that the Monday at Farnborough International Airshow was the hottest in British history with 39°C/102F. Global warming is real, and it’s going faster than we all would like.

The message from Boeing and Airbus was the time for talk and posturing is over, and it’s now concrete actions that count.

Boeing emphasized it’s not a Sustainability laggard; it has just chosen a realistic path. There are over 20,000 aircraft flying each day, and any new aircraft type (hydrogen or whatever) will turn the Global Warming dials little by 2050.

The reality is that we need massive investment in SAF as all aircraft can fly on it in blended form, and the replacement of old gas guzzlers with new economic planes is the other major action we can do that has a real effect.

To get us all to realize the actual effects of, say, introducing a new propulsion type to regional aircraft by the second half of this decade will have a minuscule 0.5% effect on our CO2 footprint by 2050, Boeing has developed Cascade (Figure 1).

Cascade is a data modeling tool Boeing created in cooperation with leading universities. The tool appraises the potential for different technologies and actions to reduce emissions through:

The Cascade model assesses the full lifecycle impacts of renewable energy by accounting for the emissions required to produce, distribute and use alternative energy carriers such as hydrogen, electricity, and SAF.

Cascade is not ready for prime time yet (it’s in beta test with University partners), but once we can get our hands on it, we will review it. It’s a good approach, and we will all learn a lot from it, is my feeling. Its results will, of course, depend on the assumptions driving the model, but these are things that can be tuned. 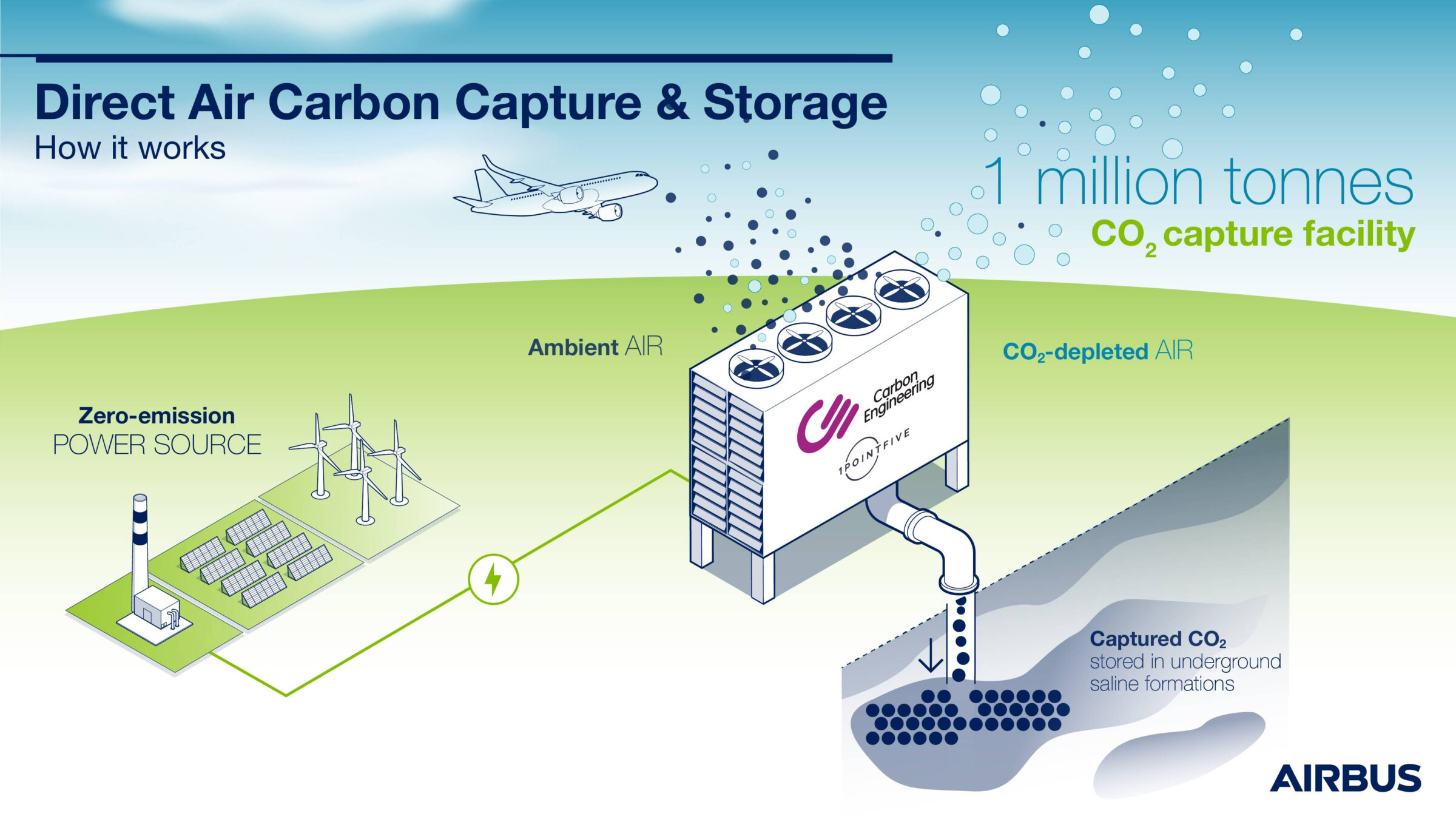 “The Direct Carbon Capture is established technology, and the storing of the CO2 in used Oil wells builds on the extensive knowledge we have from using CO2 injection to the wells to further the extraction of oil,” says the CEO of 1PointFive, Steve Kelly. “Our 1 million tonne facility will be placed in Texas where we have suitable wells for storage and extensive knowledge of the technology.”

“The Direct Carbon Capture with Storage is an important technology, but it’s also a component of producing SAF from water electrolysis where we need to add Carbon to a Hydrogen intermediate step,” says Airbus Head of Sustainability & Environment Nicolas Chretien. “This makes Carbon Capture so interesting. Carbon Capture it’s an affordable and scalable complement to other actions, and today’s record heats show we are already late and need all means we have. Sustainability is, like Safety, not a competitive item. We all need to cooperate to achieve our 2050 goal of net-zero emissions.”