I had the opportunity this month to join a group of 50 aviation geeks on the first international passenger flight of a Douglas DC-7 in decades. 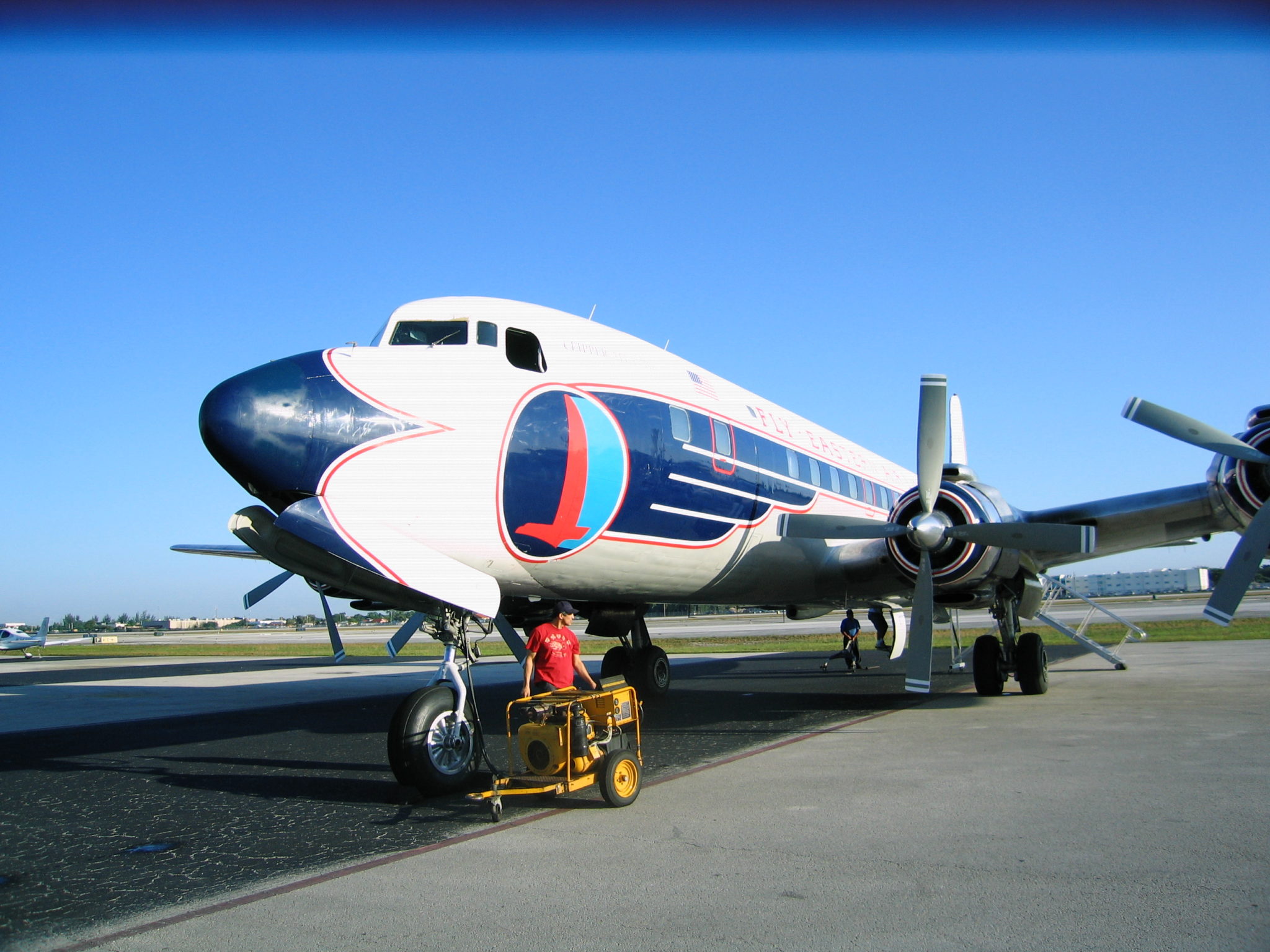 This airplane, N836D, was delivered to Eastern Airlines in 1958. It flew with Eastern for about seven years and was sold to the Nomad travel club, which operated it for a number of years, still with the EA interior, before selling it to a third party who intended to create another travel club but never completed funding. It sat in St. Paul (MN) for 33 years until the owner of Florida Air Transport (FAT) discovered it and bought it. The Historical Flight Foundation was created for restoration to full EAL 1958 colors.

Ralph Pettersen, who was on the HFF trip, several years ago wrote this article with photos of the interior of the DC-7B as it had been stored at the St. Paul Airport.

Wikipedia has this history of the DC-7. Eastern ordered 49 DC-7Bs, more than any other carrier. According to the book, From the Captain to the Colonel, a history of Eastern by the late Robert Serling, EAL’s CEO Capt. Eddie Rickenbacker over-ordered the DC-7, knowing the jet-powered Boeing 707 and Douglas DC-8 were around the corner. (Eastern ordered the DC-8.) According to the book, had Eastern ordered fewer DC-7s and Lockheed Electras and more DC-8s, Eastern would not have been at a competitive disadvantage during the early years of the jet age.

Child of the Jet Age

This trip was, to me, a chance of a life time for several reasons. First, I’m literally a child of the jet age. My first airliner flight wasn’t until 1964, when I was an early-teenager. It was an Ozark Airlines F-27 from Chicago O’Hare to Peoria. The large windows and the high-wing airplane made for great views and the short hop from ORD meant we were at a relatively low altitude. This was how I fell in love with the airline business.

Through the years, I’ve ridden on the deHavilland Twin Otter, the four-engine Dash-7, the Dash-8, the Convair 580 and the Hawker-Siddeley HS748, all prop-jet airliners (in addition to a variety of jets, of course). I’ve done the obligatory 20-minute air show ride in the DC-3 and I’ve had rides in the Boeing B-17 and Consolidated B-24, as well as the Convair C-131 (CV-240) and deHavilland Beaver.  But I never have been in the Electra or Viscount and certainly not DC-four engine transports or the Lockheed Constellation.

So this DC-7B trip, offered through the UK travel tour company Ian Allan, with 12 hours of flying, promised to be a real thrill.

The broad story is noted above through Ralph Pettersen’s article and through this link at the HFF. The plane has been airworthy for some time, but elements of the restoration continue. The pressurization system has not been restored, limiting flights to 10,000 ft and below–which isn’t all bad because in good weather, we had some fabulous views of the Caribbean and the islands to and from Puerto Rico and St. Maarten. At various times, we flew at 1,000 ft between San Juan and St. Maarten (and 5,000 ft on the return); and at 9,000 ft or so to and from Florida.

Neither has the air conditioning system been restored yet, which caused some issues in the warm, Caribbean and south Florida climates. Ramp time and the low-level, 1,000 foot flight were especially challenging.

As any aviation geek knows, the Curtis-Wright compound engines of the DC-7 were cantankerous and prone to failure. Interestingly, HFF president Roger Jarmen told me that this was because the airlines all pushed the engines to maximum performance and the strain caused the failures. But back off the power settings, and the engines are reliable. HFF does this for reliability and fuel conservation, operating the engines at 25% less than rated power.

In addition to the unpressurized, non-air conditioned flights at low altitudes, we cruised at only 200 mph. The experience, therefore, was more akin to the DC-4 than the DC-7. This really gave us a taste of what post-war aviation was about (and why it took 4 1/2 hours from Miami to San Juan and another 1 1/2 hours to St. Maarten).

The noise and vibration vs. jets was another element I was interested in experiencing. Naturally we all know how quiet and smooth jet flight is, but you don’t have a true understanding of the jet revolution from pistons until you have done a piston-pounder flight like this. Although books will tell you the back of a piston plane is quieter than the front (hence, that’s where first class seating was in the piston era), I frankly didn’t notice much difference.

I clearly noticed the increased noise level, shaking and vibration vs. jets. It’s just not quiet, period. But I found I could actually fall asleep easier and more soundly on the DC-7 than on a jet because of the rhythmic vibration.

As noted above, we went from Florida to Puerto Rico to St. Maarten and reversed the routing to return.

We landed at the St. Maarten Juliana Airport, where landings are just feet over the beach and adjoining roadway.

HFF/EAL DC-7B on final approach to the famous St. Maarten Airport, where planes land within feet of the beach. HFF did a special take-off and landing over the beach so the tour group could get airborne shots of this airplane. Photo by Scott Hamilton.

St. Maarten is the only island divided by two countries: the Dutch have in the south and the French half in the north.

On the return, we fleet to Puerto Rico’s Rafael Hernandez Airport on the west end of the island to clear customs.  Here is our flight track to Opa-Locka Airport in Miami.

The Return of Eastern Airlines

As word spread at San Juan that this restored EAL DC-7 would be stopping for customs paperwork en route to St. Maarten, retired EA employees asked if they could meet the airplane and get a tour. The HFF and Ian Allan were happy to accommodate this request.

It was quite the meet-and-greet. The San Juan Airport fire department gave us a water cannon salute; all the local TV and print media were there, along with dignitaries. 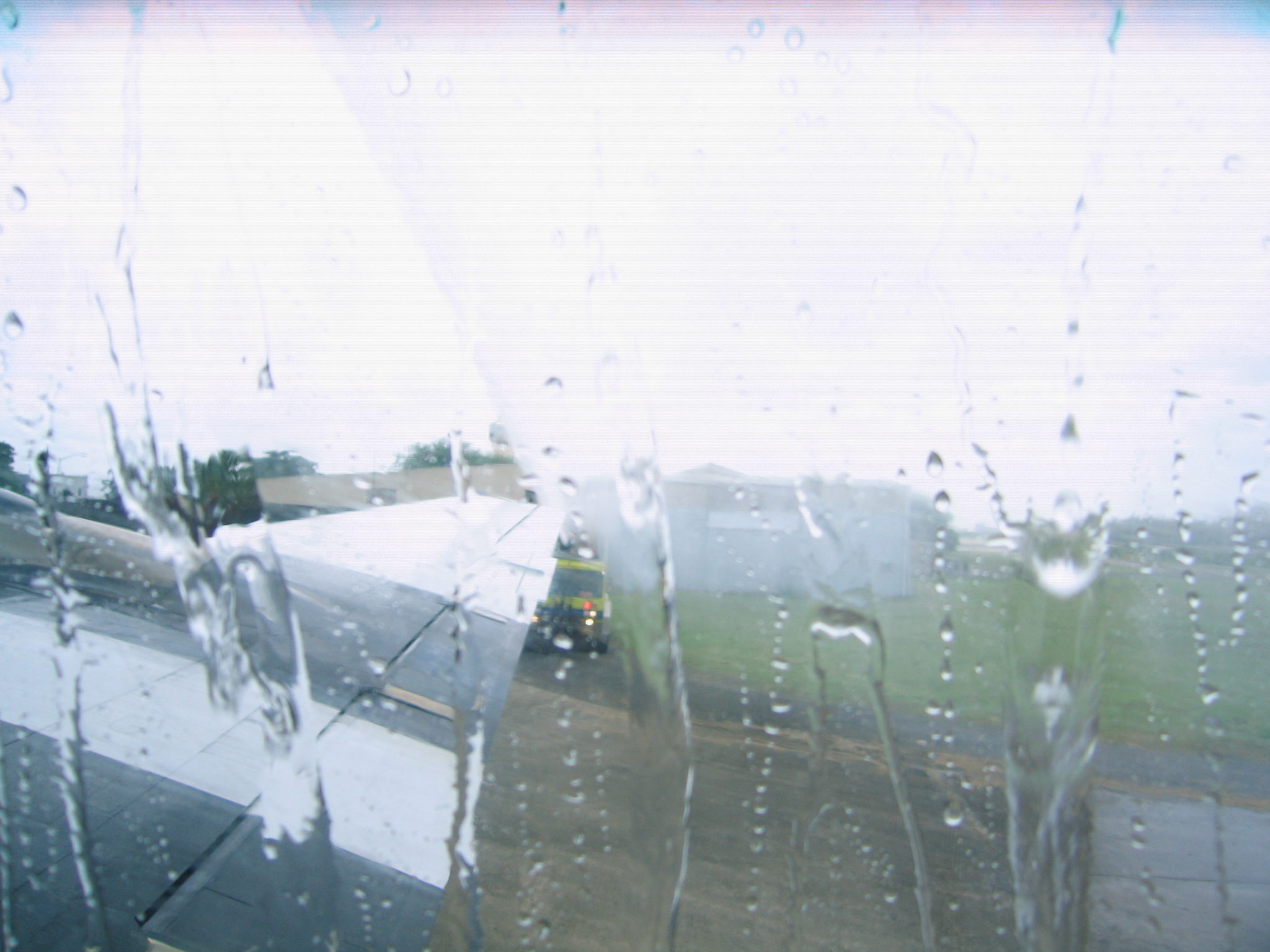 It looks like rain but this is the fire department water cannon salute at San Juan Airport provided the arrival of the restored Eastern Airlines DC-7B. Photo by Scott Hamilton.

A large crowd of perhaps 150 people greeted the airplane. The event made all the local media plus it was picked up by MSNBC and a New York City TV station. 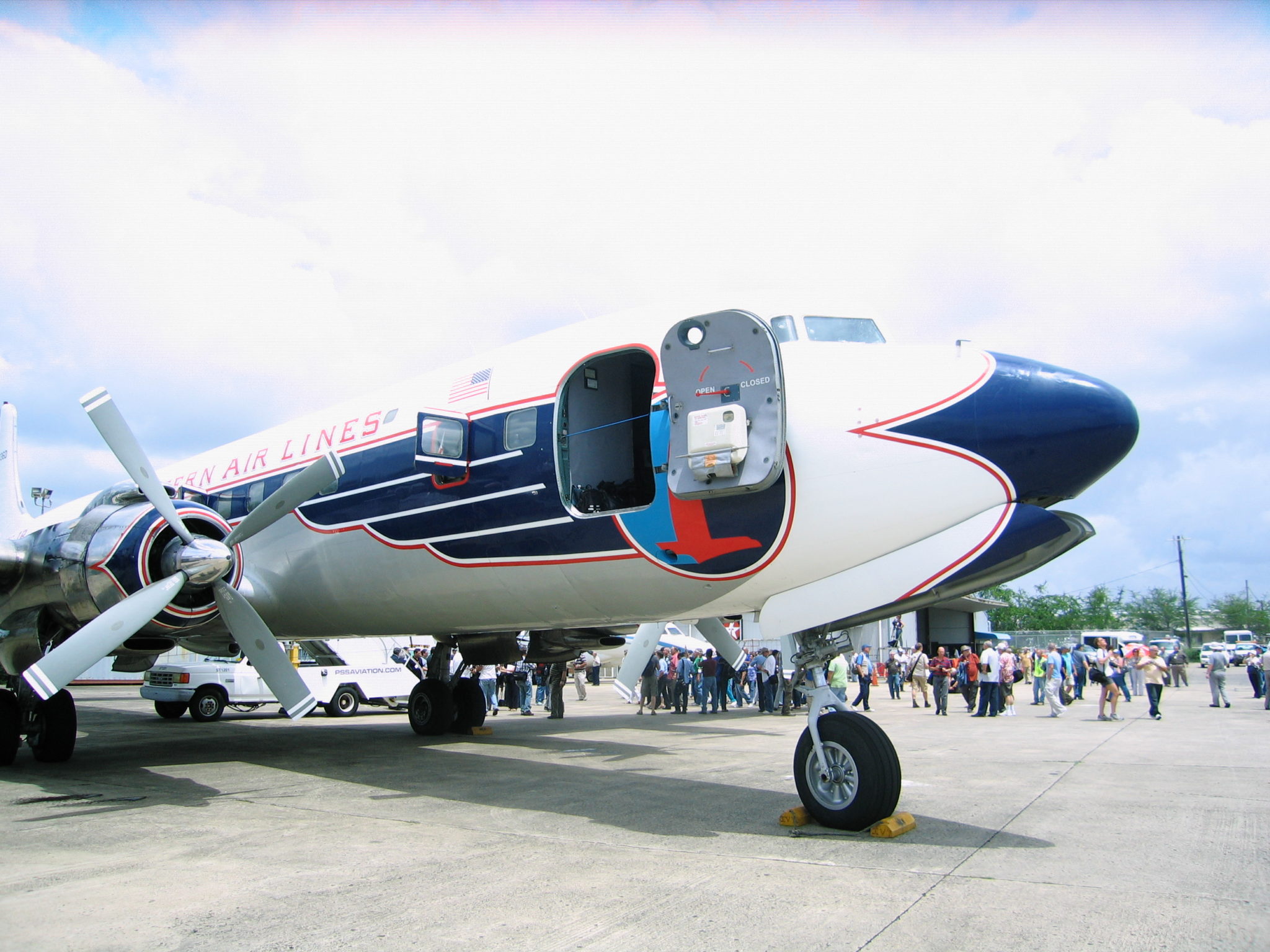 The DC-7B at San Juan, with part of the retired EAL employees, dignitaries on other on-lookers in the background. Photo by Scott Hamilton.

Landing, taxiing and take-off proved to be a real show-stopper at the airport as employees from all companies stopped to watch. Our take-off completely stopped the productivity of all the American Airlines ramp workers.

At St. Maarten, the HFF enlisted the cooperation of the local ATC for the short photo-hop, including taking along a couple of controllers for the ride. Our departure to Puerto Rico (for customs and immigration clearance) and to Opa-Locka was delayed three hours by rain, so we were all deposited in the secure area of the terminal to wait for the weather to clear. Our waiting area was at ground level; coffee and sandwich shops were up the stairs. When the weather cleared and we were to board our airport bus for the ride to the plane, our group was scattered between the two floors. Although we were on a Florida Air Transport flight number, at my suggestion, the Menzies gate agent called, “Eastern flight 502 for Miami now ready for boarding….” It’s the first time this has been heard since Eastern ceased operations 20 years ago. 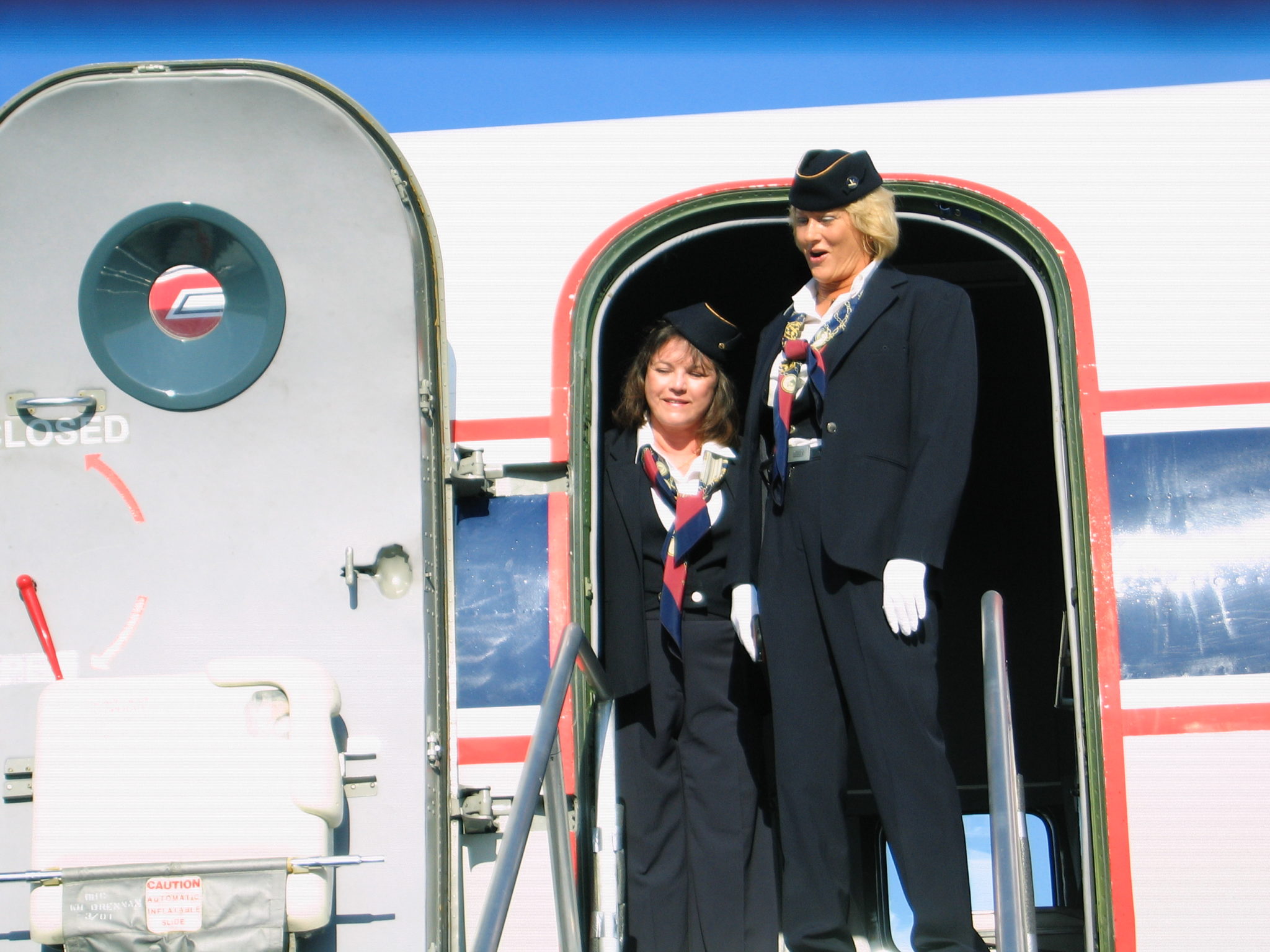 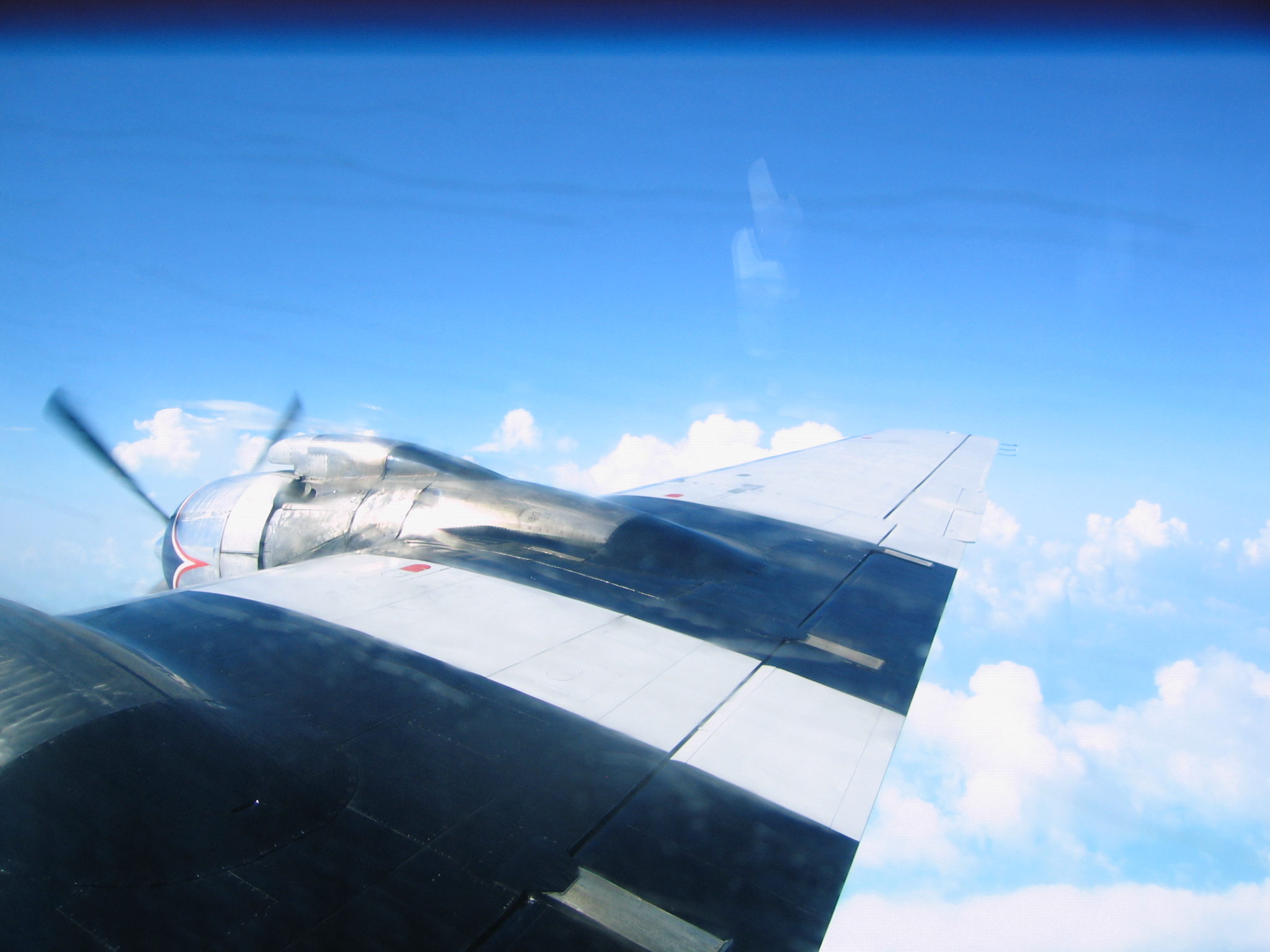 At 9,000 ft from Opa-Locka to San Juan. Photo by Scott Hamilton. 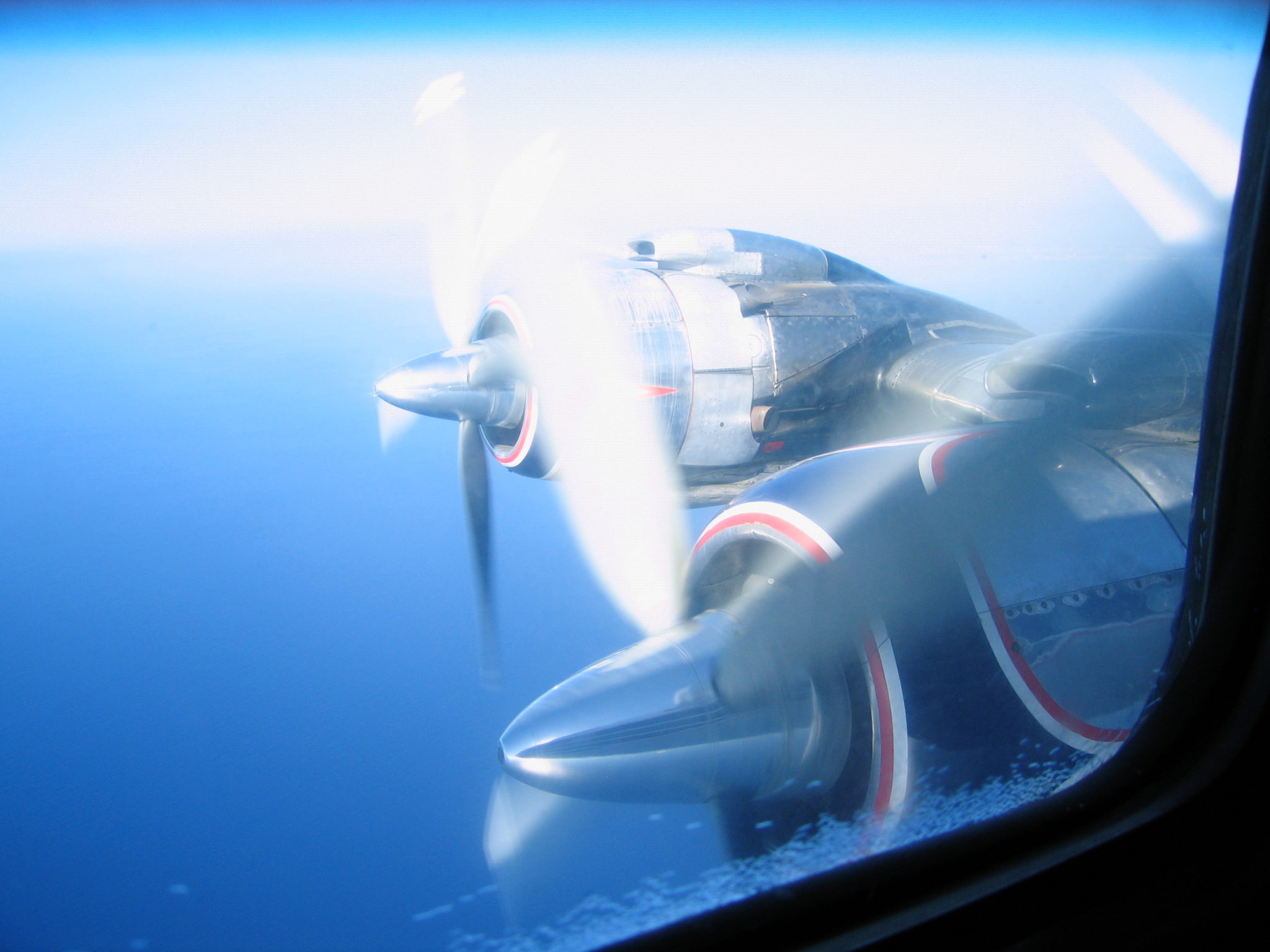 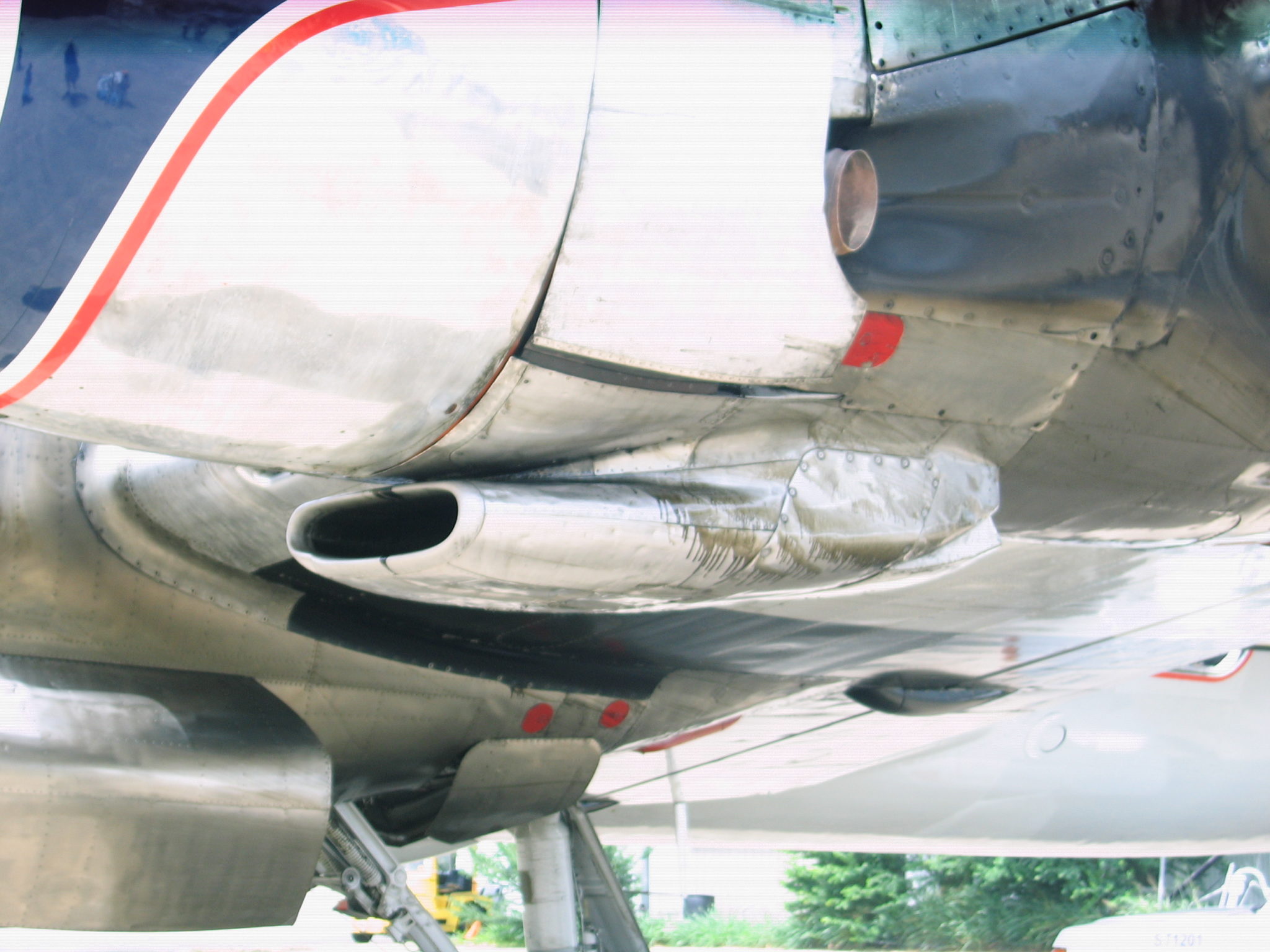 “Check the gas, fill the oil.” That’s what HFF says is the standard line for big recips, which consume oil (not burns it). You can see the oil drips on the ramp at San Juan, from our flight over from Miami. The tops of the wing, painted black in the photo above, hides the trailing oil leaking from the engines during flight. When we boarded the airplane at Opa-Locka, I was amused to see oil spots on the windows aft of the engines. Photo by Scott Hamilton.

HFF is considering a DC-7 trip to Central America, but nothing has been announced or arranged at this time.

Needless to say, this was a fabulous trip. HFF has done a marvelous job of restoring the airplane to the colors and to flying condition. Work continues on the A/C and perhaps the pressurization. The interior for now consists of lavs and seats from a dismantled DC-9; to restore the DC-7 seats would cost $200 per and at this stage, HFF doesn’t have that money. The interior hat-racks are absent–Airliners.net readers say there is a certification issue, but I didn’t know about this so I didn’t ask. But these non-era issues are minor compared with the overall experience.

HFF takes the airplane occasionally to air shows. Check its website for information. Also watch for the new ABC TV series, “Pan Am” (which by description sounds perfectly awful); N836D makes an appearance in Pan Am colors. A photo is on the HFF website.