Peter Goutiere, the focus of the CNN piece, is a remarkable man. He’ll be 100 this month and is sharp as a tack with a memory of his World War II days that is crisp and clear. As he stood before his old Douglas C-47/DC-3, now owned by the Historical Flight Foundation in Everett (WA), recounting some of his stories, the emotional experience brought tears to his eyes–a touching moment for someone reunited with an airplane that played an important part of his life during the Greatest Generation.

Peter Goutiere, 100, is one of only two living members of China National Aviation Corp’s pilot group from WW II. Behind him is probably the only surviving Douglas C-47/DC-3 from CNAC. Photo by Scott Hamilton

The DC-3, as we note in the CNN story, began life as a C-47 in 1944, shortly have the momentous D-Day, the invasion by the Allies on the French beaches. Goutiere tried to enlist in the US Army Air Corp right after Pearl Harbor. Already a pilot–still somewhat rare in those days–you would think he would have been snapped up by an understaffed military now at war. But the cut-off age was 26 1/2 and he was 27, so he was rejected. Instead, Goutiere joined Pan American Ferries and spent the War ferrying airplanes, first from Miami to Africa, then to India, where he joined CNAC to carry cargo, supplies and fuel to the armies and air forces in China. 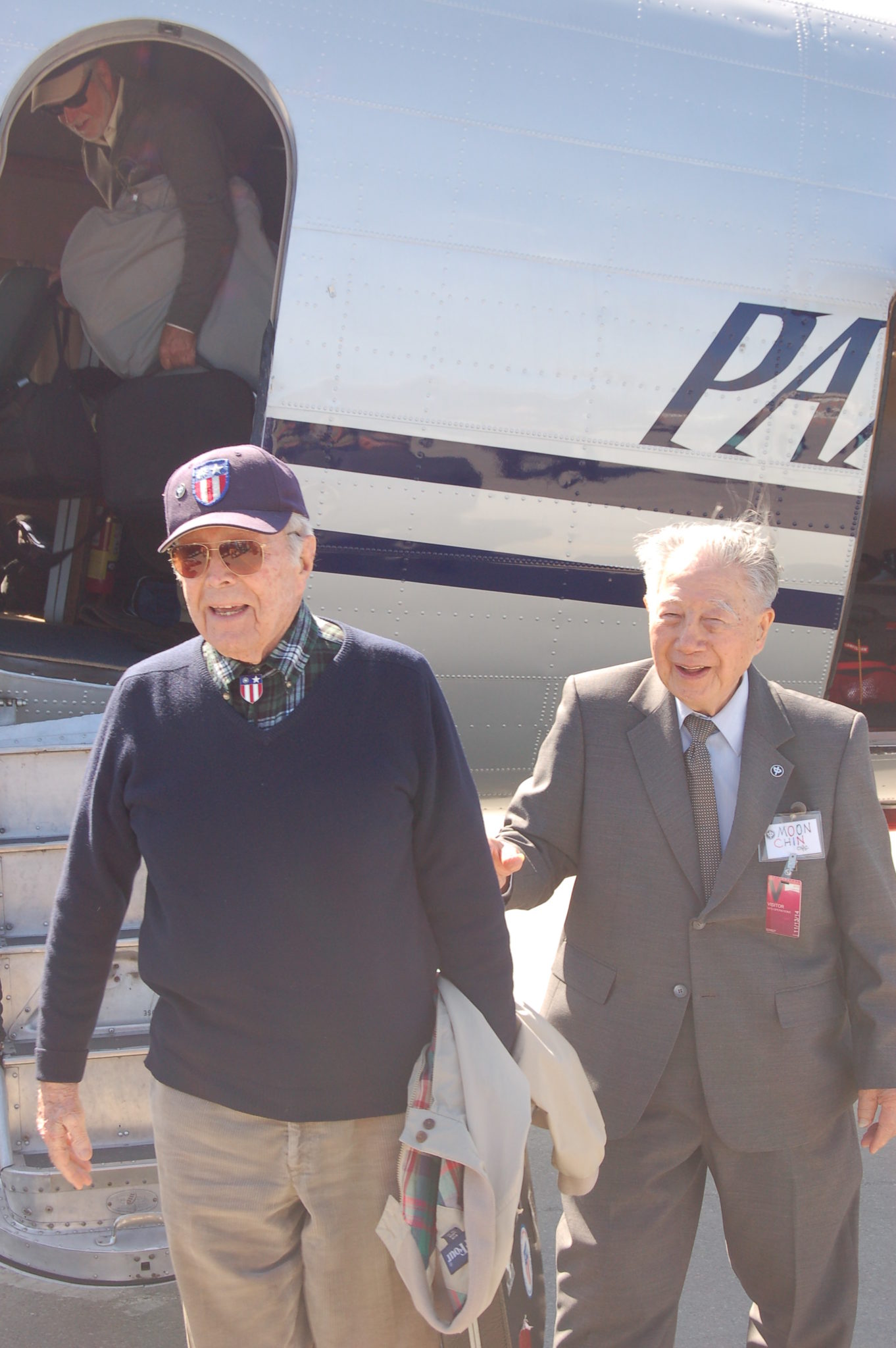 Peter Goutiere and Moon Chin are the two living pilots from CNAC from World War II. Chin set a record for the number of people carried on a C-47/DC-3: 71. Among them was Col. Jimmy Doolittle, escaping China after his famous raid on Tokyo in April 1942. Photo by Scott Hamilton

This year’s reunion was at the San Francisco International Airport, in the airport’s main Museum Gallery in the International Terminal public area. It’s one of 19 galleries throughout the airport. The Museum specially created an exhibition of the CNAC era immediately before and after WW II, but with emphasis on the wartime service. There is also a good display of jetliners in 1:100 or 1:50 scale of interest. When one has spare time at SFO, be sure and look for the galleries. The displays are changed about every six months.

We’ve written about the Historic Flight Foundation’s DC-3 a few times previously, and have been airborne on the plane twice for hour-long fly-arounds the Puget Sound area. This trip was the longest HFF took the airplane since acquisition in 2006. 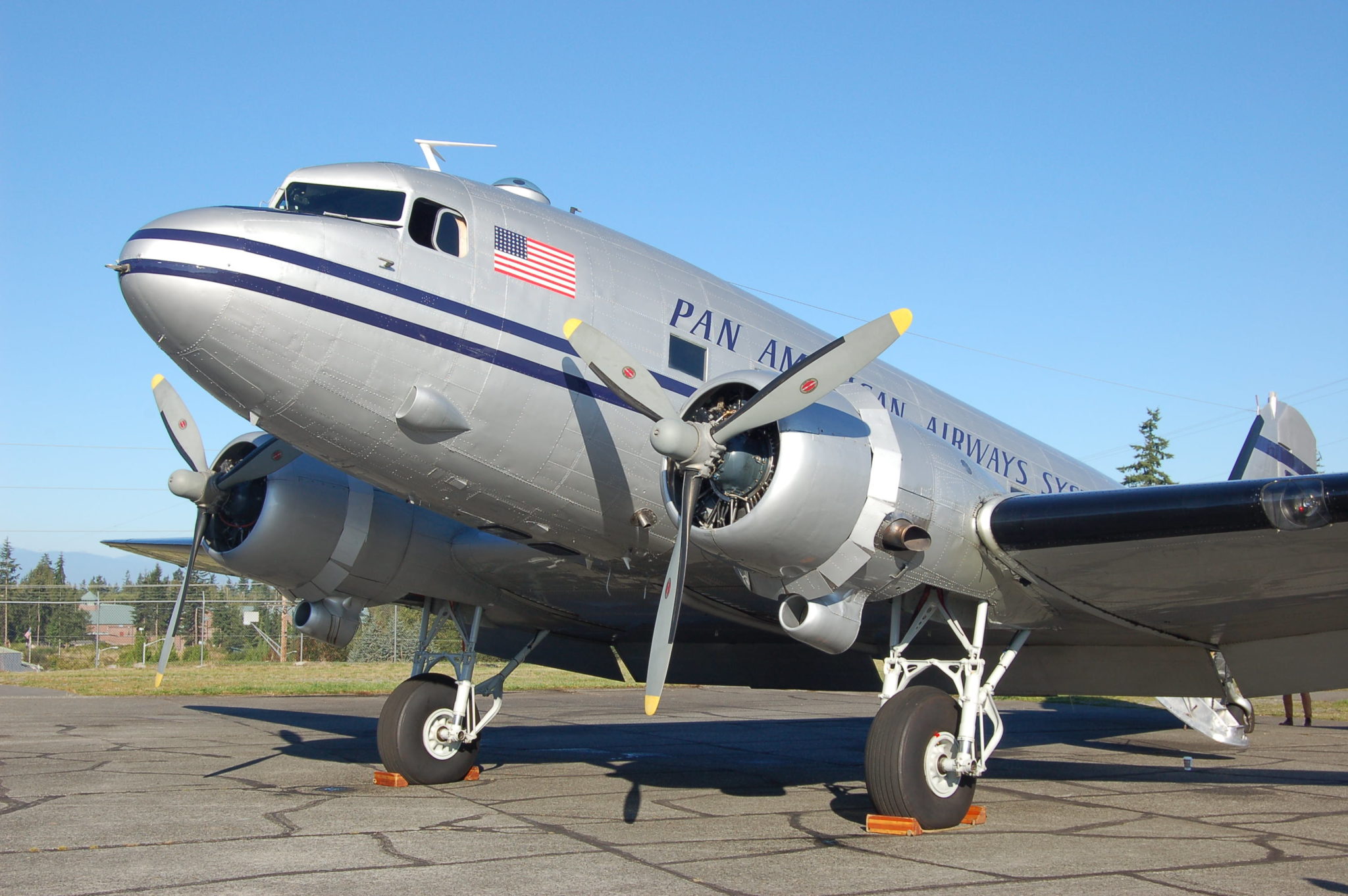 This Douglas DC-3 began life as a C-47 in 1944. It was delivered by Peter Goutiere to China National Aviation Corp. in August 1944 in India. Thereafter it flew the Hump during WW II. The airplane was acquired in 2006 by the Historic Flight Foundation and is airworthy, making rounds to air shows and giving rides. Photo by Scott Hamilton

The flight from Everett to SFO took just under five hours, due to the need to divert around wildfires in Northern California.

These are mountains in Northern California, obscured by smoke on Sept. 5, 2014. This is taken from a Douglas DC-3 flight by the Historic Flight Foundation of Everett (WA). We had to climb to 13,800 ft to avoid the restricted airspace over the fires. The airspace was reserved for aerial firefighting tankers. The DC-3 made the climb effortlessly. Photo by Scott Hamilton

The trusty old DC-3 plodded along at about 150 knots ground speed. In five hours, a Boeing 737 could fly from Seattle to New York (excluding ground time). The experience really demonstrated just how far aviation has come. The return flight was four hours, with a ground speed of 167 knots.

Liz Matzelle is HFF’s unofficial historian for the DC-3 and has compiled a remarkable record of the plane’s history.

HFF has about a dozen airplanes, principally fighters and bombers, all airworthy. It also has the deHavilland Beaver and the Beech C-45, the military designation of the civilian Beech 18.  Founder John Sessions wants airplanes that have a “story” behind them, representing the two decades from 1937-1957 that illustrate advances in aviation. The museum is staffed by volunteers who pilot and maintain the airplanes and who administer and run the museum.  It’s a short distance from Paul Allen’s Heritage Flight museum, the Museum of Flight’s Restoration Center and the Future of Flight Museum.