Electronic check-in is out in new US security plan 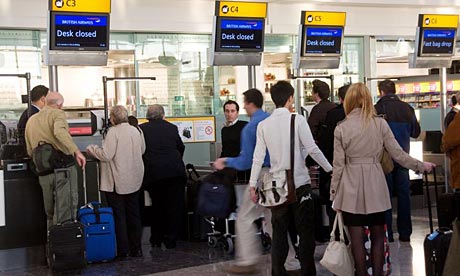 July 13, 2017. © Leeham Co.: If you thought the US government ban on carrying electronic devices on board airliners in the name of heightened security was bad, that was going to be a minor inconvenience compared with what is in the works, LNC has learned.

The US Department of Homeland Security may announce as soon as next week a series of revisions to check-in procedures outside the US that will set the airline world back 30 years.

An international carrier advised LNC of the following, revised procedures DHS has notified it that will be put in place between now and October.

Electronic check-in is out

Kiosk and on-line check-in for inbound international passengers will be out.

DHS wants a human agent to ask each person the usual questions: “Did you pack your own bag? Has it been out of your possession at any time? Has anyone asked you to carry something onto the aircraft?”

(Note: On this one, upon returning from the Paris Air Show, LNC checked in using the kiosk and received these questions at boarding. This may not be especially new.)

If the answers are deemed sufficiently high-risk, the passenger will be separated from his/her party — even if traveling with children for high-intensity screening in a separate holding area at the gate. The passenger will not be allowed to rejoin or communicate with the rest of the party until after boarding the aircraft.

One hundred percent of US-bound passengers will have their carry-on bags swiped for explosive particles, just like TSA does randomly today.

Once announced, the new measures take effect within 21 days through October, LNC is told.

It’s unclear if these new procedures will be applicable at airports where the US has pre-clearance arrangements (all of Canada and some other locations in Ireland and the Middle East.)