April 27, 2018, ©. Leeham News: In the last Corner we discussed the problems with the long term stability of an aircraft. The aircraft deviates gradually in pitch, roll and in a combined yaw and roll mode if left without pilot input.

To hand fly such an aircraft on long routes is tiresome (been there, done that). For these occasions, one needs an assistant, an autopilot.

We will describe autopilots from the simplest to those used in airliners. All stabilize the divergence modes we described in the last Corner. Then dependent on model and price, they add functions.

The most nerving divergence mode is the Spiral mode, as normally the Dutch Roll is adequately damped where pilot and passengers sit in a small aircraft (which is close to the centre of gravity). For airliners, the passengers are more spread out and the rear of an airliner cabin is sensitive to the smallest Dutch Roll.

To stabilize an aircraft from the Spiral mode we need roll stabilization. The simplest way to achieve this is to put a sensor on the turn indicator gyro, one of the base instruments in an aircraft.

An autopilot system which replaces the normal turn and bank indicator with a version with a sensor and the electronics to control the roll from the signal is shown in Figure 1.

We now have an aircraft which is stable in roll. If we add a signal from a directional gyro we can hold a heading and with a signal from a navigation instrument, like a VOR/LOC receiver or a GPS navigator, we can follow a track.

If we add the three components for keeping altitude shown in Figure 2, we have a two-axis autopilot which can control both roll and altitude. 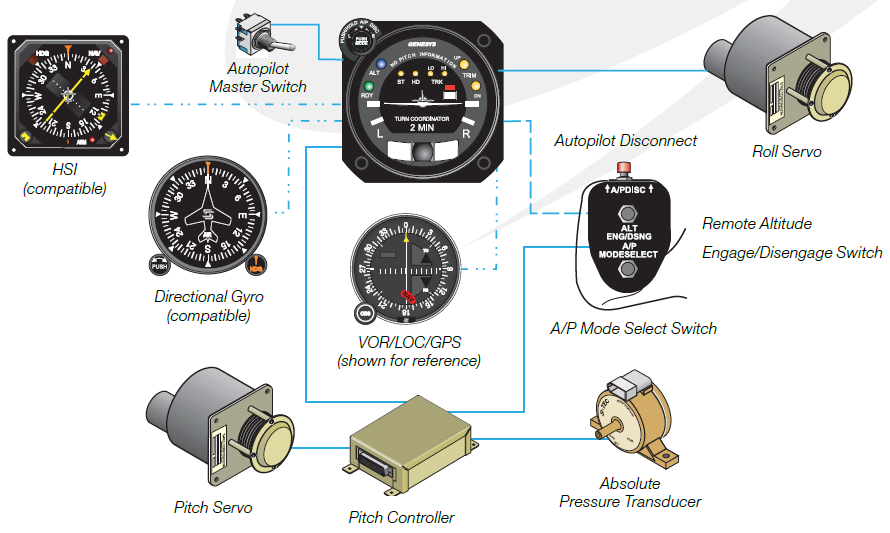 Now we control both the Spiral and Phugoid modes and through coupling to signals from directional gyros, Nav equipment and a pressure sensor we can keep heading (the nose pointing in a direction), course (we track a line in nature while compensating for wind) and altitude. We are now at $16,000 for the autopilot parts.

This autopilot cannot keep a pitch angle other than for flying level and it can’t control a climb or descent. But it’s straightforward for the pilot to control this for climbs out of and descents into airports for a slow general aviation aircraft.

To have an autopilot which can control climb and descent besides flying straight and level, we need a more advanced gyro platform than a turn indicator gyro. Such autopilots we will discuss in the next Corner.