The report is 78 pages and gives added information in several areas. Rather than repeat what has been reported before, the article is focused on what new facts are revealed and we make some observations around these facts.

The report releases part of the information from the recovered memory of the Flight Data Recorder (FDR) in addition to other circumstantial data. 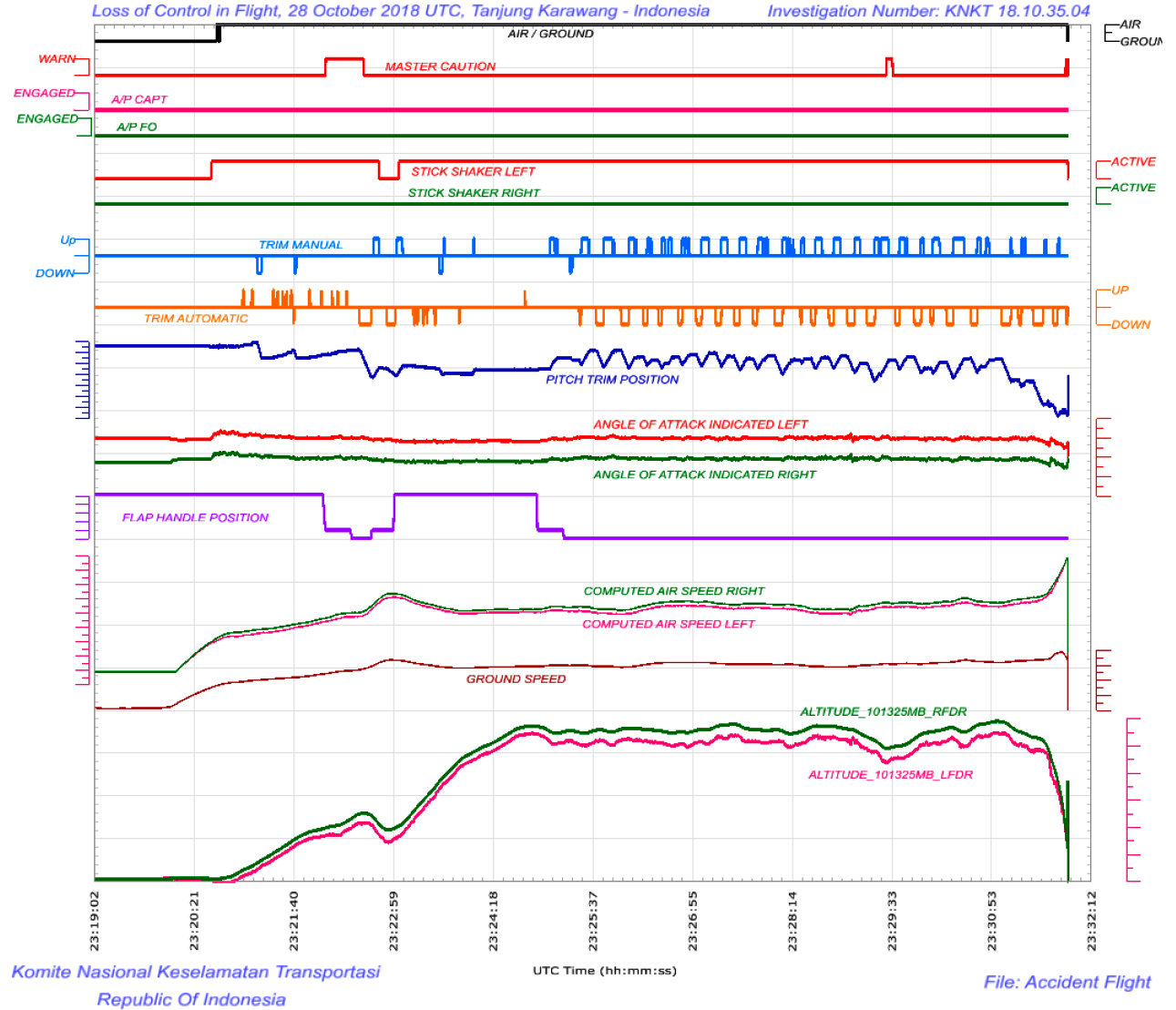 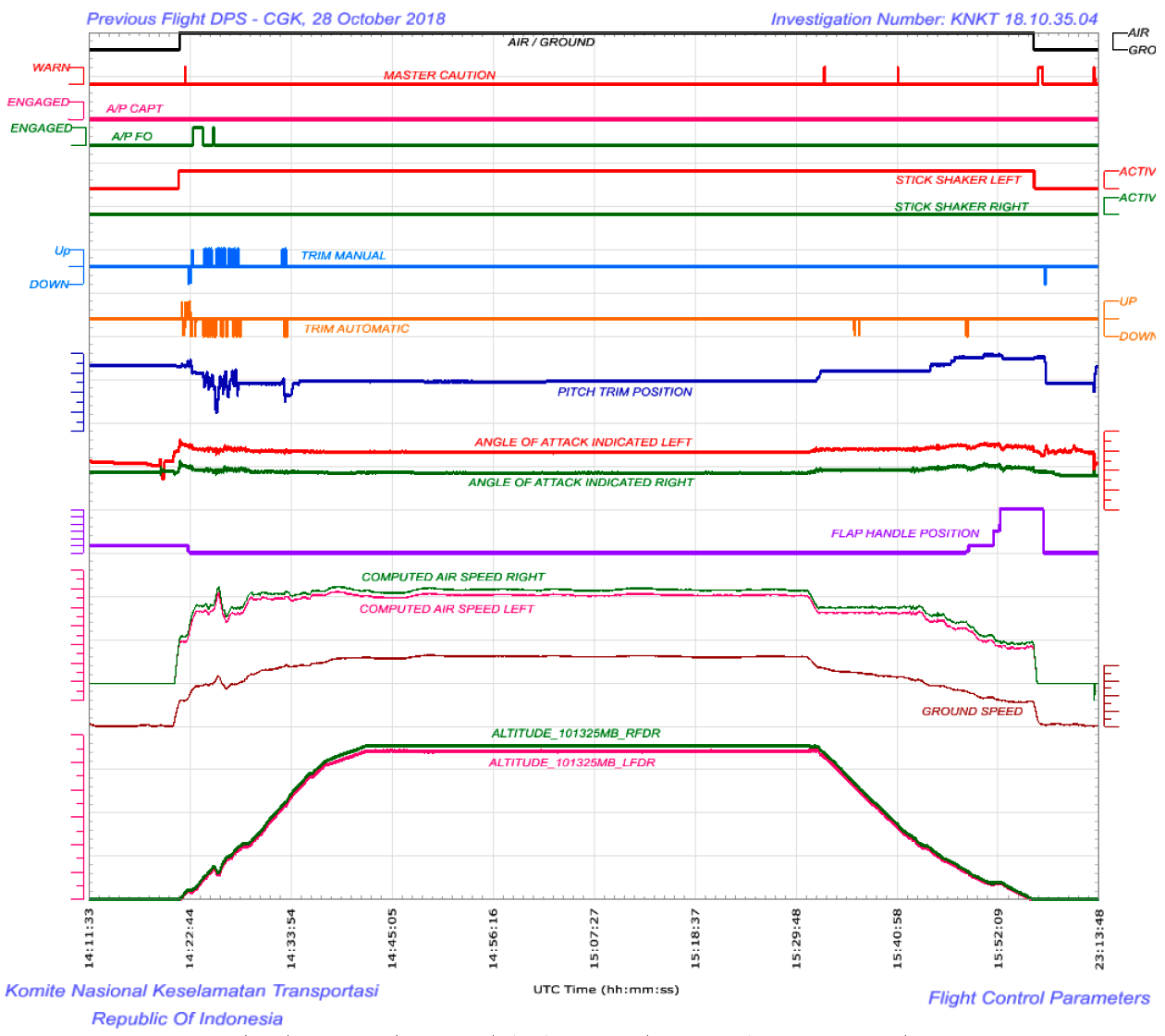 The FDR graphs show the left Angle of Attack (AoA) to track the right sensor but with a 20° higher value for both flights. MCAS (Maneuvering Characteristics Automation System) starts working from around 10° AoA (dependent on pitch rate) and Stall warning with stick shaker starts at around 14° for clean aircraft.

With a pre-bias of 20° for the left AoA vane, stall warning was active from rotation/lift-off for both flights and MCAS was trimming nose down from clean aircraft, countered with Pilot’s manual trim nose up.

Stall warning was on for the complete previous flight and for all of the fatal flight, except for a few seconds in the climb. Stall warning activates the EFS (Elevator Feel Systems) to increase the stick force. The First Officer, who flew the previous flight, complained about the high stick force, saying the control column was too heavy to hold back.

The Captain on the previous flight noted the stick shaker at 400ft and got Speed and Altitude disagree warnings. He concluded by comparing with the third backup Flight data display system his side’s air data was nonreliable and gave control to the First Officer.

With a free mind, he could observe the aircraft besides the warnings and stick force increase. He saw how the aircraft was trimming nose down in the background. He also saw how the First Officer’s trimming stopped the nose down trim. He then tried trim CUTOUT. It stopped the background intermittent nose down trimming. He put the switches back to normal; the intermittent nose down trimming started again. After this, he put the switches in CUTOUT and told the First Officer to trim manually with the trim wheel for the rest of the flight.

The fatal flights’ graphs show the almost exact same behavior of the aircraft, despite maintenance actions and OK tests before the flight. This time the crew was prewarned. Maintenance had been done to fix Airspeed and Altitude disagree and the “STS trimming the wrong way”.

NNC stands for Non-Normal Checklist. He doesn’t mention NNC “Trim Runaway”, which Boeing and FAA now says shall be followed for the symptoms the flight had. Yet, he tries trim CUTOUT and decides it helps and reengages it, but without mentioning it in the maintenance log or Flight crew’s log.

Maintenance acted on the four previous flights problems. Here the flights and their maintenance log and actions copied verbatim from the report:

The summary of the aircraft defect recorded on AFML were as follows: No Reported Date Route Defect Description Resolution Description:

Figure 4. The Maintenance logs and their actions and tests. Source: KNKT report.

The logs, like the previous Captain’s report, focus on Speed and Altitude difference problems. There is only one flight, number three, where the FCC (Flight Control Computer) logs a faulty Stall warning and AoA out of range. With this log, the AoA sensor is changed and tested OK.

Every log entry has resulted in maintenance actions and following tests, according to the 737 MAX AAM (Aircraft Maintenance Manual). The KNKT says the aircraft should not have been considered airworthy by the previous flights Captain but has not commented on the airworthiness of the aircraft after maintenance.

For the previous flight’s airworthiness, KNKT reasons; Stall warning was on from TakeOff. The Captain should have abandoned the flight and returned and landed, just like the fatal flight’s Captain decided to do. He never came that far.

The report gives no information why the fight with MCAS trimming ended in a dive for the fatal flight. The last seconds of the flight are not included in the report’s graphs but the presentation to the Indonesian parliament last week had FDR traces which had more information and until the aircraft hit the sea, Figure 5. 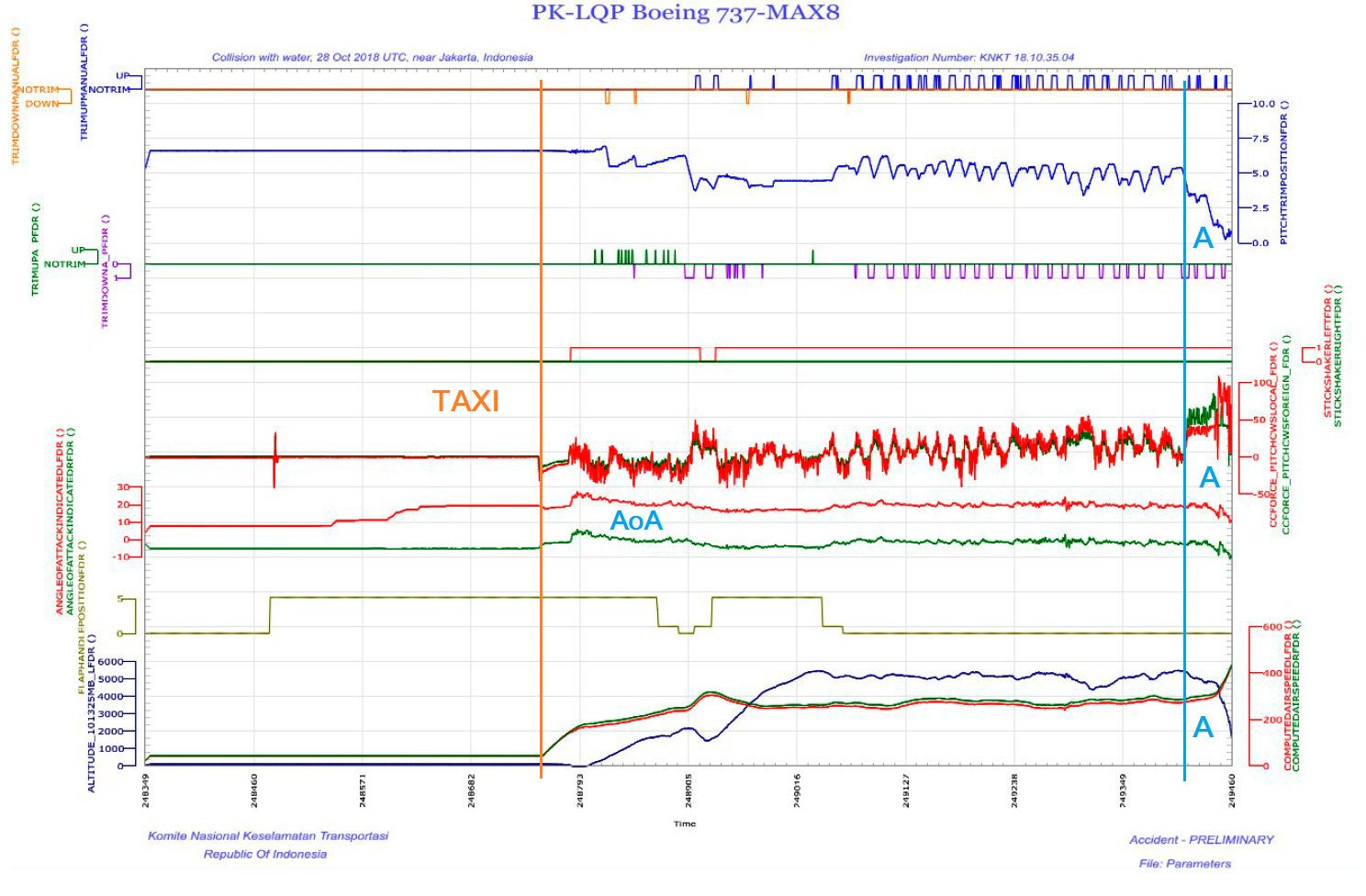 The interesting additional information is the stick force traces named CCFORCE_PITCHCWSLOCAL_FDR and CCFORCE_PITCHCWSFOREIGN_FDR. To understand these, here a short description of the 737 manual pitch control system, Figure 6: 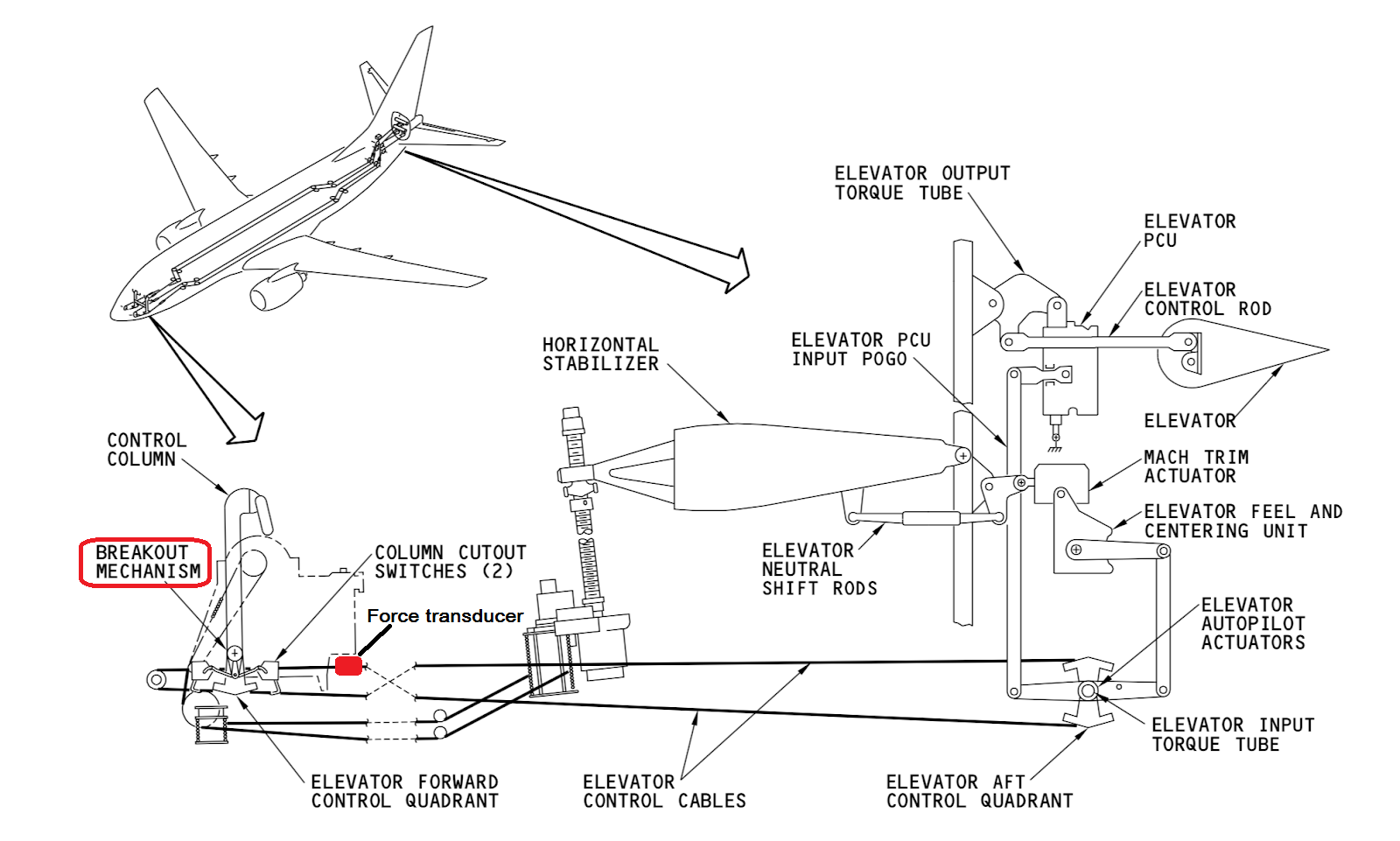 The 737 has two independent mechanical elevator flight controls; the left side which has its own cables to control a hydraulic PCU actuator which controls the left elevator (Red trace CCFORCE_PITCHCWSLOCAL_FDR in Figure 5) and an identical system on the right (Green trace CCFORCE_PITCHCWSFOREIGN_FDR in Figure 5). The systems are joined in the cockpit via a torque tube with a breakout mechanism to get one elevator free, through a very high stick force, in case of an elevator control jam on one side.

The traces come from force transducers located in the cable paths. As the captain pulls the Yoke (Red trace) the First Officer’s force transducer (Green) registers the pull as his Yoke is following the Captain’s movements, but with a little lower force because of the interconnect’s mechanical play. Both paths work against left and right Elevator Feel and Centering (EFS) units.

At Figure 5 (A) the traces are no longer following each other. The First Officer has taken over and his Yoke exerts a higher force to counter MCAS trimming. The Left pitch force remains the same as before. The two sides of the mechanical flight control system give independent force signals. It could mean a Yoke breakout has occurred, but it could also mean something else. A breakout requires an extremely high stick force working against the other side being jammed. Such a Yoke force is not normally encountered when the Yoke has an elevator feel system generating the counter force.

The final report will conclude what is happening here, but I think we have an explanation to the dive in these traces. For some reason, the flight control system experiences a sudden difference of the pitch forces, not appearing at any other stage of the two flights where this trace is available. It could be the Pilots suddenly working against each other on their Yokes or it could be one column being partially jammed for some reason. Difficult to say, we will eventually know. We are missing additional information like pitch and roll angle to access the situation (the investigation has all this information).

Why didn’t the Captain execute the NNC for “Trim runaway”?. Observe how the previous Captain, which had his mind free from not flying a troubling aircraft, did not think this was an important checklist point according to his descriptions and reports. He tried the switches and decided they helped, but he did not identify a trim runaway and reported it. The trim worked when the trim switches were used, this is no classical trim runaway. He consequently didn’t mention “Trim Runaway” in his post-flight reports.

The Captain of LNI610 shall have been briefed on the Speed and Alt disagree and STS trimming the wrong way (it’s really the EFS, not the STS=Speed Trim System which gives the high stick forces) at aircraft handover by the mechanics. His focus was if these problems persisted. They did. He had no reliable speed or altitude information according to several demands for this information by his First Officer to Air Traffic Control.

In addition, he was flying the aircraft, difficult to handle with constant stick shaker and ever higher EFS force (look at the Red force graph increasing all the time). He controlled pitch with counter trim and starts flying the aircraft back to the airport. What happens at (A) in Figure 4 throws both pilots of the guard. This can explain the short counter trims. They had other problems.

The preliminary report if focused on reporting facts and first recommendations. It has no conclusions.

We await more information before going beyond the observations made above. I think it’s safe to say; it wasn’t a clear-cut “execute the Trim Runaway” checklist situation for the crew. All 737 MAX crews now know this is the thing to do in the above situation. But these crews didn’t have this information. Secondly, MCAS operating off a single, unverified, AoA signal will not be for long.