Jan. 18, 2019, ©. Leeham News: We have now covered the basics of pitch stability for an airliner and how a stable or unstable pitch moment curve looks. Now we look at different trouble areas.

Straight and stable pitch moment curves are difficult to achieve at all flight situations. We will discuss some well-known problems, how these were detected and what the solutions were.

Figure 1 shows how a DC-9 candidate tested in the wind tunnel entered two pitch up situations when the Angle of Attack (AoA) went over 18° and then again over 24° (the complete airplane curve with the two areas of a positive angle of the curve). When this happens a deep stall can occur. A deep stall is a stall which cannot be exited with a normal elevator down (stick forward) command.

The problem is common on T-tailed aircraft as the horizontal stabilizer sits high enough to be in the wake of the wings stalled (and by it turbulent) air at stall Angles of Attack (AoA), Figure 2. 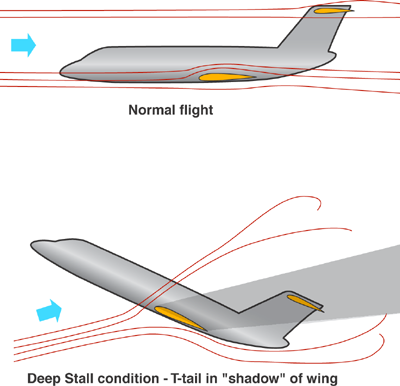 The problem is common for T-tailed aircraft and was discovered when testing the first such aircraft in wind tunnels and later flight tests. The first T-tail airliners were Hawker Siddley Trident and BAC-111.

By the fifth stall test with a BAC-111 with an aft Center of Gravity, the pilots took the aircraft too far into the unstable curve past stall and the aircraft’s elevator no longer had the necessary lift force to get the nose down. It was operating in a too disturbed air coming off the stalled wing. The BAC-111 remained at a stable AoA of over 20° until it hit the ground from 17,000ft.

After the BAC-111 crash, it was decided to spread the findings of the crash to all competing aircraft projects to avoid a repeat of the accident. The solution became a combination of stick shaker warning of the approach to stall and then a stick pusher triggering just before stall AoA is reached. By it, the aircraft never enters a pitch moment region with a positive angle of the curve.

The shaker/pusher combination is since fitted to all airliners and business jet aircraft which has such a deep stall pitch characteristic, mostly T-tailed aircraft. These aircraft shall not fly beyond the AoA of the stick pusher triggering, as recovery is not guaranteed.

Many military aircraft have a worse pitch moment curve than in Figure 1, often without a stick pusher. Examples are the F104 Starfighter (which had a pusher) but also the F16. One of these I flew, the SAAB Draken. We trained to enter deep stall and how to get out by forcing the aircraft even deeper into the stall.

The aircraft then started oscillating in pitch at AoAs of 20° to 50° and by increasing the downgoing oscillation we could swing ourselves out of the stall. The F16 uses the same tactic to exit its deep stall.

The cause of the deep stall for the F104 is the same as for the DC-9/BAC-111 but different for the Draken and F16. These have a highly swept forewings, called the strake for the F16 and the forward delta wing for the double delta Draken. When the main wing stalls, the forewing is still giving lift and the center of lift suddenly moves forward.

This bends the pitch moment curve upwards and the stabilizer/elevator is overpowered (the elevons on the Draken). The F16 subsequently got a larger Horizontal stabilizer making the deep stalls less common. The F16 Fly-By-Wire has a special direct mode to let the pilot swing the aircraft out of a deep stall in the same way the Draken’s classical “Fly-By-Steel-Wire” allows the pilot to use the stick to swing the aircraft out of the stall.

In the next Corner, we will look at further cases of disturbed pitch moment curves for airliners and gradually approach the problem areas of the 737 MAX.