The principal reason, of course, of going to Montreal was to show off the A220 production line and talk about this program. 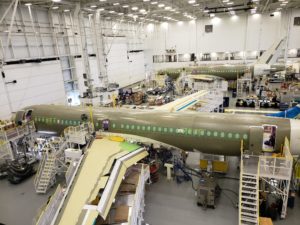 Many of the 50 or so journalists on the trip had been to the facilities when the airplane and buildings were branded C Series and Bombardier. Most had not been there.

But even those of us who had learned something new. As LNA reported last week, I confirmed that performance improvements are planned for the A220 that will further reduce operating costs. In the same post, LNA reported that the C Series/A220 proved to be 3% better than promised.

Something else, which wasn’t included: by shifting the aft lavs around, Airbus can put 2-3 more seats in the airplane, depending on the configuration change. This doesn’t sound like much, but depending on the average fare, load factor and flight segments per day, each seat generates hundreds of thousands of dollars in revenue per year.

This is without reducing the seat pitch.

Airbus reset the ramp-up expectations. Bombardier originally planned to reach rate 10/mo by 2020. Airbus says this will come by 2025. (The Mobile A220 final assembly line will deliver its first A220 in mid-2020. Full production capacity is 4/mo.)

The Mirabel visit also included an overview of the previous Airbus Canada operations and the hopes for the future. This includes selling the Canadian government fighters and tankers and expanding its Canadian-sourcing for these, satellites and other aerospace products.

From Montreal, we flew by chartered Air Canada on an Airbus A319 to Columbus (MS), the production site for the Airbus Helicopter operation in the US.

Airbus has been selling choppers to the US Defense Department, Coast Guard, law enforcement, fire departments and private sectors for 50 years.

The Coast Guard helicopters are a familiar site, even if people didn’t recognize these as coming from Airbus. Used in rescue operations at sea and following natural disasters ashore, the closed tail rotor helicopter is an instantly recognizable aircraft.

One of the biggest success stories is the Lakota.

Airbus sold more than 450 to the US Army. It is used in training. In decades where defense programs are late and over budget, officials say each Lakota has been delivered on time and on budget.

The charter flight from Columbus to Mobile, still Air Canada, was all of 36 minutes in the air. The flight landed at Mobile’s downtown Brookley Field, where Airbus’ plant is located, instead of the regional airport to the west. Brookley is a 10 minute drive to the central business district, compared with 30-40 minutes for the regional airport.

Mobile is opening Brookley to commercial service this year and shifting all from the regional airport within 4-5 years.

The groundbreaking was really ceremonial, with state, local, company officials and representatives from Delta, Jet Blue and Moxy airlines turning dirt with the classic silver shovels. The footprint for the final assembly line building had already been cleared by heavy earthmoving equipment.

Bombardier’s CEO, Alain Bellemare, was in the audience. LNA posted this report.

I’m in Dublin this week at the Airfinance Journal conference. Among my activities: interview one-on-one John Leahy, retired chief operating officer-customers, for Airbus, at the AFJ conference.

I’ll be reporting throughout the week from Dublin.