How Mitsubishi Aircraft morphed the MRJ70 into the M100 SpaceJet

June 13, 2019, © Leeham News.: Mitsubishi Aircraft Corp (MITAC) has done more than a rebranding and new livery in creating the SpaceJet out of the MRJ70.

It’s changing the design, its materials and several parts of the interior to accommodate more passengers than the MRJ70.

Here is a technical analysis of the aircraft, based on information released today and our own Aircraft Performance Model.

We describe the changes MITAC made to the MRJ70 to end up with the M100 SpaceJet and what these mean for passengers and operators.

The problem with space

Mitsubishi focused on space efficiency when transforming the MRJ70 to the M100. The all-important US Scope Clause market requires premium seating space for the passengers but doesn’t allow enough gross weight to achieve it with the new generation, heavier engine. The MRJ90 (and the Embraer E175-E2) were designed in anticipation that the Scope Clause would be relaxed. The two airplanes are too heavy under the Scope Clauses.

The MRJ70 carried fewer passengers in its design than needed: 69 vs 76 in the typical US configuration, a major economic disadvantage.

With the MRJ90 not Scope-compliant (it works outside the US), MITAC turned to improving the MRJ70. This morphed into the M100 SpaceJet.

There are several restrictions for this market depending on which mainline carrier the feeder service is performed for. The most prevailing are:

These two restrictions create a weight dilemma for the aircraft OEMs. The outsourced feeder services for the mainline shall ideally have the same cabin classes and comfort as the mainlines’ single-aisle domestic operations.

As these cabins have evolved into three classes with Domestic First Class, Premium Economy and Economy, the required cabin size for the Scope aircraft has increased.

For the Bombardier CRJ900, the length of the cabin is no problem, but the width is. Its cross-section makes for a hunkered down boarding experience and cramped seating. The latest ATMOSPHERE cabin design helps but it can’t change physics.

The Embraer E-Jet has a wide enough cross-section to offer a good boarding and seating experience and its cabin length for the Scope-compliant E175 is adequate but not more. Embraer, therefore, increased the length of the E175-E2 to give airlines more freedom with the cabin layout.

This ran the E175-E2 into a weight problem. The longer aircraft with the new heavier Pratt & Whitney 56 inch GTF engines is too heavy for the 86,000lb limit. With passengers loaded, it only allows fuel for 950nm sectors, too short for the operators. There are, therefore, no firm orders for the type from US carriers.

The MRJ70 was light enough to have an adequate range when operating under the 86,000lb Scope limit, even with the new Pratt & Whitney 56-inch GTF engines. And it had the same cross-section as the E175, so boarding and seating comfort were fine. But its cabin was too short. In a three-class layout, the seating went south of 70 seats.

How did Mitsubishi solve the space and weight problem? Here our analysis, based on the released information. 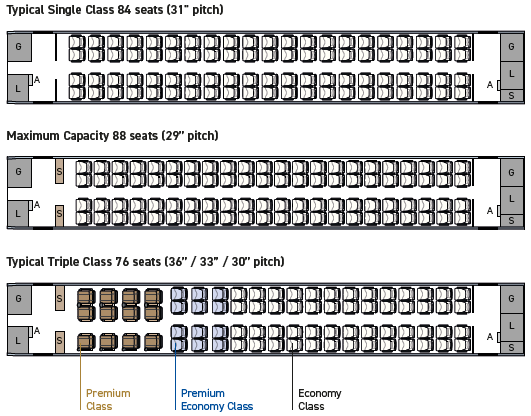 This gives the same cabin the length as the E175 but with a more flexible front end. The E175 has a front galley service door which is placed forward of the galley. This puts the galley with its hard wall between the entrance area and the cabin. Head injury concerns then put the first seat row away from this wall.

The M100 cabin has the service door aft of the galley and it allows airlines the flexibility to plan the front of the cabin as they prefer. One can place seats close to the entrance and service doors for maximum capacity or place closets there for passenger coats, all depending on cabin layout preference.

The other optimized area is the use of the aircraft’s cross section. Figure 3 shows the E175 cross-section compared with the M100 cross-section.

Figure 3. The E175-E2 cabin cross-section on the left and the M100 cabin on the right. Source: Leeham Co and Embraer/MITAC. Click to see details.

Figure 3 is a hybrid, as we have combined the E175 cross-section with the wheels first bins from the E175-E2. The in-market E175 has “wheels to the side” bins which are shallower, as was the MRJ70. This restricts the carry-on luggage for the E175, essentially offering every second passenger space for carry-on bags.

The new wheels first bins for the M100 offers every passenger carry-on bag bin space. So it wins over the E1 hands down. But this would be to easy a comparison.

Embraer could upgrade the E175 cabin to the E175-E2 standard while waiting for Scope release. So we decided to compare the M100 to such a configuration to find any differences.

Ignore the difference in seating depiction style in Figure 3. The E175 is from a drawing in Embraer’s Airport planning guide; the M100 is from the SpaceJet brochure. The key is the measurements and the perceived space around the shoulder/head area for the depicted 6ft 2in passenger.

The important difference is the form of the bins. The E2 bins are fixed. They must, therefore, be canted down a bit to allow the ingress and egress of the bags. 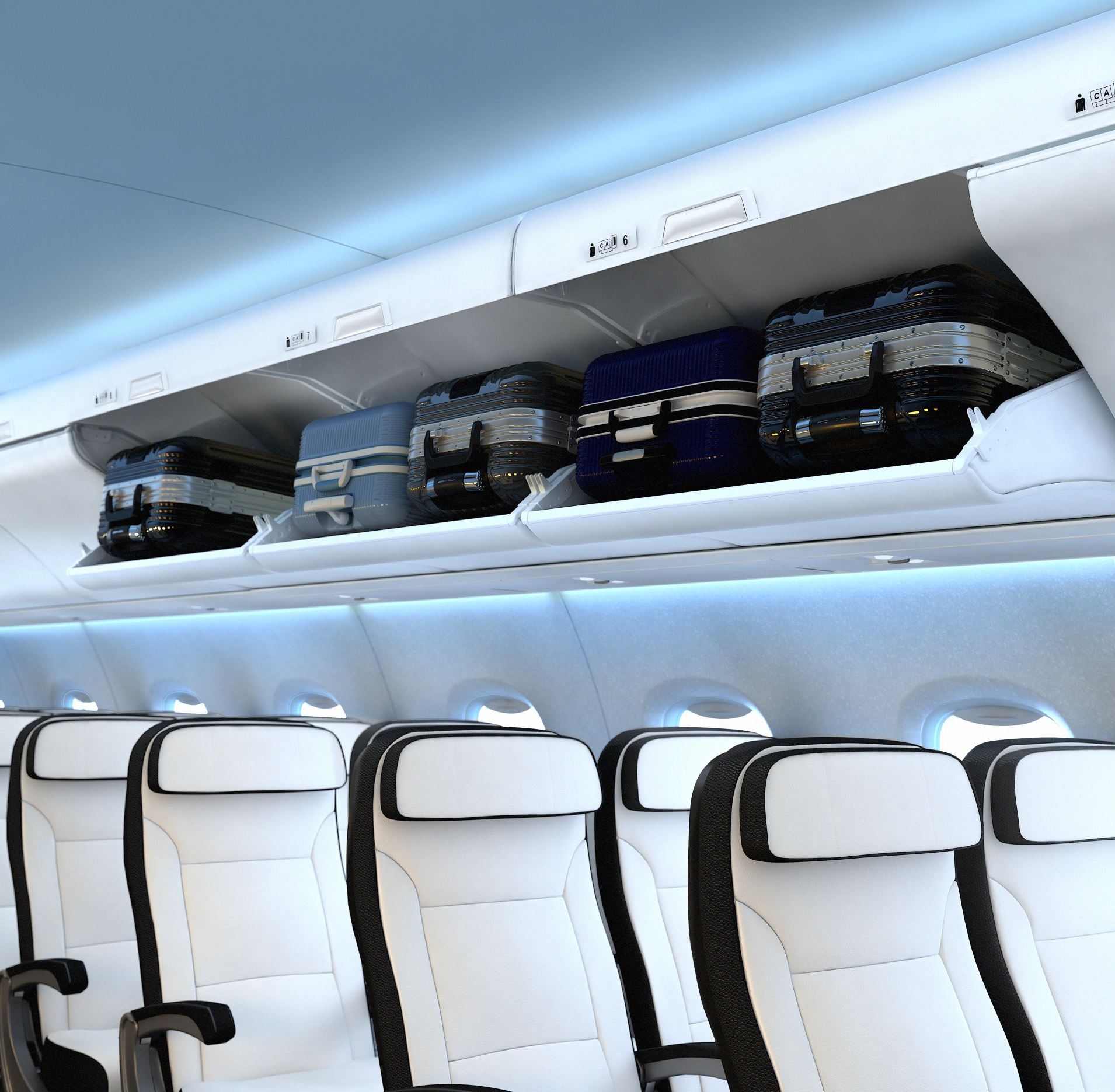 The SpaceJet team went for pivot bins. It allows the bags to snug up against the cabin wall when shut. This gives a climbing bin profile when shut like the Boeing Sky Interior. The wheels first pivot bins and the profile of the shut bins are visible in Figure 4.

There will be a cabin mockup at the Paris Air Show next week and we will check out the feeling the new bins create. If they create the feeling of space the Boeing Sky Interior gives, the SpaceJet team has succeeded.  We prefer the Sky Interior to all other single-aisle interiors.

The M100 has repositioned the rear galley/lavatory rearwards, increasing the space for the cabin and decreasing a baggage compartment which was sized for a time when passengers checked their luggage.

With the new bins, the 480sqft baggage compartment, down from 640sqft, will be mostly empty. This gives an opportunity for cargo, as the loading door is large and the compartment has a workable height.

The rear lavatory is now placed more centrally, making it less cramped and easing ingress and egress for wheelchair passengers.

So how can Mitsubishi get a three-class cabin into a Scope-compliant aircraft with Pratt & Whitney GTF engines when Embraer can’t?

The width gives range if you are not Take Off Weight (TOW) limited. With Scope, you are. Low empty weight is then more important than wingspan as span drives wing bending moment which drives weight.

If you don’t have a large enough empty weight to MTOW margin, you can’t fill the tanks when the passengers are on board. The E175-E2 can only fill 4t of fuel when its Scope cabin is full. This gives an operational range of 950nm, too short for the operators.

To get a low empty weight, Mitsubishi uses Aluminum-Lithium alloys and Carbon Fiber Reinforced Polymers (CFRP) for more parts than on the MRJ90. This is combined with smaller winglets to cut the wing bending moment to save further weight.

For an international market, the MTOW is free. Here the M100 42t MTOW gives a 1910nm range with a single class 84 seat cabin filled with passengers.

The MRJ90 was too large and the 70 too small for the largest part of the market, the operators in the US flying under Scope Clause restrictions.

The M100 SpaceJet is a major makeover of the MRJ70. The target has been an aircraft which can fly 76 passengers in mainline three class comfort on the US feeder routes while using the latest engine technology.

Has Mitsubishi succeeded and is it OK to call the result a SpaceJet?

On paper, it looks good. The range is there as is the space for the passengers.

Is there enough space for a SpaceJet moniker? The E-Jet cabin is the most comfortable cabin in the market for an economy passenger. You are either at an aisle or window and you have plenty of space. The A220 has 18.5-inch seats with the middle seat on the three seat side at 19 inches. But 60% of the seats are three abreast and the bins are less “Sky Interior” than the SpaceJet’s.

The M100 takes the cabin experience one step further than both of those, so we give the SpaceJet name a pass.

← Evolving the MRJ into the SpaceJet
Bjorn’s Corner: Why hybrid cars work and hybrid airliners have challenges →