September 30, 2022, ©. Leeham News: Last week, we discussed how the pilot should control the eVTOLs that enter the market in three to five years. The absence of a standard for pilot interaction with the VTOL is troubling.

Having gone through the market’s major eVTOLs, their flight principles, and the key systems, we now look at how it all fits together. What payloads can be flown to what range? What will be the operational costs, and how green will it all be? We start by looking at some design realities for eVTOLs. 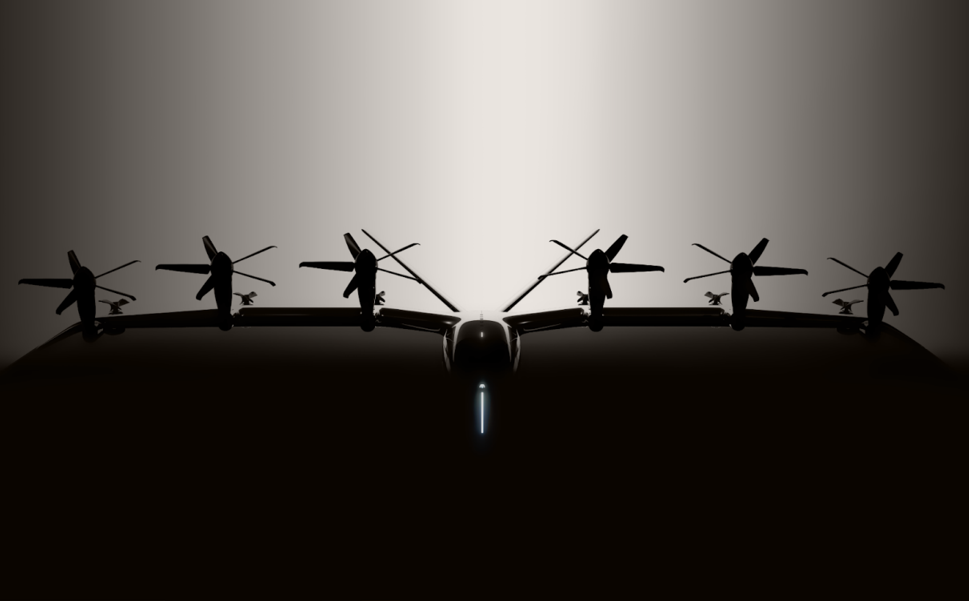 As for the battery electric aircraft discussed before, design realities affect eVTOLs, like all aircraft designed around the Part23/CS23/SC-VTOL rules. Rather than pinpointing a specific design, we discuss these realities around a generic design, representing the class of eVTOL we have looked at.

We start with the biggest problem for any aircraft designer, the reality of mass. Underestimation of the mass of a new aircraft design is a chronic disease among aircraft design teams, and there seems to be no cure. There isn’t a project where the initial mass estimation has been correct or too high.

Experienced aircraft design teams miss the initial mass projections by about 5% once the aircraft is finished and certified, and inexperienced teams by up to 20%.

It’s not too difficult to understand what masses we would have for our generic eVTOL. We assume it’s a Pilot + four-passenger model that uses vectored thrust for half its lift engines to fly a winged forward flight. Such designs likely end up at the SC-VTOL maximum allowed mass of 3175kg. From this, we can deduce the probable Operational Empty Weight, OEW (which includes the pilot).

We have hundreds of aircraft that passed Part 23/CS23 certification, so there is an abundance of experience in what these rules mean in mass fraction OEW to Maximum TakeOff Weight, MTOW.

Fabio Russo, head of development at Tecnam, has decades of experience with such designs, including the electric Tecnam P-Volt. He made the Figure 2 graph for a paper about the Alice electric aircraft. You find it here.

The typical mass fractions for the different parts of a Part 23 aircraft are given in Figure 3. 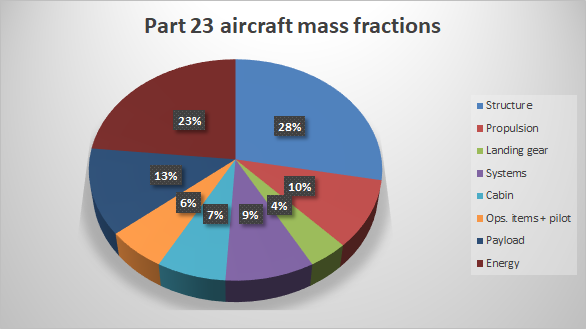 If we apply these fractions to our 3175kg aircraft, we get the table in Figure 4.

Now to the differences:

The structure of an eVTOL is more complex than the aircraft as we have eight lift forces that enter the structure sitting on booms. The eVTOL OEM will argue he is using composites versus aluminum for the Part 23 aircraft. This will reduce the mass of the eVTOL structure.

The problem is composites are no game changer for structural mass. A CFRP (Carbon Fiber Reinforced Polymer) part is strong in tension, where up to a 20% mass gain can be made IF TENSION is the design problem for the part! In compression (by definition, the other half of the wing/fuselage/horizontal tail), CFRP is not good as then the matrix resists the buckling rather than the fiber.

And large parts of an aircraft/ VTOL are damage tolerance limited from the impact of rain, hail, and ramp rash. Here CFRP is at a disadvantage compared with aluminum as it’s brittle. It means a lot of parts will have their CFRP dimension, and thus mass, decided by toughness criteria rather than tensile strength.

The bottom line: There are no significant mass gains to make in the structure of the eVTOL with CFRP. The form and surfaces of the eVTOL can be shaped more optimally, but the structural mass will not be much different than for a Part 23 aircraft made with aluminum.

A complication for the eVTOL is the storage of the batteries. The energy in the Part 23 aircraft is fuel stored in the wingboxes on each side. It’s an ideal placement and almost for free as the fuel mass is where the lift attacks the structure, and the wingboxes’ strength is decided by aerodynamic forces. There is no structural penalty for the energy storage. You only pay with sealant, pipes, valves, and pumps to get the energy to the thermal engine.

The battery modules, at a total of 745kg, are heavy items that must be stored crashworthy. These can be stored in the wings, which structurally would be best, but this complicates several aspects of thermal runaway protection and battery service/management.

The bottom line of the mass analysis is that our likely OEW is at least 64% of the MTOW of 3175kg. To this, we add 400kg of passengers, and best case, 745kg of batteries. What this means for the energy content and range we look at next week.