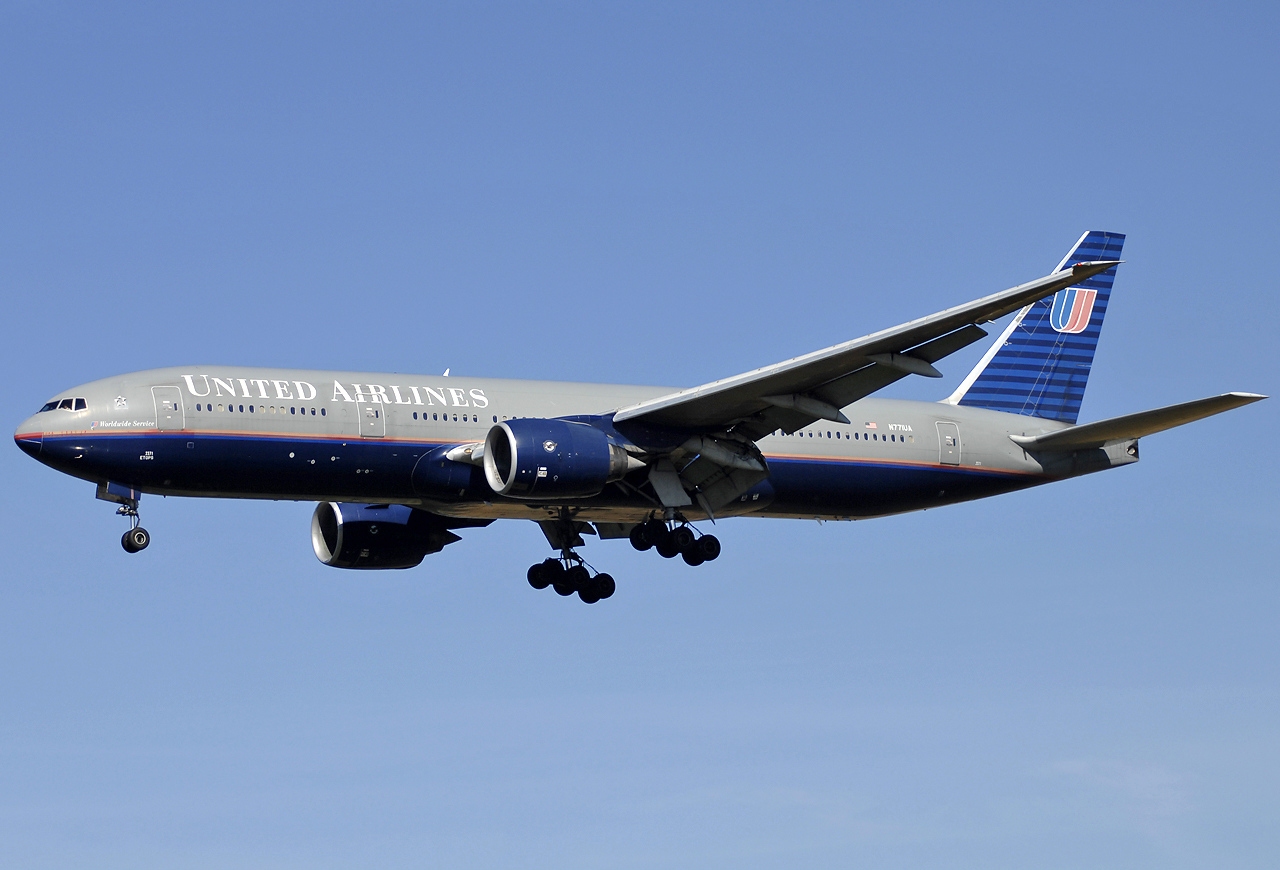 The High Bypass Turbofans mature in Technology and Reliability

With the introduction of the new high bypass turbofans in the thrust class 40,000lbf, the reliability of the jet engine made regulators and airlines want a least three engines for long overwater flights.

Such caution was motivated; neither of the engines introduced for the new widebodies, the JT9D-7 for the 747, the CF6-6 for the DC-10, and the RB211-20 for the Tristar L-1011, were free from troubles. It was new technology with different problems affecting the engines.

The design of the engines with a big fan giving a bypass ratio of around 5:1 and a powerful core with a pressure ratio of about 25:1 gave the engine OEMs plenty of space to improve all aspects of the engines.

Instead of new engines being developed for new aircraft programs, the existing engines were further developed to cover thrust needs from 35,000lbf to 60,000lbf. The increase of thrust by 50%, up from the original 40,000lbf, was achieved by improved technology for several parts of the engines.

After the rapid changes in engine designs from the 1950s to 1970s, where the commercial engine went from piston props to turboprops, straight jets, and bypass turbofans, the 30 years from 1970 to 2000 saw few architectural changes in the engines. A “typical” design standard developed. 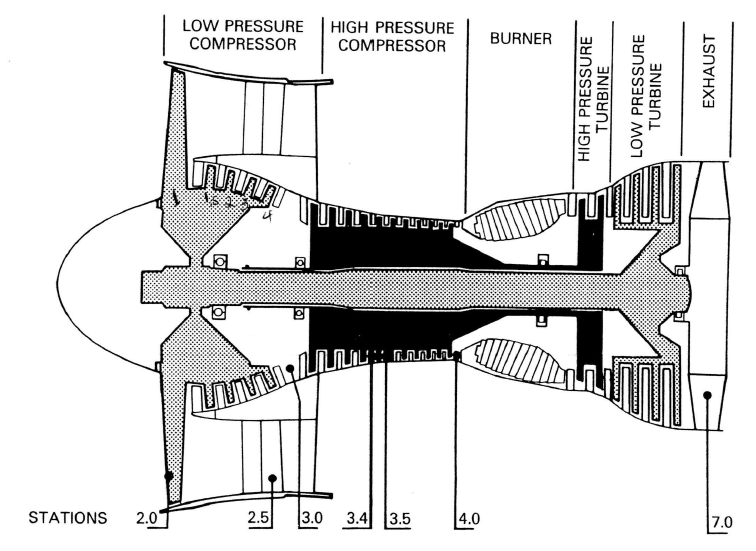 But it could also show the variant developed for the Boeing 777 25 years later as the PW4074, a 74,500lbf engine that used the same architecture, now with detailed improvements in areas like fan and compressor efficiencies, higher burner temperatures feeding more durable turbines, etc.

With minor changes such as the number of booster stages (the core compressor stages sitting on the same drum and shaft as the fan) or compressor/turbine stages, it could also represent the GE CF6 engine. Even the narrowbody engines we described last week, the CFM56 and V2500, used this architecture of a single fan, followed by three of four booster stages, a 10 to 12-stage high-pressure compressor, burner, one or two-stage high-pressure turbine, and three or four stage low-pressure turbine.

There was only one exception, the Rolls-Royce three-spool RB211s, later called Trents. Rolls-Royce had issue with the booster in a two-shaft engine rotating at the same low speed as the fan. A fan/compressor blade generates more pressure gain the faster it moves relative to the airflow through the engine. So a blade shall either sit on a fast rotating shaft or a large diameter compressor drum to be effective.

By separating the fan from the much lower radius compressor stages, each compression part of the engine could run at its optimal RPM (Figure 3) and deliver maximum performance.

The result was an engine where each compression stage delivered more compression, making for a shorter engine. The RB211s/Trents are known for their low rate of in-service degradation, which is a result of a shorter and, therefore, stiffer engine.

The architectural fuel consumption advantage of the tri-shaft was, in practice, overshadowed by continuous improvements on each section of turbofans. In the following, we use graphs from a Rolls-Royce presentation to give examples of such improvements. All three OEMs made similar steps in technology; we just use the Rolls-Royce graphics for convenience.

The areas of improvement

Figure 4 shows the principal areas of jet engine improvement over the years. It’s specific for Rolls-Royce engines but is valid for all OEMs.

The Propulsive efficiency improvement is the lowering of the Overspeed of the air leaving the engine combined with an increase in mass flow we have discussed before. The mechanism to achieve the lower Overspeed is the increase in Bypass Ratio, BPR.

Figure 4. Areas of TSFC improvement over the years. Source; Rolls-Royce.

The increase in BPR is dependent on how large fans the engines can have without running into trouble with blade instability and high mass for the fan and the containment casing, the fan case. This resulted in a compromise BPR of around five for all engines from 1970 until the mid-1990s.

The long narrow blades could run into a mechanical/aerodynamic instability called flutter, which would destroy the blade. It, therefore, had mid-span clappers that increased the rigidity of the blade. This disturbed the airflow and, by it, efficiency.

As fan blades have no tip flow (tip flow sealed by the fan casing, different from wings, which must be wide and narrow to avoid excessive tip flow losses), the blades could be made wider and, therefore, mechanically stiffer,  which increases the flow efficiency of the fan.

CFRP is very strong in tension, which is the dominant problem for fan blades, but it’s brittle (as Rolls-Royce learned with the RB211-20 Hyfil CFRP fan). By adding a titanium leading edge together with optimized CFRP layup, the GE90 bird ingestion problem could be mastered, Figure 6.

In a later development for the 115klbf GE-90-115B, the CFRP blades were aggressively swept to increase the aerodynamic efficiency of the part supersonic (outer part) and part subsonic flow (inner part) of the fan blades.

The cycle efficiency increase in Figure 4 came from burning the fuel at a higher pressure and temperature, closer to the ideal stoichiometric limit of jet fuel. This was achieved more by component efficiency increases than by changes in architecture. The architectures from 1970 to well past 2000 remained the same, with minor changes such as one compressor stage more or less dependent on engine cycle and history.

The improvements for the fans were not only by them generating higher bypass ratios. Their capability to generate a suitable Overspeed to more bypass air with a given power taken from the low-pressure turbine improved as well (the power transfer efficiency).

The engine pressure ratios were increased by higher compressor stage gains when the complex 3D aerodynamics of the stator vanes and compressor blades could be simulated with CFD (Computer Fluid Dynamics).

The higher burner temperatures were made possible by improvements in materials and cooling of the combustor nozzle and first turbine stages. Part came through advanced cooling concepts (Figure 7), part through new materials and coatings.

The turbine materials had been different Nickel based alloys for a long time, but by changing the crystal structure of the material (Figure 8), the stress tolerance could be increased, enabling higher turbine temperatures.

With a higher pressure ratio and temperature, the energy of the air from the combustor improved. The core could drive a larger fan through the low-pressure turbine, Figure 9.

The core efficiency increased from around 35% for the early high bypass engine to 50% for the engines in the late 1990s. 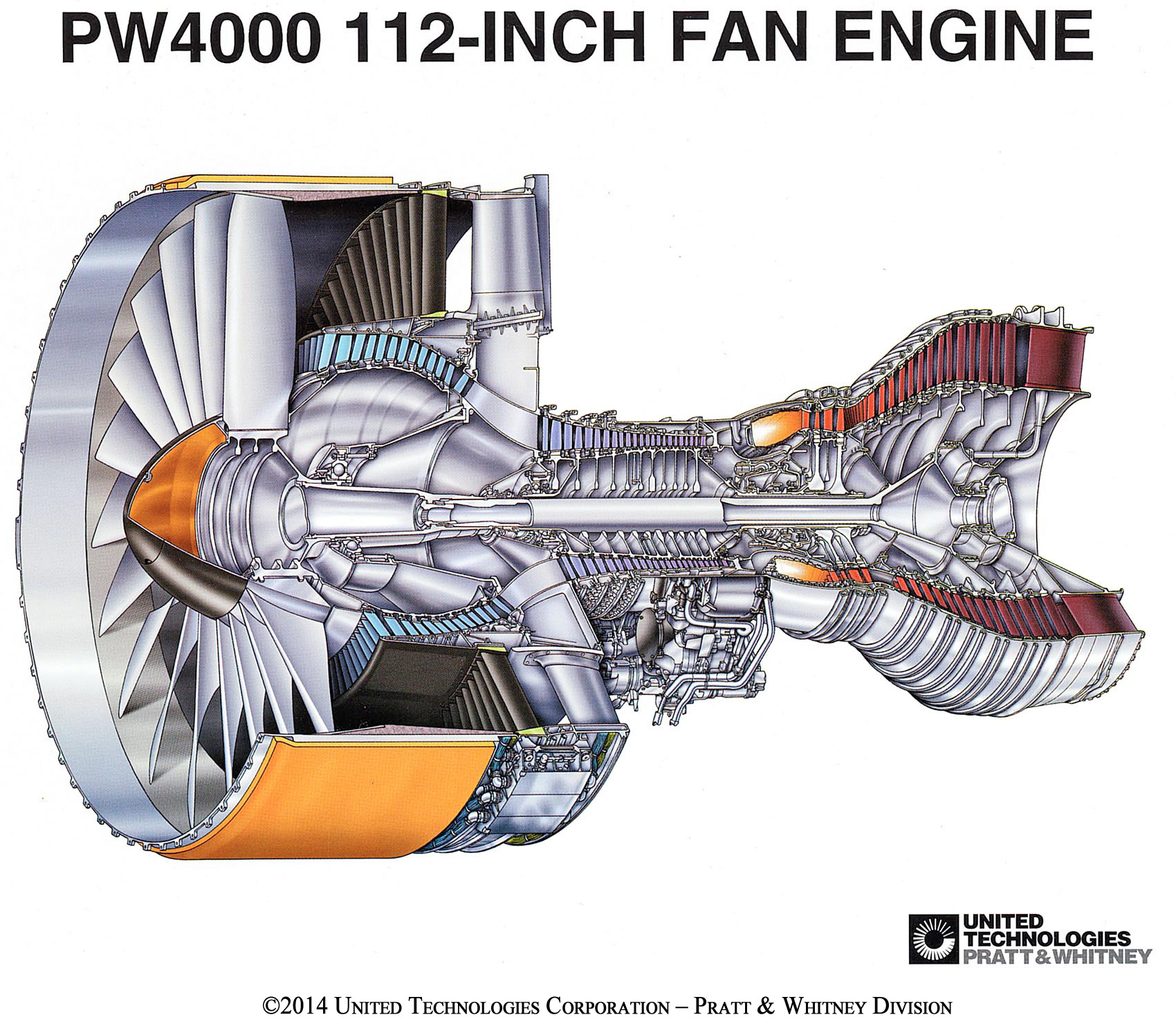 The aircraft programs and their engines

From the 1970s to the year 2000, the aircraft OEMs introduced seven new aircraft programs that were served by the engines developed for the 747, DC-10, and L-1011. Two new engines were added where the originals were either on the large side (Pratt & Whitney with its JT9D for the 747) or on the small side (GE with its CF6 for the DC-10), but these followed the architecture of the previous engines.

The JT9D designs from Pratt & Whitney were made for larger aircraft and could not be successfully downsized to the 757. Pratt & Whitney developed a smaller engine with the latest technology to capture the 757 market, that potentially could dominate future domestic routes. The JT10D, later PW2037, was born. It had a pressure ratio of 30:1 and BPR of 5.8. But the new design wasn’t as reliable as Rolls-Royce’s RB211-535. It didn’t capture the major market share, even though it consumed about 10% less fuel than the RB211. When the engine matured, Rolls-Royce had taken the lion’s share of the market, at the same time as sales of the 757 dwindled.

When Boeing designed the 747, Douglas the DC-10, and Lockheed the L-1011, more than two engines were needed to get clearance to fly long routes over water. The increased reliability of the engines in the described period changes this.

By 1990 a twin-engined aircraft could get the necessary ETOPS clearances to fly far from possible airports. The 777, with its two engines, came to dominate long-haul from the end of the 1990s at the expense of Airbus’ long-range A340, which was designed with four engines (“as this was the engine number required for safe long-haul flight”).

Two engines have been the norm for long-range aircraft since (with the exception of the Airbus A380, which due to sheer size, needed four engines).