BAM opened just at the start of the COVID-19 pandemic in March 2020. But ceremonies were postponed until now.

Additive manufacturing (AM) is not new to Boeing. It’s been doing AM in various forms for 30 years. But increasingly, companies are turning to AM to reduce costs and production time. Also known as 3D printing, companies are using AM for tooling, parts, and small components from civil and commercial aviation to defense and space programs. Parts are used on airplanes, drones, and spacecraft.

Many homes and non-aerospace businesses have 3D printers. Some are for business and others are for hobbyists. As part of a media and VIP tour last week, guests received gifts of two small airplanes created by 3D printing, one metal, and one plastic (plus a box of two chocolates, not made by AM, but the real thing). 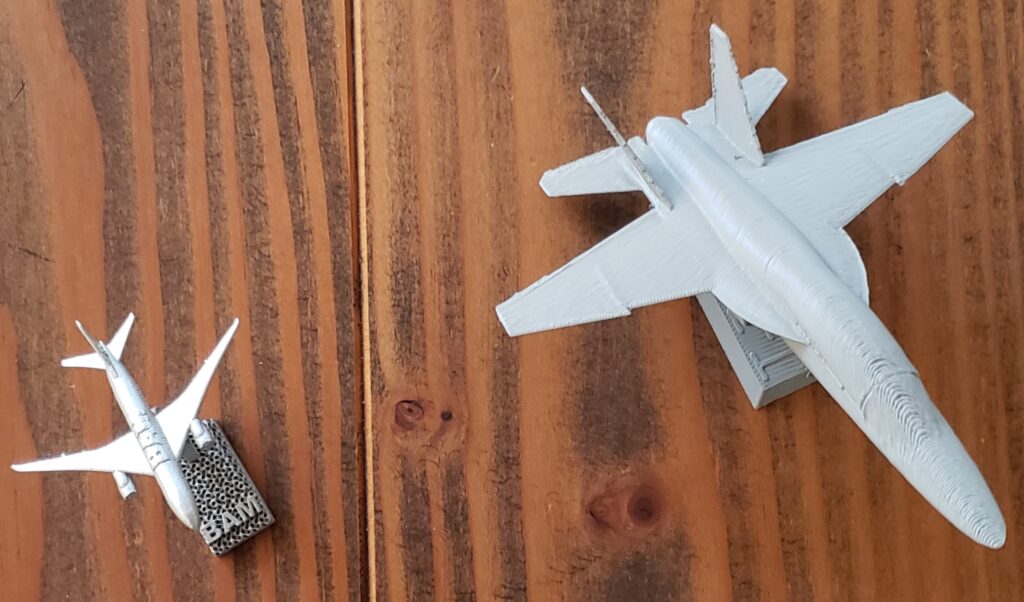 Shifting from traditional production methods is important for manufacturers and their supply chains, regardless of the industry. Melissa Orme, vice president of Additive Manufacturing for Boeing, declined to provide a general guideline about cost savings using AM. But a display board later in the tour, illustrating winglet production for the 737, gave a clue. 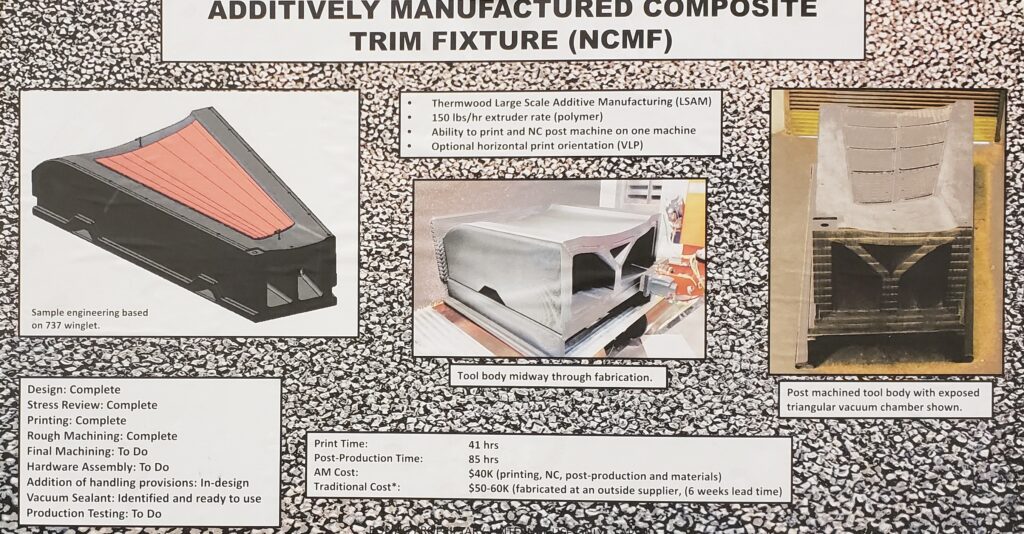 The time required to fabricate winglet components at an outside supplier meant a six-week lead time. Printing the part in-house requires 41 hours and postproduction time another 85 hours, or slightly more than half the time. The “traditional” manufacturing cost was $50,000 to $60,000. AM cost is about $40,000, a reduction of 25%-50%.

Orme said cost reduction depends on the application. But she added that a key benefit is the elimination of parts. “I like to say, how many parts are we eliminating? The value is we don’t have just a difference in cost. Look at it holistically. If we are able to eliminate 30,000 fasteners and other parts, and all the costs that go with that, that’s a huge saving.”

Although Boeing has been doing AM for 30 years, so much of it is new that regulatory approval is required along the way. Given the overhang of the MAX grounding and poor relations with the Federal Aviation Administration coming out of this crisis, the question arises: how smoothly is FAA approval going for AM?

Orme said that with any new technology, data must be accumulated and analyzed. “We don’t have that luxury of seven decades of data like castings. The challenge is really amassing the data which provides that level of comfort. We have a lot of testing. We have a good relationship with the FAA and other regulators that we work with.”

Boeing’s 30 years of AM production started with tooling, followed by polymer (plastics). Certification of the latter is a different process than the former, Orme said. Using AM for metals is another certification process. Parts require still another modality and certification process. Use of powders is new, requiring still more process and review.

Throughout Boeing’s oft-delayed path to a new airplane, variously known as the Middle of the Market aircraft (MOM) or the New Midmarket Airplane (NMA), advanced production was a key component of developing the Next Boeing Airplane (NBA). Is the BAM a key component for the NBA? Orme punted the question to corporate communications.

“It’s a technology that the company has invested in as a priority,” spokesman Gary Wicks said. “This is evident about how the company feels about this technology and how it helps us drive forward.”

The scale at the BAM is small, in the context of a manufacturing revolution, for the NBA, whatever it is. Boeing wants to diversify from costly, time-consuming autoclaves (something then BCA CEO Scott Carson said even in the early days of the 787 production). But cutting weight, parts, production time and cost wherever possible clearly is important to the business plan for the NBA.

Boeing is using AM parts for doors on 777s, internal parts on the spacecraft Starliner and winglets on 737s, among other things. 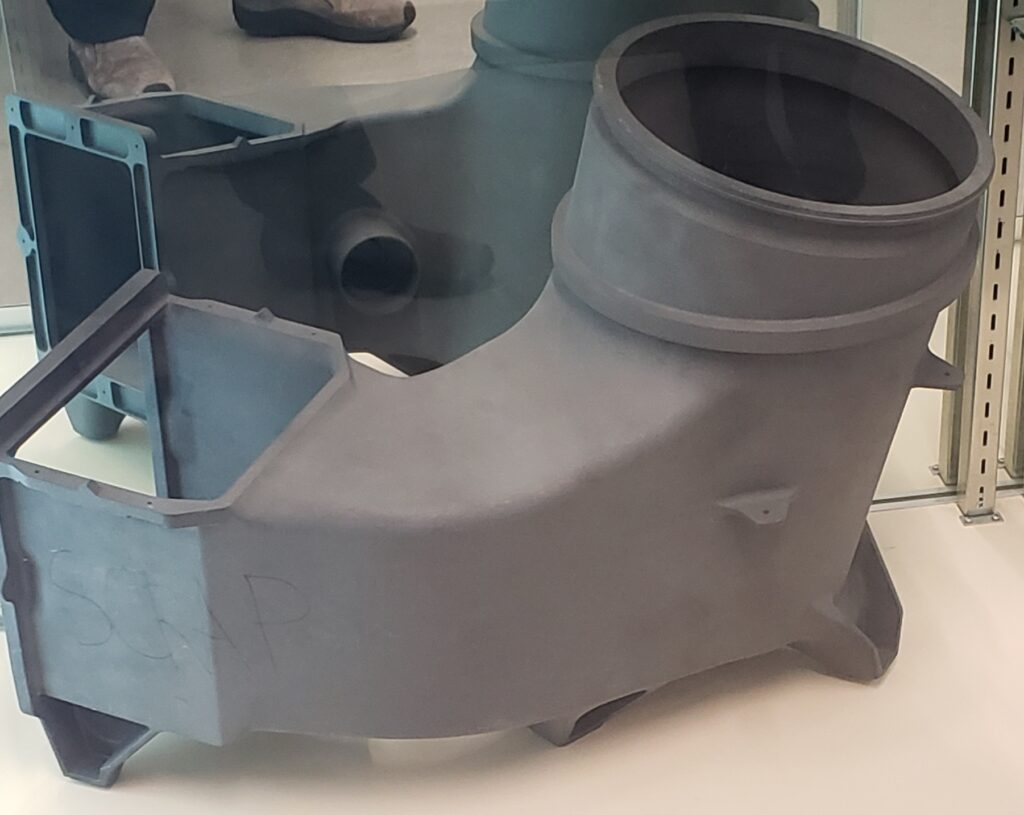 This duct is for the Starliner space capsule. It once was made in metal but now is made with polymer (plastic), cutting weeks off the production time. It’s much lighter, always a consideration for space travel. Photo: Leeham News.

The BAM is also making a big section for the WISK Advanced Air Mobility vehicle in which Boeing has invested $450m. When finished, the 12-foot section is part of the passenger compartment. 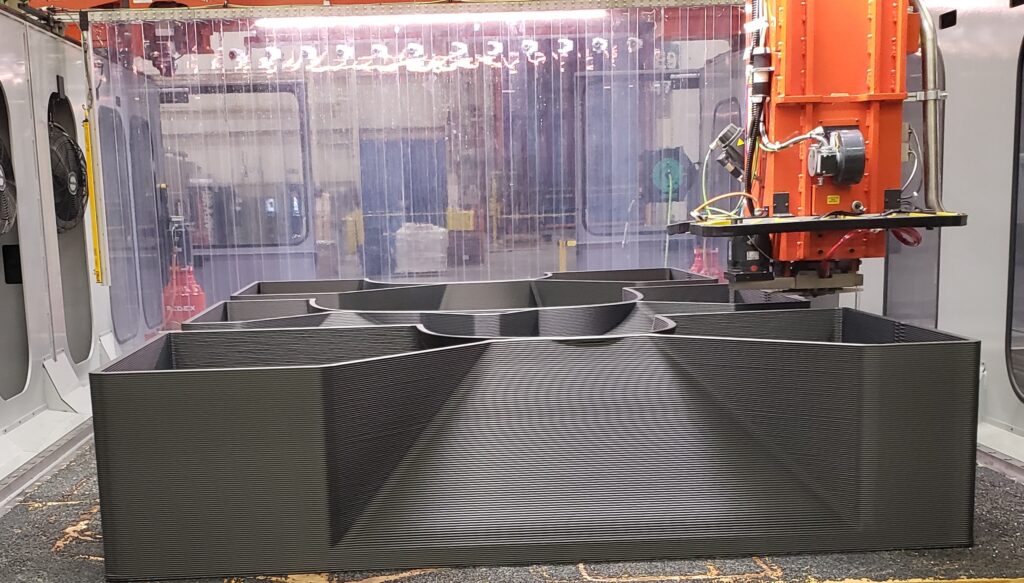 This component is being made for the WISK Advance Air Mobility vehicle prototype, a program in which Boeing has a $450m investment. The component is a prototype tool printed in three sections designed to hold a molded part similar to the Wisk passenger compartment during trimming and processing in the factory.  Photo: Leeham News.

All this experience and investment will benefit the NBA. The question remains, just how much of the NBA will rely on AM.