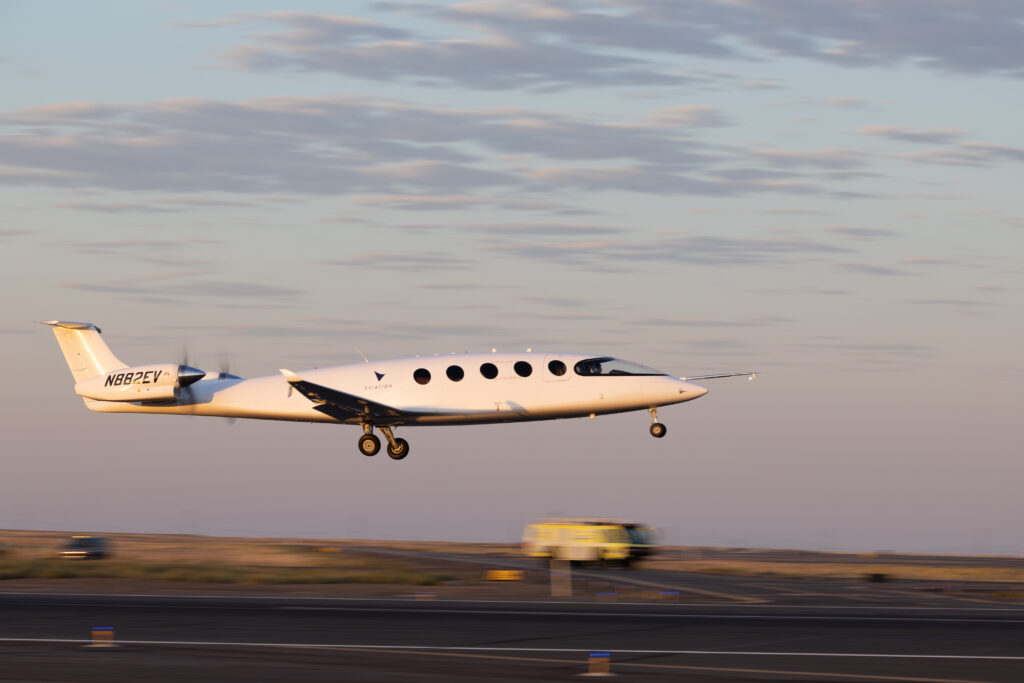 Sept. 27, 2022 © Leeham News: The battery-powered Eviation Alice has flown for the first time.

The nine-seat aircraft, powered by twin electric propeller motors assembled by Eviation’s sister company, magniX, rotated up and took off into a sky hazy from forest fires shortly after sunrise in the Pacific Time Zone, a little after 7 a.m.

After takeoff the plane banked to the right, circled for eight minutes around Grant County International Airport in Moses Lake, then landed safely. The Alice reached an altitude of 3,500 feet.

The dawn flight was an important milestone for Eviation, magniX, and for battery-powered aircraft in general. The Alice appears to be the largest electric passenger aircraft to fly so far, larger than the two-seater Pipistrel Velis, which had its first test flight with passengers in Iceland last month. Tecnam and Rolls Royce teamed up to fly a four-seater P2010 with a hybrid electric engine in February.

In a statement released just after takeoff, Eviation said the flight is the dawn of a “new era of more sustainable, scalable and affordable transportation.”

Some 30% of passenger flights cover less than 250 nautical miles, the company said. These flights emit far more carbon on a per-passenger-mile basis than long-haul flights, and the Alice will be a “catalyst for making these flights environmentally sustainable.”

The Alice also is 20% to 30% quieter than conventionally powered aircraft, which will make it possible for use at more regional airports with current noise restrictions.

The Alice is being sold with commuter, cargo and VIP versions, Eviation said. In a press release following the flight, the company noted that it has agreements with two passenger carriers — Cape Air and Global Crossings — for a total of 125 of the commuter models, and an agreement with DHL Express for 12 of the cargo version.

Eviation and magniX still face significant challenges to getting the Alice into service, particularly when it comes to the batteries that will power the electric motors, Eviation CEO Gregory Davis said in a post-flight press conference.

“The biggest technical challenge that Eviation has to overcome is the development of batteries,” he said. “We really do need the industry to boost the energy density.”

Because of that, Davis said he doesn’t expect that Alice will win regulatory approval until 2025, and won’t be carrying paying passengers until 2027.

In addition, the companies would greatly benefit from a battery manufacturer taking the lead to develop batteries specifically for aviation applications, he said. To this point, magniX and Eviation have adapted existing batteries to meet their needs.

Davis said he’s optimistic that battery improvements are coming, mentioning 3D-printed solid state batteries as one potential future option. “There are some fairly promising chemistries out there,” he said, along with “block changes in the way that batteries will be built, which will help us.”

Increasing demand for high-capacity batteries in many industries will help Eviation and magniX, he said. “The indications are that the market is driving that technology.”

Getting the aircraft certified is another challenge, Davis acknowledged.

Right now, there isn’t “unity,” he said, between the FAA and EASA in terms of battery certification standards.

The plane that flew this morning was Eviation’s “proof of concept” aircraft, Davis said. With a five-year gap before the expected entry into service, and with technologies developing rapidly, “we absolutely will make evolutions to the aircraft,” he said.

The first plane will be one of three that Eviation anticipates using for certification program, he said, adding he anticipates they will need 1,500 to 2,500 hours of flight time before getting regulatory approval.

The Alice is the clean-sheet electric aircraft from Eviation. Harbour Air, a seaplane carrier based in Vancouver, Canada, has been testing a six-passenger de Havilland Beaver retrofitted with an electric motor built by magniX. Last month, it completed its first point-to-point flight, a 45-mile hop between Vancouver and Victoria.

Today’s first flight for the Alice flight came after a series of false starts. Eviation and magniX debuted the Alice at the Paris Air Show in 2019. Then it was conceived as a tri-motor, a concept that was scrapped as magniX developed more-powerful electric motors. The original V-tail also gave way to a more conventional T tail.

Last year, the companies  announced their intent to fly the Alice for before the end of 2021. In January, the companies said the first flight was only “weeks away.” But a series of personnel changes at the top then occurred, including the departures of Roei Ganzarski, who was both CEO of magniX and chairman of Eviation, and the firing of Omer Bar-Yohay, Eviation’s CEO.

Both Eviation and magniX are owned by Singapore-based Clermont Group.