Putting perspective on the 787

Update: The Wall Street Journal has a long article (subscription required) discussing the problem and the possibility the FAA could release the 787s for service if it approves interim steps designed by Boeing. It also has this illustration: 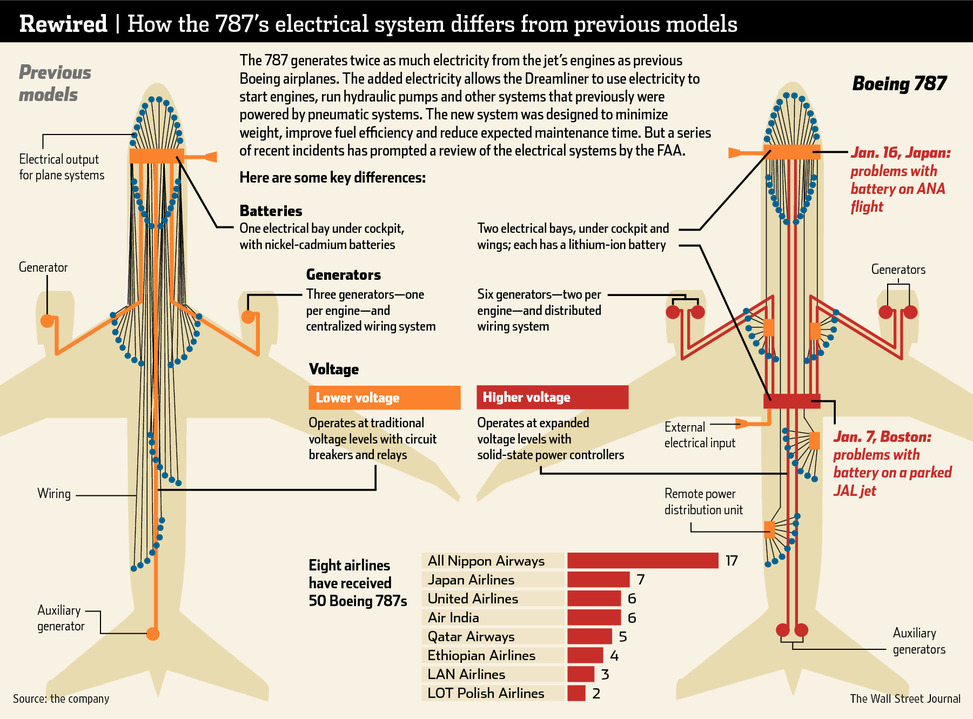 The grounding of the Boeing 787 by the US Federal Aviation Administration wasn’t entirely unexpected, based on discussions we had in the last 48 hours with people in the US and in Europe.

Although the FAA did not pull the Airworthiness Certificate of the airplane, the grounding had virtually the same effect.

Airlines throughout the world followed suit and some of the regulatory agencies followed the FAA lead.

We’ve been inundated with media calls asking about the ramifications. Here’s a synopsis of the questions and our responses.

Is this bad for Boeing?

On its face, this might seem like a somewhat silly question,  but understand that the FAA hasn’t grounded a commercial airliner since the 1979 crash of a McDonnell Douglas DC-10 that killed all on board and some on the ground. Most reporters weren’t around then and don’t have context.

Of course this is bad for Boeing. Fortunately, there has been no loss or life or even a hull loss, so the damage to Boeing and the 787 brands will be limited. But this is a black eye for both, no question about it.

How bad is it for Boeing?

This falls into that cliche, “it depends.” It depends on what the National Transportation Safety Board ultimately finds caused the JAL 787 fire and the ANA battery incident. Then it depends on what it takes to fix it. Will a simple battery redesign suffice? Was a defective design even at fault, or was there some system-defect, or human error, or something else? Why didn’t the safe guards prevent these things from happening?

Why did a brand-new airplane (the JA 787) have a fire and a year old airplane (ANA) have a different kind of battery issue, in a different electronics bay?

It’s way too soon to tell how bad this is for Boeing.

How long will it take to fix it?

You have to find out what’s wrong first, and then determine what it takes to fix it. The battery supplier says it could take months to analyze the failures, according to this Bloomberg article.  The fix might take several more months.

The in-flight fire on a 787 test flight delayed the program by six months.

How much will this cost Boeing?

Not that the company will ever tell the public, it all depends on how long the airplanes are grounded, what the problem is and how long it will take to fix the problem. The aircraft are under warranty, and expect more delivery delays. But the levels of compensation have too many variables right now to make any kind of a guess about the cost.

Is the plane safe?

Boeing says it is. The FAA said it is during the press conference announcing a full program review. But grounding an airplane says it isn’t. All the glitches aside from the fire are nuisance teething problems. The fire is a Big Deal and the battery incident may or may not be related to some systemic issue. With the grounding, the FAA is saying there is a safety issue until it is identified and fixed. The FAA statement is succinct:

“Before further flight, operators of U.S.-registered, Boeing 787 aircraft must demonstrate to the Federal Aviation Administration (FAA) that the batteries are safe.

“The FAA will work with the manufacturer and carriers to develop a corrective action plan to allow the U.S. 787 fleet to resume operations as quickly and safely as possible.”

“We are confident the 787 is safe and we stand behind its overall integrity.  We will be taking every necessary step in the coming days to assure our customers and the traveling public of the 787’s safety and to return the airplanes to service.”

Until the root cause of the battery issues is determined and a fix identified, a safety issue hangs over the airplane, the program and Boeing.

32 Comments on “Putting perspective on the 787”