A Boeing Classic airliner and the good ol’ days of flying

We’re taking a break from the near-saturation coverage of the Boeing 787 that began when we stepped off our airplane in Amsterdam Jan. 16 (GMT) to find the ANA incident lighting up our BlackBerry. 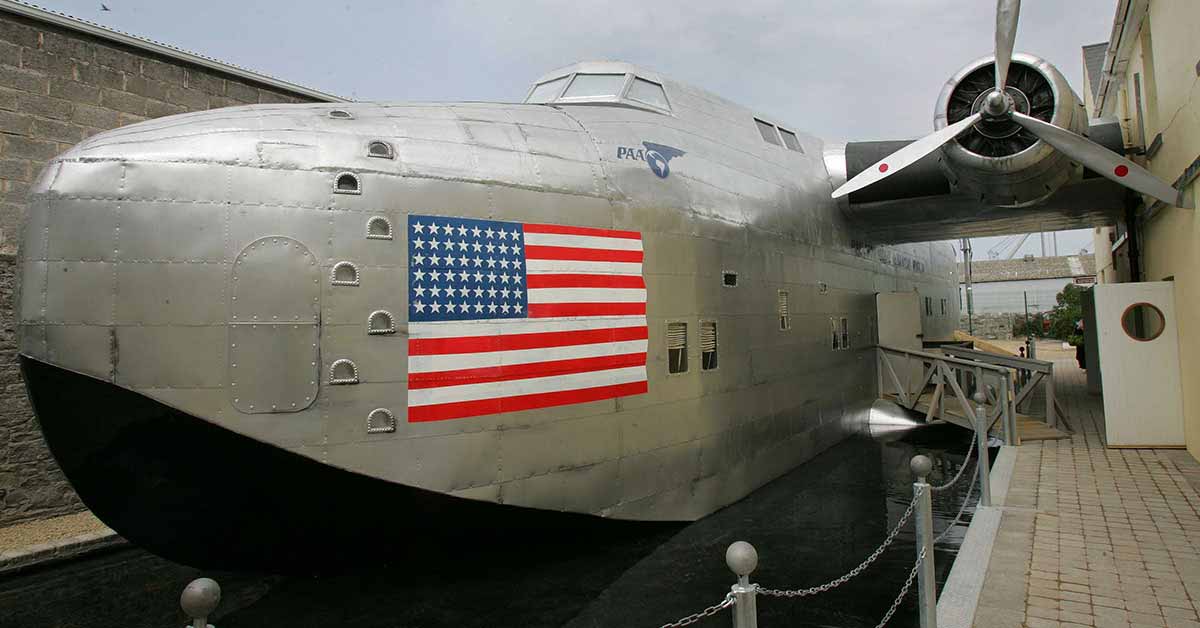 Boeing 314 replica at the Foynes museum.

We’re going to talk about another Boeing airliner, a classic airplane of which there were only 12 built and whose useful life was cut short by a World War: the 314, the famed Pan Am Flying Boat Clipper.

As Classic as the 314 Clipper became in aviation history, Boeing’s website is remarkably brief about it. Wikipedia isn’t much more effusive. But the airliner nonetheless evokes fascination. All 12 314s were destroyed or scrapped, yet there have been a couple of attempts to find a couple of the destroyed models–sunk in the Atlantic or Pacific–to recover and restore them. Here’s one such effort announced in 2005. This newsletter contains a wealth of history.

In addition to the usual histories and enthusiast books written about the 314, fiction writer Ken Follett penned one largely set on a westbound trans-Atlantic flight on the Clipper. Follett weaves fact with fiction and this war-time mystery is no different. While we found the book somewhat slow-reading, the descriptions of the challenges facing ocean flying in a slow, pre-war aircraft certainly give you plenty of understanding of what flying was like then.

But we weren’t satisfied with Follett’s description. And we knew how and where we could be. And when we went to Dublin on our recent trip, we make special plans to drive across lower Ireland to Foynes, three hours to the west, the port of entry and exit for Pan Am’s trans-Atlantic flying boat service. Here is the Foynes Flying Boat Museum, where there is a full size replica of the 314 fuselage, triple-tail plane and part of a wing. 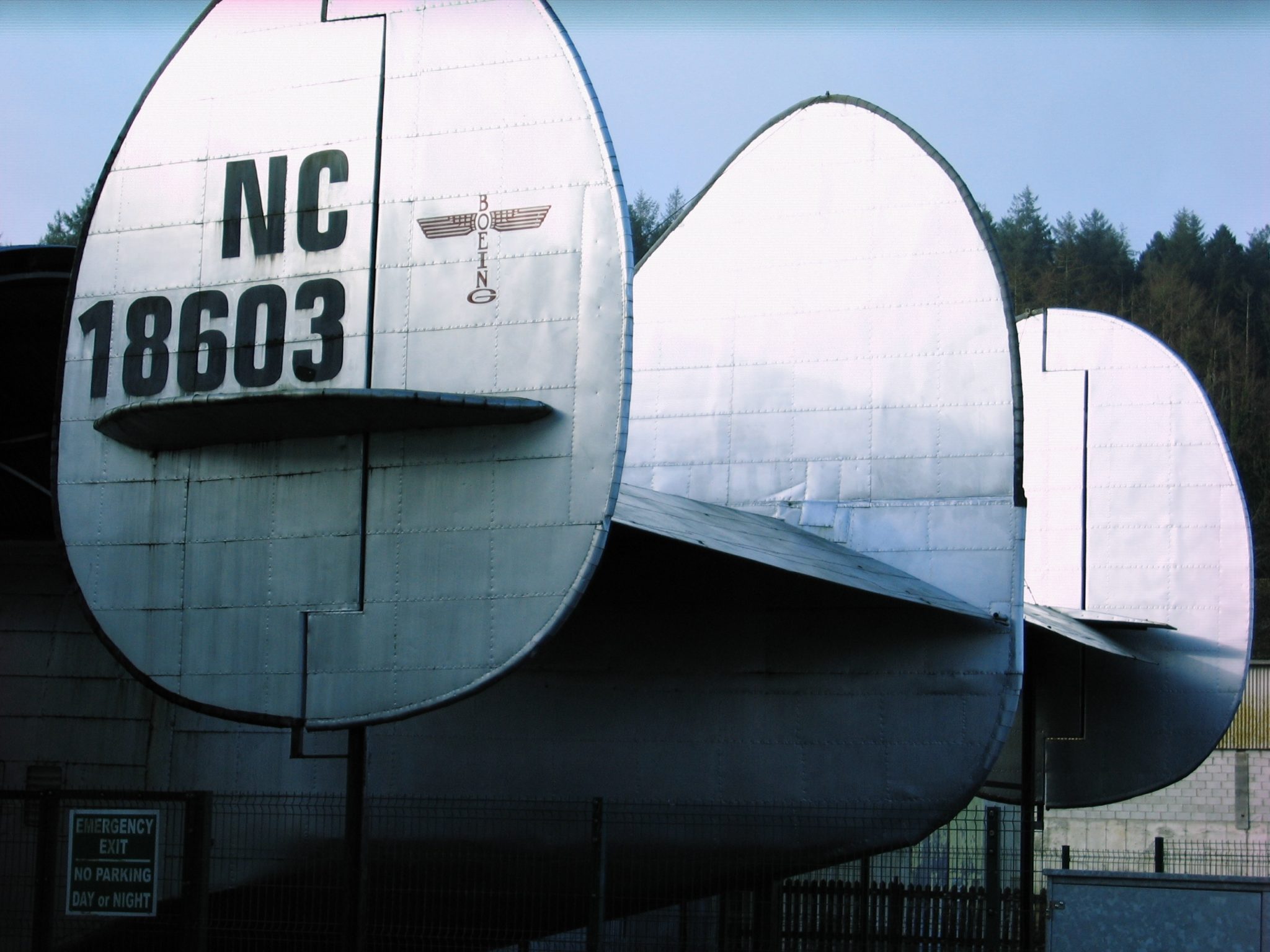 The Museum is located across the street from the docks where boats embarked and disembarked passengers from the Clippers, which would moor in the estuary at Foynes and downstream from Shannon. 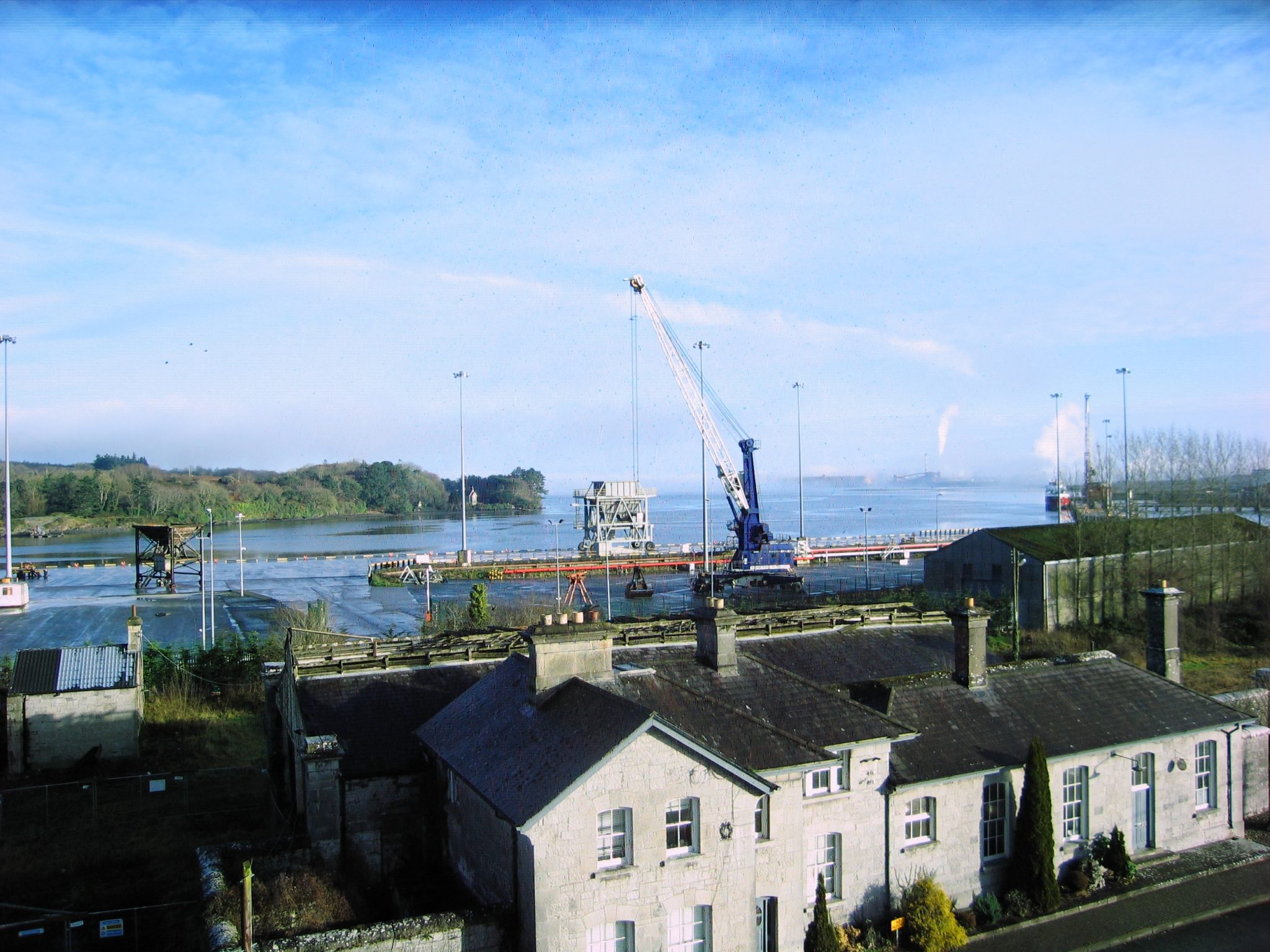 Looking from the control tower at Foynes over the estuary where the flying boats landed. They would moor to the right and passengers would be shuttled to the dock. Shannon, Ireland, is to the far upper right out of view.

The building contained the waiting room and control tower for the operations, now converted to a restaurant, museum and related facilities. Oddly, the roof over the ballroom is of the same design as that over the Denver International Airport.

It’s opened only seasonally, but the operators were kind enough to open it for us, providing a one-on-one guided tour. We also saw the archives, with tens of thousands of documents; a 15 minute movie in which the last flight out of Foynes as a commercial seaplane base was an American Export Airlines Sikorsky of the type restored and on display at the museum at Hartford-Windsor Locks (CT); murals, models and more.

The Museum also has a hologram, the first time we have seen one outside of Star Trek: The Next Generation–and, of course, that was only on TV and in the movies. This hologram is a short skit of a couple who have completed a Clipper flight entering a bar and ordering Irish coffee. While not related directly to the airplane itself, the technology of the hologram is pretty darn impressive.

In 2001, the Museum obtained a commitment from Boeing for a donation of US$150,000. Before this was fulfilled, 9/11 happened and Boeing withdrew the commitment. Despite entrees since, Boeing has not provided any monetary assistance. But to recreate the Clipper, access was previously provided to Boeing blueprints and plans.

Here’s a sort of blow-by-blow of the tour:

The Museum: On display are murals, photos of seaplanes, photos of operations at Foynes, the movie and some models. One mural superimposes the profile of the B314 against the 747, to scale, showing that the length of the 314 goes from the nose of the 747 to mid-fuselage. 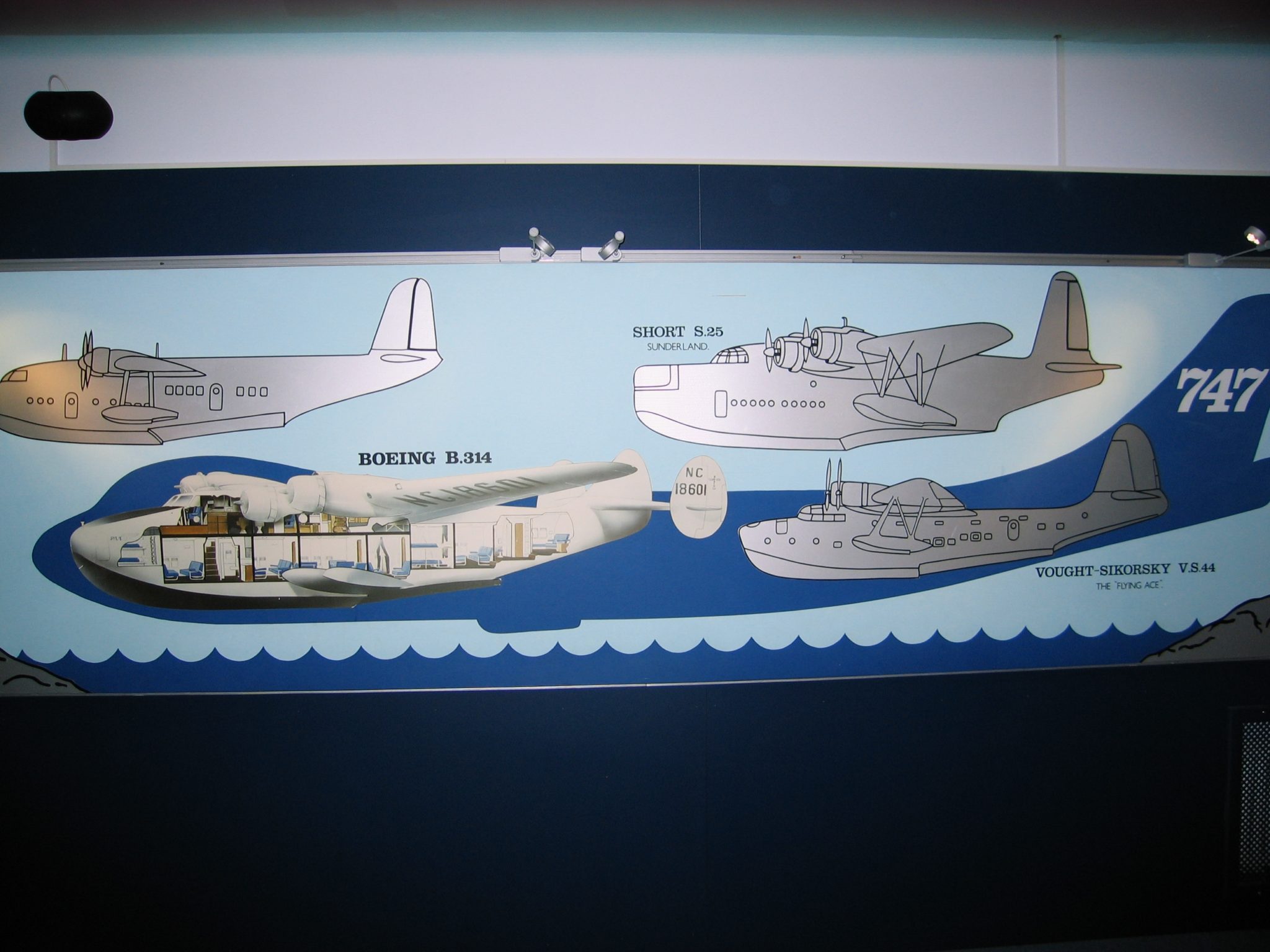 One item that cracked us up is the 1939 description of the use of alcohol by Pan Am personnel:

The Airplane Main Cabin: As soon as you walk in, you are stuck by how much room there was back in the day of pre-war flying. Since an Atlantic cross would take at least 25 hours, the view then was big seats that converted to berths. The room provided today, especially in coach, is water-boarding torture compared with then. 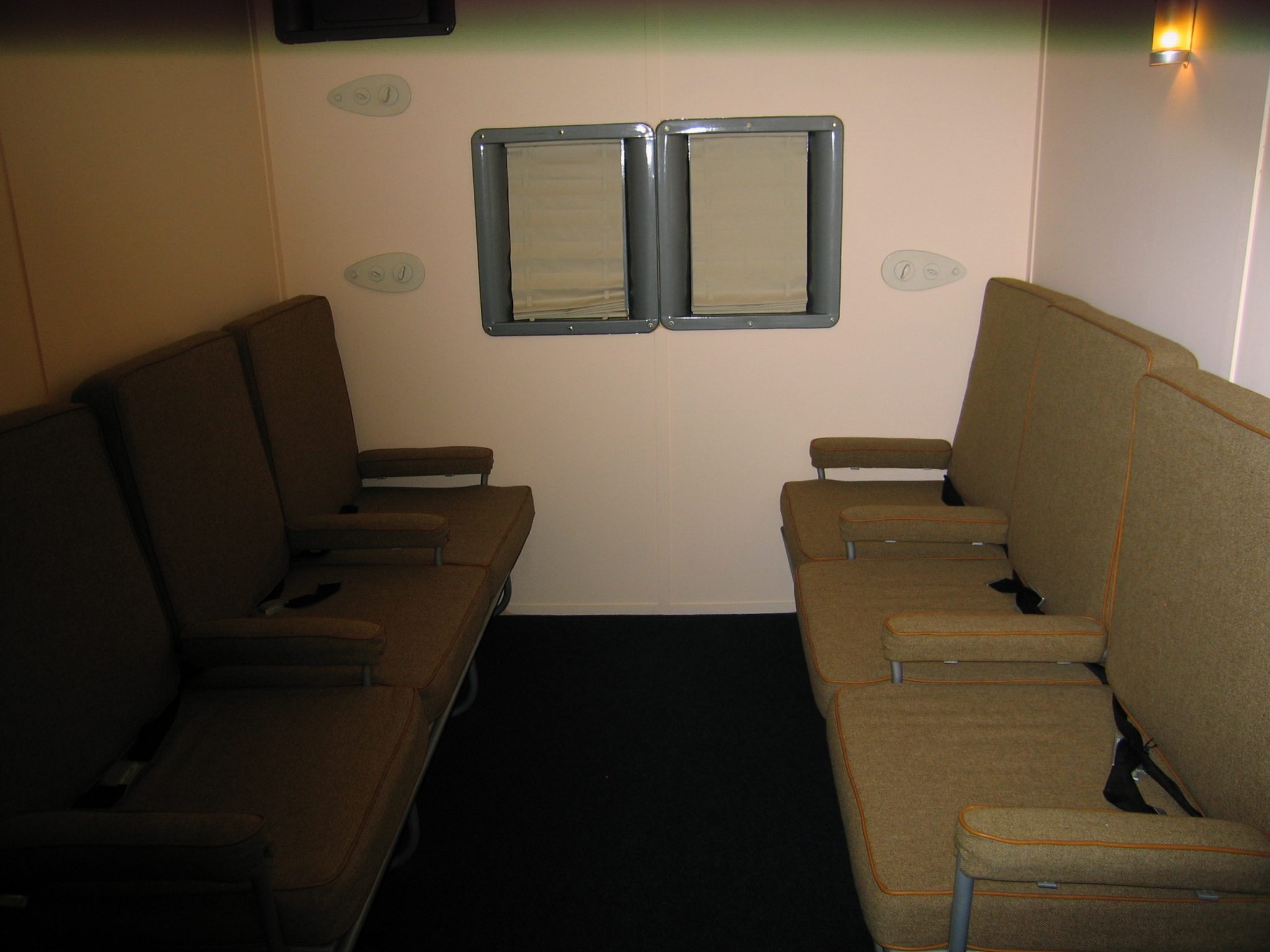 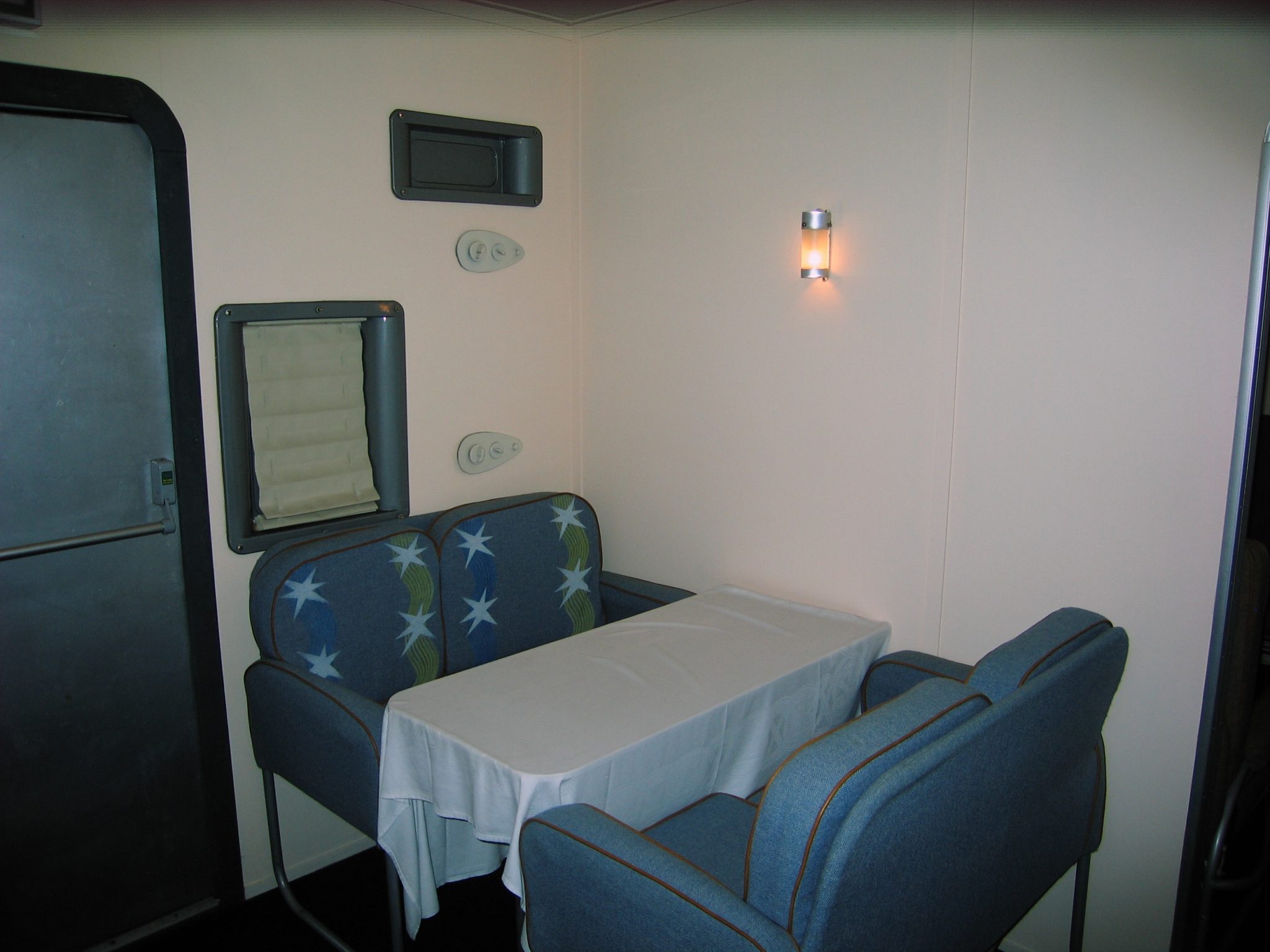 The photo immediately on the left is one of the passenger compartments on the Boeing 314.

The photo below left is one of the dining areas.

The Pan Am Clippers, as flying boats, created the tradition of the Pan Am pilots wearing white hats, as did ship captains of the day.

The seating areas could be converted to sleeping berths. Although the Clippers in standard configuration carried fewer than three dozen people, during World War II and in post-war configuration, the aircraft carried some 60 passengers.

Flight Deck: This area is huge. Of course, you need relief pilots, a radio man, a navigator and a flight engineer. The sleeping area for the pilots is in the huge nose area ahead of the cockpit and is accessed through a hatch between the two pilot seats. It’s through here the crew accesses the nose for the mooring lines. 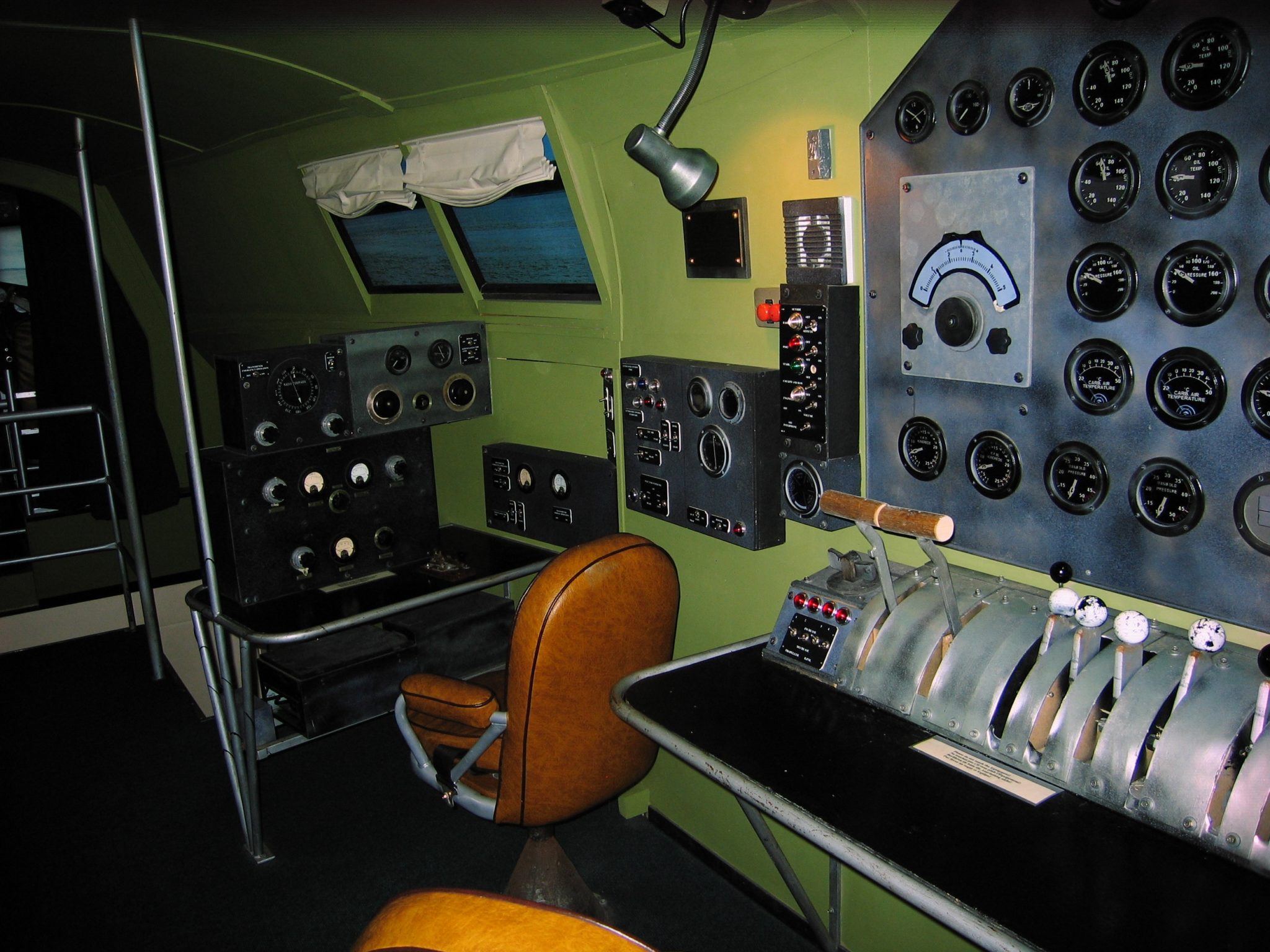 Radio communication, of course, was in its infancy. Voice radio was available only about 20 miles off shore. Otherwise, it was all Morse code. Pan Am requirements were that the radio operator had to be able to send or receive 30 words per minute. Given the dah-dit-dash system of Morse code, this was quite the feat.

The B314 cruised, in still air, at 155 mph. Post-war, one B314 encountered headwinds so severe its speed was reduced to 55 knots. Facing fuel exhaustion, the pilot ditched next to a US Coast Guard ship; all passengers were rescued. The B314 was sunk as a hazard to navigation. 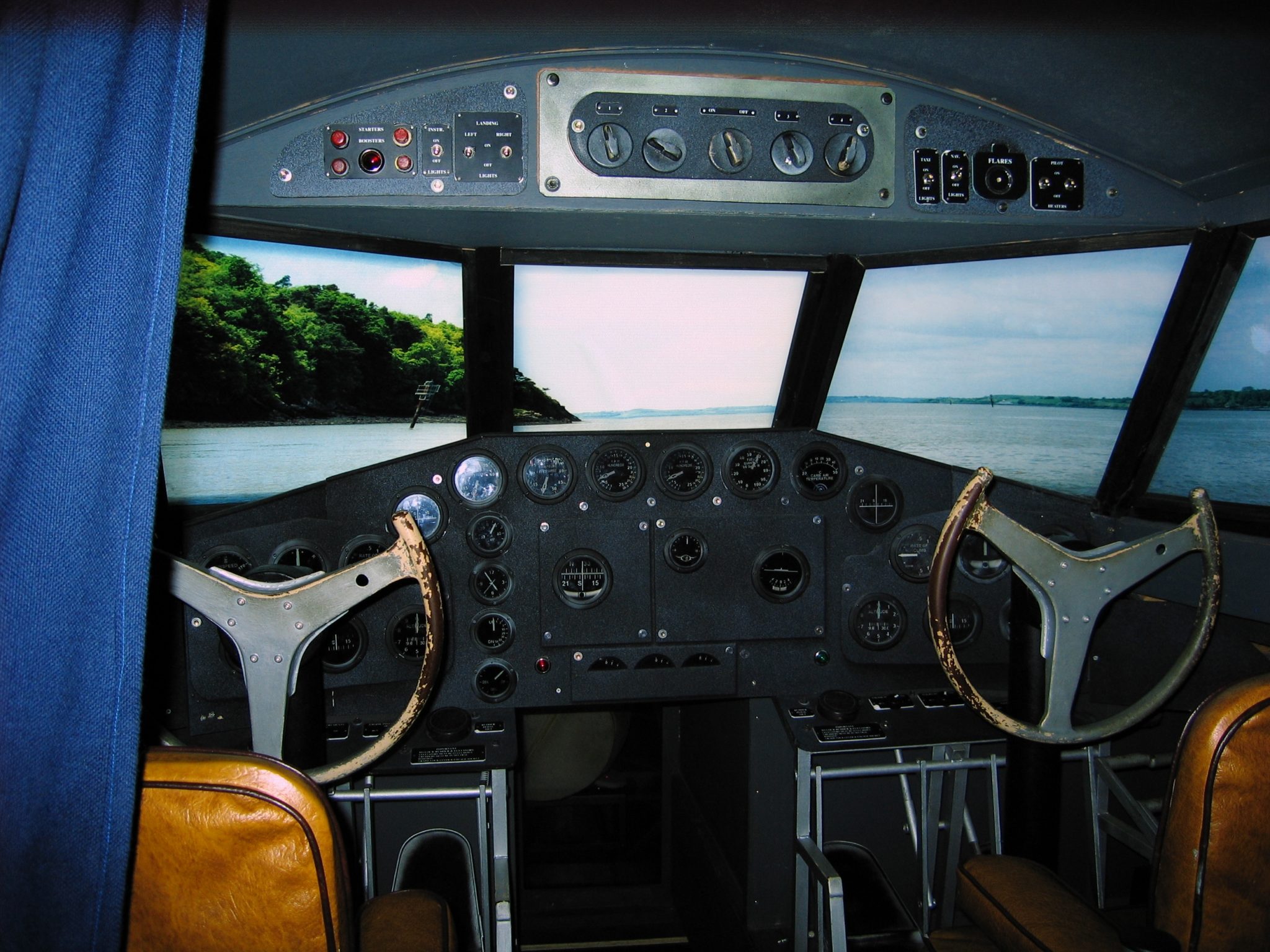 The Clippers also had a honeymoon suite/stateroom in the aft.

Typical air fare, according to the Museum, was the equivalent of today’s $10,000.

World War II, of course, advanced the use of land planes and created land airports all over the world, dooming flying boats. Cagey Juan Trippe, CEO of Pan Am, recognized this outcome instantly and arranged for the US government to take over nine of the Pan Am Clippers (with continued operation by Pan Am). Three others were sold to BOAC.

The Foynes Flying Boat Museum has a book about it, as well as some DVDs and other items that may be purchased.

We most appreciate the hospitality and courtesy of Margaret O’Shaughnessy, who arranged for us to visit the Museum during its closed season, and to Barry O’Kelly, our guide.

If you are ever in Ireland, by all means this is worth the trip. You get to see the good ol’ days of flying–and they’ll make you an Irish coffee.