Book Review: American Airlines, US Airways and the Creation of the World’s Largest Airline

This is the first book about the merger of American Airlines and US Airways, a combination completed only last December. 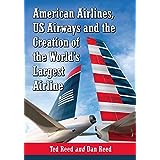 Ted Reed is the aviation writer for the web’s The Street. He was also the aviation reporter for The Miami Herald and the Charlotte Observer and worked for US Airways in communications when the airline was the pre-America West Airlines partner. I’ve known Ted for many years and he often calls me for information and comment on The Street. I had the honor of doing some proof reading of this book.

Dan Reed, who is unrelated to Ted, was the aviation reporter for The Ft. Worth (TX) Star-Telegram, known locally as the Startlegram, for many years and later for USA Today. Like Ted, Dan often called me when I lived in Dallas and was editor/co-owner of Commercial Aviation Report (CAR) magazine. We often compared notes about Southwest Airlines and American Airlines and their colorful leaders, Herb Kelleher and Robert L. Crandall. In 1993, Dan wrote what might be loosely termed a biography of Crandall’s leadership of American, The American Eagle, the Ascent of Bob Crandall and American 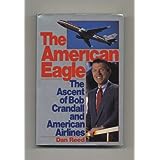 Airlines. His introduction begins recounting a phone call from me in my role as editor of CAR, polling key industry observers about the most influential person in the airline industry that year. Crandall came in second in the poll that year.

The Reeds combined for Creation; Ted Reed took the US Airways story and Dan Reed the American story. The result is seamless. Usually two writers have two styles, but Creation is smooth and informative. It’s also short, a mere 187 pages before the Notes and Index, and at first I thought the story would be short-changed. But the Reeds pack in a comprehensive history of the multiple combinations of US Airways, up to and including the merger with America West; and relevant history of American’s march to the merger with US Airways. There is a lot of history of both airlines not included, but it may be argued that this is outside the scope of this book.

Dan Reed drew on long history of covering American to talk with Crandall, his successor Don Carty, who lost his job as the price for labor concessions, and Carty’s successor, Gerard Arpey. I understand this is the first time Arpey has really interviewed about his tenure as CEO and those dark hours and days during and after 9/11.

Ted Reed reached back and interview US Air’s CEO, Ed Colodny (it didn’t become US Airways until Stephen Wolf took over) and others. Both veteran reporters drew extensively on their own coverage to add to the book.

Unfortunately, the executives of US Airways, Doug Parker, Scott Kirby and others, declined to be interviewed because they were immersed in the American merger during the time when much of Ted Reed’s work was being done. But Ted’s own extensive reporting provides relevant quotes and comments from Parker & Co., and if you didn’t know they didn’t provide interviews, you’d never be able to tell.

Included in the book: US Air’ and Piedmont, US Air’s Wolf days, the labor wars between the pilot factions at US Airways and America West right up until the US-AA merger finally resolved most of the seniority issues. American’s early Crandall days (though with only passing reference to the battles with Braniff, covered extensively in Dan Reed’s Eagle), Carty’s fractured leadership, Arpey’s dramatic decision to ground all AA flights on 9/11, his efforts to avoid placing AA into bankruptcy and Tom Horton’s efforts to bring AA out of bankruptcy.

There are a few typos and errors (none in the sections I proofed, I’m happy to say). One falls into the Freudian slip category. Ted Reed makes reference to US Air’s “short-loved” (as opposed to short-lived) NASDAQ stock symbol UAIR, adopted after one of two bankruptcies. Ted wrote he may leave that when we emailed him about this.

The other two typos are more significant, if harmless to the overall story. Doug Parker’s birth year is listed as 1951, adding 10 years to the youthful-looking CEO. The huge American order for 465 Airbus and Boeing aircraft is listed as July 2010; it was 2011. TReed says these should be corrected in subsequent printings.

Having been in this industry since 1979, I covered many of the events the Reeds write about and know many of the people involved. Crandall remains one of the industry’s icons. Parker and his management team never received the credit and respect they deserved at America West and then US Airways. They get both in Creation.

3 Comments on “Book Review: American Airlines, US Airways and the Creation of the World’s Largest Airline”