Dec. 21, 2015, © Leeham Co.: Mitsubishi Aircraft announced last week that its MRJ90 program was undergoing a review following three test flights. A new schedule could be announced as early as this week, but by the end of the month is also possible.

The company didn’t indicate what prompted the review, but the 7news service reported that “safety” issues were involved.

A delay in delivery to the first customer, ANA, slated for 2Q2017, is almost a certainty. This isn’t good news for the program, which is already more than two years late.

The first flight was in October. With only two more flight tests in the ensuing two months, the implications aren’t encouraging. Four Flight Test Vehicles (FTVs) were to come to Moses Lake (WA) in the USA next year to engage in full flight testing for certification.

There is too much not known outside Mitsubishi at this time to speculate about the issues, the amount of delay and the impact on the program. 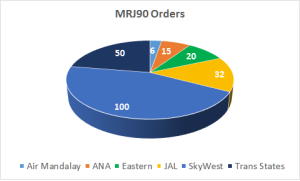 But it’s potentially ominous for a huge portion of the order book. The customer concentration with two US carriers is huge. Trans States Airlines and SkyWest Airlines have 67% of the backlog. SkyWest accounts for 45% and Trans States 22%. These two airlines operate for a variety of US major carriers, and in any event, labor Scope Clauses must be relaxed to allow for these to operate under the contract with the pilot unions. The MRJ90 weighs more than currently allowed under the Scope.

A third US carrier, Eastern Airlines, has a further 20 on order, representing 9% of the backlog. A start-up airline, there is no Scope Clause to contend with but the risks inherent with a start up exist.

Any substantial delay could put any of these orders at risk; cancellation clauses are common for new airplane programs if timelines and performance targets aren’t met, although we don’t have any insight about the contract provisions with the MRJ.