21 December 2015, ©. Leeham Co: Bombardier (BBD) received certification of the smaller CSeries, the CS100, by Transport Canada Thursday.  Rob Dewar, vice president of CSeries, reflected on the journey to certification in an exclusive interview with LNC. 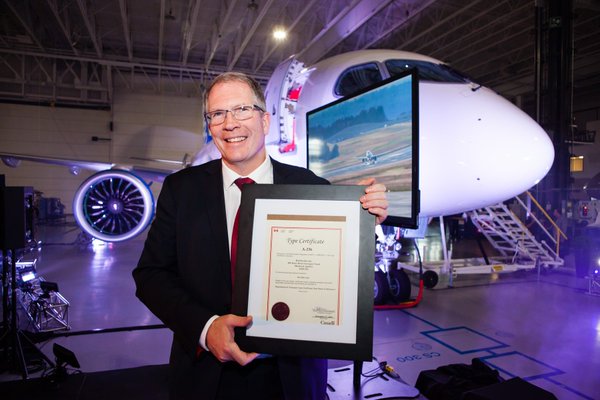 The interview was done against a backdrop of more than two years of delays, which in turn drained the coffers of BBD. To save the project and let it prove its game-changing character, management sold 49.50% of the CSeries program to the Province of Quebec for $1bn and 30% of its train division to Caisse de dépôt et placement du Québec, for an additional $1.5bn.

Dewar has managed the project from the program launch in 2008. The transcript of the interview follows.

LNC: First of all Rob, big congratulations. After all the delays, it must feel great to have got the certification when you said you would.

Rob Dewar: Thanks Bjorn, yes it feels great. Things have gone really well over the last nine months and we got certified when we said we would. We expect the CS300 to be certified as well within the next six months.

LNC: Looking at the last year, things have gone to plan. This is very different to the years before, where delay was added to delay. Tell us about it.

LNC: OK, that is with an engineering surrounding who knows the aircraft like its pocket with the full access to spares and a flight crew that can interpret and filter every spurious warning. Your next big challenge will be the Entry Into Service (EIS) with Swiss in Q2 next year. This has to go well; you can’t afford another entry into service like Q400.

RD: We have managed quite a few entries into service and we have good confidence that the CSeries will go well. As I said, the F&R has gone extremely well. We have a 100% dispatch reliability and we will continue this testing until Swiss gets their aircraft. We really trust the aircraft.

As an example, we flew P1 that is here for the press event from Orlando to Wichita Wednesday; Wichita-Atlanta yesterday afternoon and we started its flight home to Mirabel at 5 minutes past midnight today for a landing at 2AM in really bad weather.  You just don’t do that ahead of such an important event (the Certification ceremony at 8 am) unless you have full confidence that the aircraft will get here.

We are not naïve. There will be problems to solve at EIS and we are setting up a comprehensive EIS support organization together with Swiss. But the testing has shown that there should be no big problems to expect. We are putting a very mature aircraft into production.

What took them so long

LNC: Let’s talk about how you got there. You had a long period when things where moving really slow. What was the problem?

RD: Apart for the engine problem that we had, there was no other hardware-based delay. All testing of hardware went well. For example, nothing broke during the static structural tests and we found margins in our wing that we will translate to future customer value.

What held us back was software. CSeries’ functionality is largely software based. Its Fly-By-Wire (FBW), Engine electronics and Avionics system contain some 11-12 million lines of code. This is a magnitude larger software system than our previous projects.

When we started our meetings with Transport Canada on how to qualify this large software base, it became clear that things had changed. The software validation would be vastly more elaborate than the last project. The authorities now required traceability of each realized aircraft function on a level not demanded before. It meant that our partners like Parker Aerospace for the FBW had to conduct much more work than planned and we and our partners issued thousands of documents beyond what we had planned.

Everything took much longer than anticipated. There were no special areas that gave problems, it was just vastly more work that we had foreseen. The positive out of all this is that the functionality of each subsystem got a much higher maturity level before entering our test rigs. The suppliers had to test to a very high maturity at their rigs, then in our rigs with other partners and when finally the software versions were released to flight test, they were of high quality. The test flights now were there to verify what the test rigs had shown, not tuning the software or finding faults.

We can see the result of the effort in our F&R flights on P1. The present software load, version 6, is very stable. For EIS we will have version 7, which is essentially a further cleaned-up version. Only 25% of the code is touched and part of that is to include optional functionality which will not be activated at EIS. An example would be steep approach for, e.g., London City Airport. The flight tests to certify these optional functions will be done during the spring, after Certification. Once Certified, we then activate these functions for the customers if they have selected them.

LNC: Time for some touchy questions: With the serious delays, you must have got a lot of pressure to take shortcuts and push nice-to-have functionality to be completed after EIS. What is missing from your original plans?

RD: It sure has been tough, quite a number of times. We have been lucky to have been able to convince top management to not force us to cut corners, to do it right first time around despite the costs.  There is no functionality missing from the original plans for the aircraft at EIS. 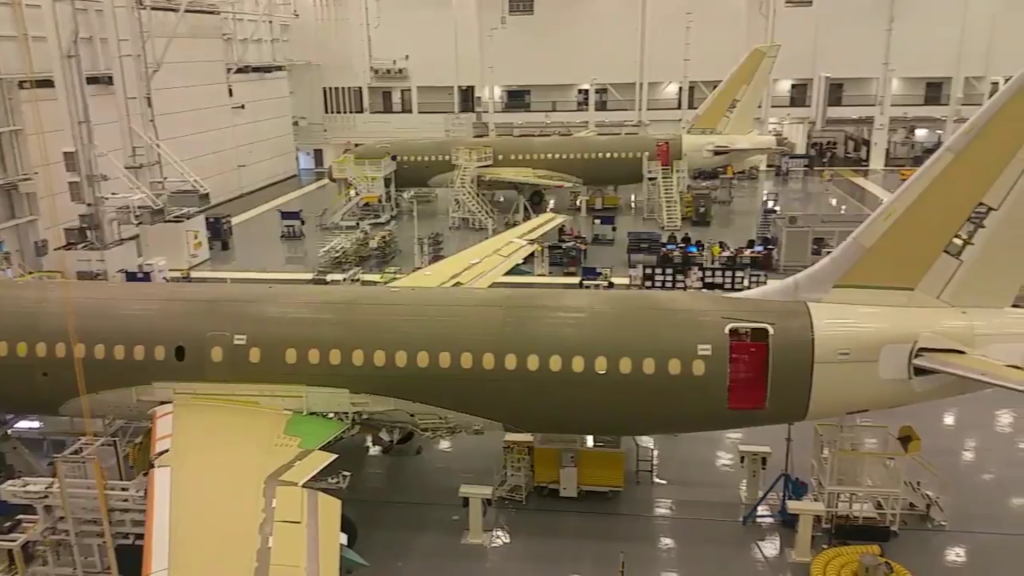 LNC: What about rework? How much time has been planned for rework for aircraft P2, the first aircraft for Swiss?

RD: There is no planned rework for P2 or later aircraft. They will get delivered as they are built on the final assembly line. We have in total one week of contingency in our delivery plan to Swiss and that is for anything unforeseen that crops up. Part of no rework is that we have not needed to change any vital hardware as a result on flight tests.

As discussed at the Paris Air Show, the aircraft is clean, without vortex generators or other patches to fix issues. The aircraft will get delivered as designed. Any changes we had to make on internals or at system level we have been able to build in at production of the aircraft. The aircraft goes from production straight to flight test and then to delivery.

LNC: I have to give you credit for achieving that. You also managed the inevitable weight creep well; you are within 5%, a very good figure. With your aero and structural margins, you could increase weights to meet brochure performance and in some cases exceed these.

RD: Yes, weight management has gone well and we have further margins that can be used for future improvements. We discussed at Paris that we can standardize on the larger CS300 winglets later on and we have more to find in how we handle the open main landing gear wheels. We have also been conservative in how we have given our performance data. We have a passenger + bag weight of 225lb.

LNC:  You are right, when I use the normal 210lb, our model gives 3,500nm as your comparative range to A319’s and 7MAX’s 3,800nm. That’s transcontinental range and even transatlantic range for  London to US/Canada East Coast, for example.

We know that you claim around 10% better fuel burn than the re-engined competition, A319neo and MAX . You are also lighter, which gives lower landing/underway fees. What about maintenance costs?

RD: We are one generation ahead of the competition there as well. A-checks are at 850 hours and C-checks at 8,500 hours, with heavy structural checks at 12 years compared to our competitions’ eight years. We also don’t have daily/weekly checks,. The first check is at 100 hours and everything before that is on demand. In practice, an operator can fly the aircraft for over a week before needing to do the first check. During this time, he does not even need to fill oil; we have an extra capacity system for that purpose.

LNC: We will come back to fuel burn and maintenance costs in a future deep analysis of the CSeries, but one can see that you will be very competitive. Now everything will depend on the entry into service with Swiss. There, the aircraft will be flown by flight crews which can not filter your aircraft’s spurious warnings and maintained by operational airline personnel. Any last thoughts on that?

RD: I can assure you that we are not underestimating the challenge. We might have good reliability in our tests but we know there will be problems, for sure. Therefore we are really making sure we will be organized to take on the challenge. We will be ready to face any problem thrown at us and Swiss.

The CSeries program is one full of opposites:

The CSeries has the technical characteristics to be a game-changer. What remains to prove is the in-service reliability and then that the organization can sell the result. Should this be matching the technical capability of the aircraft, the CSeries will be the game-changer that Bombardier claims it has (and badly needs).

The market will wait for the news and be there for those that succeed.