The previously announced rate reduction is effective in March.

Boeing took an $885m pre-tax charge ($569m after tax). the company had warned in SEC filings a forward loss could happen if the commercial markets didn’t pick up. Today Boeing said the global air cargo market hasn’t picked up, and in fact has reversed itself, falling off. Boeing was counting on the air cargo recovery to fuel a resurgence in the ailing 747-8 program.

Even at the reduced rate of one-half airplanes a month isn’t going to solve Boeing’s problem. 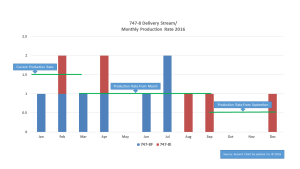 Click on image to enlarge. (The current production rate is 1.3/mo, rather than the 1.5/mo as depicted on the slide.)

According to the Ascend data base, there are 12 747s remaining to be delivered this year (one already has been) that are current production aircraft, not white tails that have been sold. There are gaps in May, October and November for scheduled deliveries.

Boeing’s corporate communications office in Chicago declined to say whether any of the production and deliveries will be stretched out to fill these gaps, citing the quiet period in advance of next Wednesday’s earnings call. The spokesman said guidance will be provided then.

There is one new-build 747-8 scheduled for delivery in May next year.

“Global air passenger traffic growth and airplane demand remain strong, but the air cargo market recovery that began in late 2013 has stalled in recent months and slowed demand for the 747-8 Freighter,” said Ray Conner, Boeing vice chairman and president and CEO of Boeing Commercial Airplanes, in a statement. “While we remain confident in the 747-8’s unique value-proposition and an upcoming replacement cycle for late-model 747-400 Freighters, we’re taking the prudent step to further align production with current market requirements.”