The US has the advantage that the airspace has one Air Navigation Service Provider (ANSP), i.e. one organization for the Air Traffic Controllers. We will now look at the next generation Air Traffic Management in Europe where the project is called SES, Single European Sky. I wrote about SESAR, Single European Sky ATM Research, last week. This is the technology project for implementing ADS-B based ATM, SES is the European Union initiative involving all ANSPs in Europe in the change process. 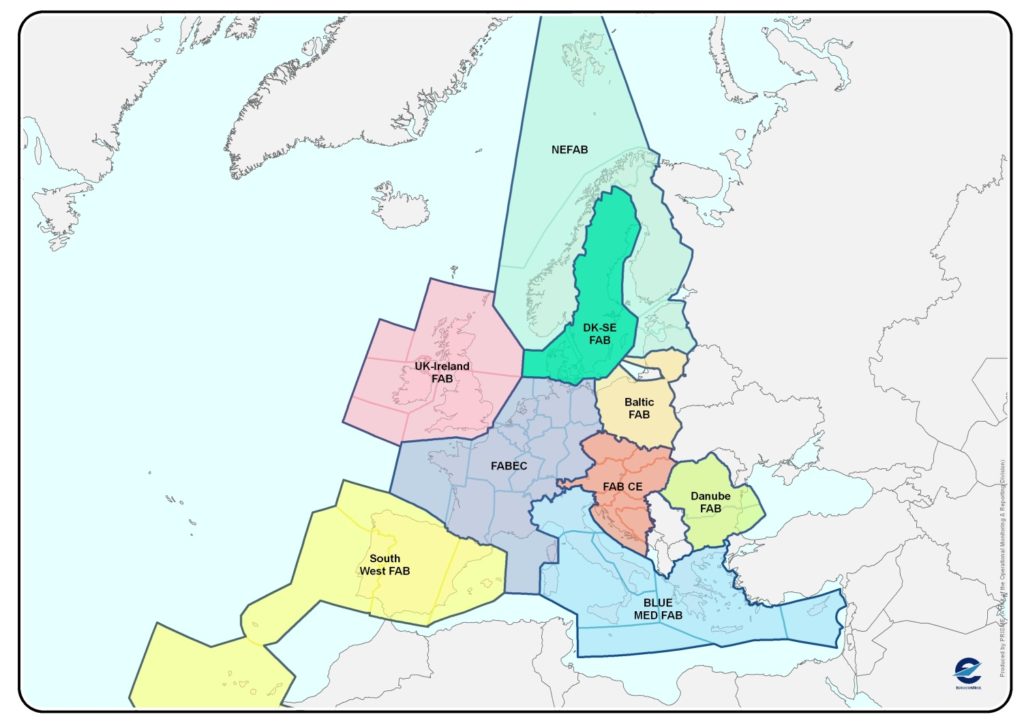 Presently Europe is divided into 37 ANSPs (the US airspace has one). The ANSPs operate within the national borders of the European states, each serving its own country. SES has proposed to change the present 37 Functional Airspace Blocks (FABs) to 9, Figure 1

Air space controllers rejecting change process
The changing of the airspace to the one in Figure 1 and the organisation of the national ANSPs into larger ones each controlling its FAB has run into problems. The unions organizing the people working in the 37 ANSPs (17,000 Air Traffic Controllers controlling 30,000 flights a day) said the proposal for the changes “is based on market principles and is a top-down approach and focus cost reductions. It would jeopardize safety and the number and quality of jobs.”

As we saw with the NextGen pilots for the US airspace, the implementation of a more modern and rational European Airspace is a process where the people and organizational component is the more challenging one, not the technical implementation.

To date, very little progress has been made to the Single European Sky and the new Functional Airspace Blocks. We remain with the national organizations and changes results in strike actions from the affected Air Traffic Controllers.

IATA gets involved
To help the SES project to find the motivation for change, the association for all airlines affected by the present state, IATA, commissioned an independent report to quantify what’s involved in the change or no change.

The research has been done by the established institute SEO Amsterdam Economics which is a non-profit organization connected to the Amsterdam University.

SEO found that that air transportation is intrinsically interlinked with economic growth in a virtuous circle, Figure 2.

SEO summarized their findings of change versus no change in the left part of Figure 3. The right part includes fixing of the airport constraints that are starting to appear. 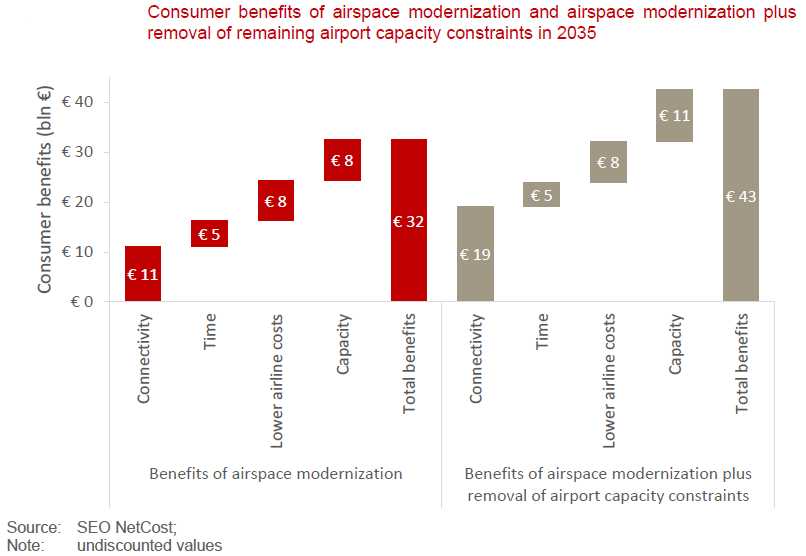 Figure 3. The gains with a SES implementation for European airspace by 2035. Source: IATA

IATA was surprised by the figures and scrutinized the study. It found that SEO had been using conservative estimation methods.

Why would the gains be so large for European citizens? Presently there are a lot of extra distances flown and delays resulting in increased fuel burn and emission of CO2 (directly linked to fuel burn). 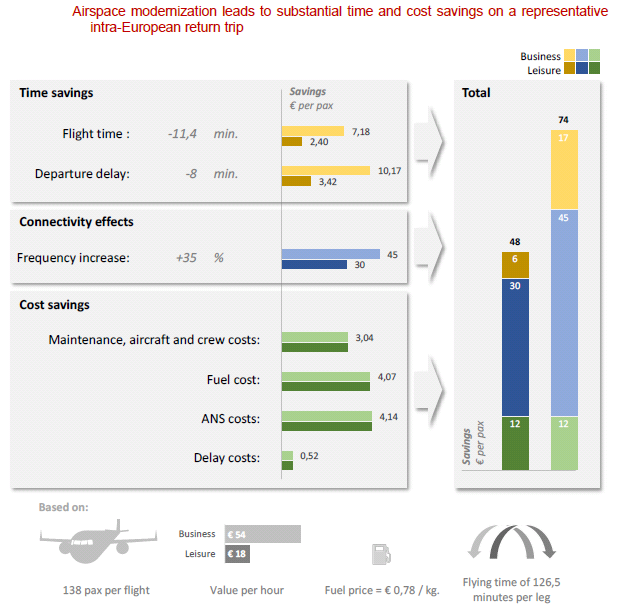 The report exemplifies the effects with on typical two hour flight within Europe, Figure 4. As can be seen, the total costs savings which would be directly seen in the consumer ticket price would be 74€ for the business traveler and 48€ for the leisure traveler.

Way forward
The IATA study has quantified for the European politicians what’s at stake. It’s now up to EU and the country organizations to drive the change process so that changes in European Air Traffic Management can move forward a needed pace.