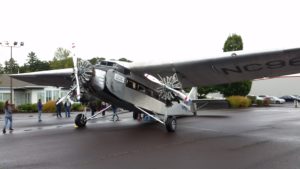 Oct. 4, 2016, © Leeham Co.: The Ford Tri Motor waddled up to the private air terminal in Aurora (OR) Sunday, with a three Pratt & Whitney radial engines running smoothly until shut down. Then the No. 3 engine backfired several times, spitting flames from the exhaust stacks.

This was its introduction of the ancient airplane to a score of people who waited more than an hour for rain to stop and the ceiling to rise to about 2,000 ft so short, 15 minute rides could begin.

With taxi in-and-out, the entire experience would last all of 30 minutes, not long for the $70 fee. But then, how many times does the opportunity to ride on one of aviation history’s most iconic airplanes arise?

The Ford Tri Motor 5-AT, NC9646, S/N 8, made aviation history, according to EAA, the organization that operates the plane today. S/N 8 inaugurated the USA’s first trans-continental air service. The forerunner of Trans World Airlines, Transcontinental Air Transport, owned the airplane and operated the flight. NC8645 is painted in TAT colors.

The airplane, built in 1929, is in spiffy condition. The corrugated metal exterior shines, even on a rainy day. The interior is to 1929 standards, including seat belts (though these are today’s models), which were optional then.

The Ford 5-AT carries 10 passengers. The smaller 4-AT carries eight. EAA also has this model in its collection, also airworthy.

After TAT, NC9645 was operated by Grand Canyon Airlines, TACA, Mexican airlines and private owners. Casino magnate William Harrah eventually purchased the airplane and put it on display with his famous automobile collection.

TWA used the airplane in 1975 and flew it from Reno (NV) to Newark (NJ) to commemorate its air service.

The aircraft passed from Harrah to a company in Idaho and then to Evergreen Vintage Aircraft. It was put on display at the new museum in McMinnville (OR), a 40 minute drive from Aurora, where LNC caught up with the airplane.

Liberty Aviation Museum in Ohio purchased the airplane in 2013. The aircraft is on loan to EAA. 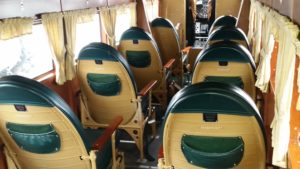 The interior is cramped and the seats uncomfortable, though no more so than those in today’s Bombardier’s CRJ and Embraer’s ERJ regional jets. Whereas the regional jets can fly 1,500 miles or so in three hours, the Fords cruise at an advertised 122 mph for a maximum 560 miles.

The Ford’s engines are noisy, assaulting the ears. But with a flight just 15 minutes long, the three engines were a symphony throwback to the early, early days of commercial aviation.

The videos below don’t adequately convey the noise of the engines.

Ford Tri Motor arrives at terminal. Be sure to listen for the backfires as the engines shut down right at the end of the video.

Servicing a Ford Tri Motor. The pilot fills No. 3 engine with oil and talks a bit about the Fords.

Leaving the gate. The video doesn’t do justice to the noise from the engines.