There was once a number of manufacturers producing small airliners. British Aerospace (BAe) produced the 19-seat Jetstream and Beech the 19-seat 1900. Saab built the 340 and later the 2000. BAe tried to update the old Hawker Siddeley 748 with the ATP, Advanced Turbo Prop. Fokker upgraded the F-27 to the F-50. Embraer got its start with the small Bandierante and really hit the mark with the Brasilia.

Bombardier produced the Dash-8 40-seat turboprop in competition with ATR’s ATR-42 and both compete with a 70-90 seat turboprop. BBD dropped its Dash 8 and barely holds on with the Q400. ATR is the dominant player now. (China produces a turboprop, but it’s mostly a captive-market airplane.)

This leaves smaller, independent regional and commuter airlines in a real bind. There are simply no replacements for the 19- to 30-seat airliner, save one: the Viking Twin Otter. More about this below.

There are several choices for the very small aircraft, each designed with a versatile mission. Each is a single-engine aircraft, all powered by versions of the Pratt & Whitney Canada PT-6. Range and performance is similar.

Each of these airplanes was on display at the Abbotsford Air Show last week. Abbotsford, about a two- hour drive north of Seattle, is a growing event that is probably the largest in Western North America. LNC visited the show for the first time. We spoke with sales representatives of the Caravan, Kodiak and Pilatus; and with the procurement officer of Viking, among other activities.

With LNC’s focus on commercial aviation, we asked the four companies about the prospects and use of their aircraft by small airlines that face aging aircraft and which have limited financial resources to buy replacement aircraft.

One challenge, of course, is that some of the airlines operate 30-34 passenger aircraft and there are none in this category being produced today. This means downsizing in their cases.

Each of the aircraft at the Abbotsford show serves multi-role missions: passengers, charters, cargo, medivac, humanitarian flights and charters for high-end resorts.

The aircraft all have large doors in the aft fuselage that permits cargo loading and medivac capability. Each has a range of 1,000 miles or somewhat more. Each cruises from less than 200 knots to as high as 285 knots (the latter being the Pilatus). All are powered by versions of the PT6, equipped with either three, four or five-blade propellers.

As for the smaller aircraft needed by airlines, the Twin Otter is the closest, at 19-passengers. But at a price of $6m-$7m, depending on the configuration, it’s largely out of the price range for the smaller carriers.

More than 100 Twin Otters have been delivered by the privately held Viking, which won’t disclose how many orders have been placed. Most are to governments,

One of the airlines using the Viking Twin Otter. Source: Google images.

including 10 to Russia, which has interest in more.

Airlines are less interested, the company says. The Twin Otter first entered service in 1966, at a time when there was still a fairly sizable need for rough-field, STOL (Short Take Off and Landing) aircraft, a feature of the airplane. A few commuter airlines also used the airplane Air Illinois, from lakefront Chicago Meigs Field with its short, 3,900 ft runway, to the Illinois Capitol of Springfield, was one such user. Even Ozark Airlines, then called a “local service carrier,” used the Twin Otter in competition with Air Illinois over the same route.

Today, the company says, few airlines need a “low and slow STOL aircraft” like they did when the Twin Otter was developed.

“The Otter is a niche aircraft, a rugged aircraft,” a company official said.

One inhibitor to sales: the original Twin Otter was built so “robustly” that many are still flying. More than 900 were built.

The Cessna Caravan PT-6 engine, which is also used on the Viking Twin Otter, Pilatus and Quest Kodiak in variants. the four aircraft were on display at the Abbotsford Air Show last week. Photo by Scott Hamilton.

More than 2,500 of these utilitarian airplanes have been built since the first flight in 1982. The principal users are FedEx and various air forces, but with nine passengers, it’s also been used in airline service. It can carry up to 14 passengers. It’s cost ranges from just under $2m to more than $2.5m, depending on the configuration.

An under-belly cargo pod is a common feature.

The Caravan is capable of being equipped with floats.

The Pilatus also is a nine-passenger airplane when in all-passenger configuration. This is a pressurized aircraft, with a range of 1,845nm, the highest in the group. It is capable of unimproved airfield operations and has short field performance.

The airplane is and has been used by several airlines, ranging from Bhutan to the US. Governments also use the airplane. In the case of the US, Customs and Border Protection is an operator. 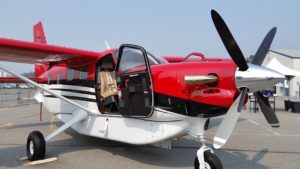 Quest Kodiak at the Abbotsford Air Show. The airplane was designed to be an inexpensive aircraft for missionary work, but it has other uses as well. Photo by Scott Hamilton.

The newest entrant into this field is the Quest Kodiak. This is an eight passenger aircraft that was designed for STOL operations, capable of taking off in less than 1,000 ft with a full load. Like its competitors, it can be configured as a business aircraft, for passenger operations, cargo and other uses. It can be equipped with floats.

The price is between $2m and $2.5m, depending on the configuration.

More than 200 have been sold; with 100 delivered. Its principal use was intended to be for missionary service, but an order for 20 from a Japanese charter company was placed in 2016.

Aside from the common uses, each of the companies LNC spoke with at Abbotsford touted the reliability and durability of the PWC PT-6 engine as crucial to the operation of the airplanes. The PT-6 has been around since 1960 with very low engine shut-down rates and long Time Between Overhaul periods of up to 9,000 hours.

The Tecnam P2012 Traveller of Italy is an emerging player. Cape Air of the USA signed a commitment for up to 100 P2012s. The twin-engine 11-passenger, high-wing aircraft is powered by the Lycoming TEO-540-C1A piston. Like the other airplanes, the P2012 is a multi-role aircraft. It’s intended use includes hydro, medivac, cargo and parachuting. Its cost is about $2.3m. Delivery is slated for 2019.