Restructuring plan did not work

Etihad has been giving Air Berlin a chance to show that its restructuring to a network carrier would work (started last fall). Etihad provided Air Berlin a €350m loan in April, to make continued operations possible. It also said it would continue to support the airline for 18 months.

Traffic went down, costs up and the many changes caused havoc with Air Berlin’s passenger customers. Bookings went down. 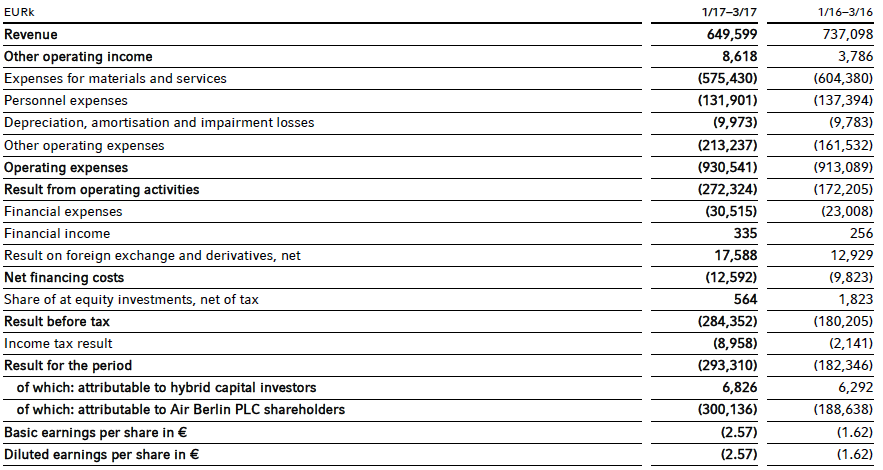 Once the 29% owner didn’t want to inject more cash to keep the operation going, the management had to file for bankruptcy. The German state was contacted in June to guarantee further loans, but these talks gave no results.

Losers in the bankruptcy

The losers will be the shareholders (share capital is negative since years), loan givers (Abu Dhabi banks have loans of €800m to the airline) and the lessors who own Air Berlin’s fleet.

GECAS is also a major lessor to Air Berlin.

Of the public lessors, AerCap has the largest exposure. The bankruptcy should come as no surprise for AerCap. The 1Q2017 results told a clear story.

It’s now for AerCap to find new homes for the 10 A330-200s after November. The German state has given Air Berlin an emergency loan of €150m to get holiday passengers home and push the final end of operations to after the German general elections in September.

The €150m shall keep the airline operating until end November.

Lufthansa wet-leased 38 A320s from Air Berlin in a deal earlier in the year and is interested in taking over more of the airline. It can now cherry-pick the parts which are interesting for its Eurowings low-cost airline. The negotiations have already started.

For other parts, like the Niki leisure airline and the majority of Air Berlin’s 8,000 employees, the future is uncertain. For Etihad, it has it two largest partner airlines in bankruptcy proceedings (Alitalia is the other one).