April 20, 2018, ©. Leeham News: In the last Corner, we discussed how to stabilize an aircraft in pitch so it could fly stably straight ahead. For this, we needed a horizontal tail which had a negative lift.

This will buy us a short-term pitch stability, but not a long-term one. Why we will explain in this Corner.

Normally, stable aircraft (all commercial and private aircraft are of the stable type; only military fighters are allowed to use marginal stability to improve performance) have three modes of longer-term movement which are part of the aircraft’s natural way of flying.

These movements appear despite the aircraft at first flying stably straight ahead, perfectly trimmed in pitch, yaw and roll. One could say the three modes are part of the DNA of a flying aircraft. If one should suppress one of the movements, then the aircraft would feel awkward to fly for the pilot in normal maneuvers.

The first mode of oscillation is the most docile one. Those who have flown a private airplane on a long trip with a wings leveler autopilot (we come to why this is the most needed autopilot support) know what I’m talking about. With the wings leveler keeping the aircraft from dipping its wings, one trims the aircraft with the pitch trim to keep the altitude.

After careful pitch trimming (pitch trim adjusts the amount of downward lift of the horizontal tail) and flying hands-off, the aircraft flies straight for a while but then starts to cycle up and down in a slow mode, the Phugoid. When a tiny disturbance turns the nose down the slightest, the aircraft gains speed. As it gains speed, lift increases and after about half a minute it starts climbing, Figure 1. When climbing, it loses speed, so gradually the nose goes down again after another half minute. Then the cycle recommences with the aircraft gaining speed while dipping the nose followed by an up cycle.

The fact the nose goes down when the aircraft loses speed is an important aspect of a stable aircraft. It means most aircraft will get themselves out of trouble (trouble here is losing so much speed the air stream breaks down and we are in stall) if the pilot just lets go of the stick.

In the description of the Phugoid, we presumed we had a wings leveler autopilot. If not, we would have suffered from a more troublesome mode than the Phugoid, the Spiral mode. The Spiral mode comes from the aircraft being stable in yaw. The vertical tail will make sure the aircraft returns in yaw to straight ahead after a disturbance. It has positive weathercock stability.

This weathercock stability will cause the aircraft to slowly start leaning over on one wing after the tiniest of disturbance. The leaning gets steeper and for most aircraft, it will take long to roll wings back to level; many will not roll back.

Spiral mode keeps the pilot the busiest. Take your mind off keeping the wings level for a few seconds and next time you check, you are hanging on a wing. If you are flying somewhere you have just steered off course.

Because of the Spiral mode, the first pilot aid one buys for a small aircraft is the wings-leveler. It’s a simple autopilot which uses the directional turn-rate gyro as the sensor (all aircraft have a turn-rate gyro, it’s one of the base instruments). The wings leveler makes sure we stay on course when flying. If we cycle a bit in altitude with the Phugoid in a private plane flying under visual conditions is often not bothersome. If it is, we need a pitch channel for the autopilot as well.

As an aircraft designer one can counter the spiral mode with more roll stiffness. To get more roll stiffness one increases the aircraft’s dihedral. This means we bend the wings up so any leaning followed by a sideslip mean the lower wing gets a longer horizontal part. It’s then more effective in producing lift and the roll is stopped.

But if we increase the roll stiffness of the aircraft too much we trigger the ugliest of the natural aircraft modes, the Dutch Roll.

The Dutch Roll is the most uncomfortable mode of aircraft movement for a naturally stable aircraft. It gets strong for an aircraft which is stiff in roll (with strong dihedral or wing sweep) and therefore has a weak spiral mode. The movement of the aircraft resembles the Dutch ice-skaters on their canals, therefore it came to be called Dutch Roll, Figure 2. 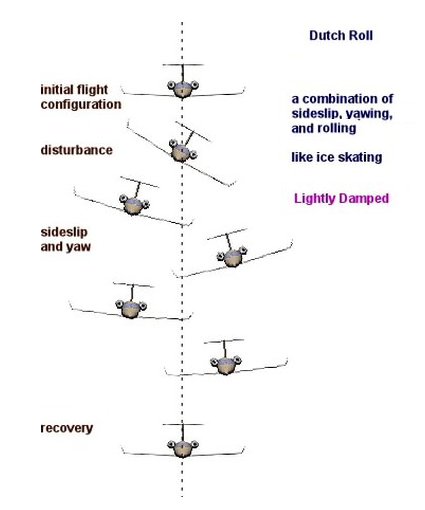 The sideslip and dipping of the wings are not too bothersome. But the wagging of the tail is. It’s a large problem for commercial aircraft as passengers in the rear of the aircraft get seasick from the movement.

Typically the low wing jet aircraft of today have wings which are angled upwards to make clearance for the engines, increasing roll stiffness. In addition, to lower transonic drag, the wings are swept and this increases roll stiffness further.

The result is an aircraft which is wagging the tail. To counter the wagging, all business and commercial aircraft have a yaw damper with a servo working on the rudder.  By stopping the tail from wagging, the sideslip does not start and the Dutch Roll is stopped.

As we started talking about yaw dampers and some autopilot modes to make an aircraft fly stable, we will discuss autopilots a bit more in the next Corner.