March 08, 2019, ©. Leeham News: Yaw stability, which we discussed last week, has in itself no tricky dynamic problems. It’s a matter of making the vertical stabilizer large enough to have enough weathercock moment on the aircraft.

The tricky stuff comes through the interaction of yaw stability and roll stability.

Dependent on the design of the aircraft this increase of the lift on the dropped wing can be weak or strong. Design principles which increase the lift are:

High wing means the aircraft’s center of gravity tends to force wings level. In addition, the fuselage blocks a part of the high wing during sideslip. It decreases the lift of this wing and increases roll stability.

An aircraft with dihedral will get a higher Angle of Attack (AoA) from the dropped wing from a sideslip, and the the leeward wing will get a lower AoA. This creates an asymmetrical lift which straightens the roll.

As a swept wing aircraft sideslips the windward wing gets a lower sweep angle and by it a wider effective span, Figure 2. 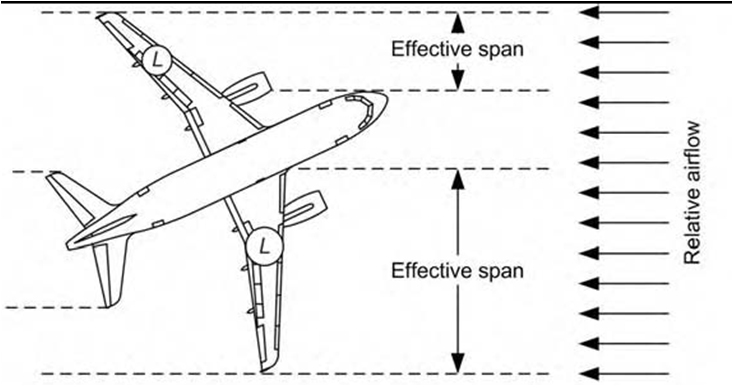 The leeward wing has a shorter span measured against the air stream. This creates a rolling moment to straighten the wings.

The stability in roll is nice to have as the aircraft doesn’t start hanging on a wing and wander off course when flying with the hands off the stick. But an aircraft which is stiff in roll will experience a nasty second effect, Dutch Roll.

The Dutch Roll is an uncomfortable side effect for an aircraft which has too strong roll stability combined with a too weak yaw stability. As the aircraft sideslips, it quickly rolls up and goes past wings level. This starts a sideslip in the other direction.

After one or two sideslips the aircraft is moving from side to side like the Dutch ice-skaters on their Canals, Figure 3. Therefore this movement came to be called Dutch Roll. 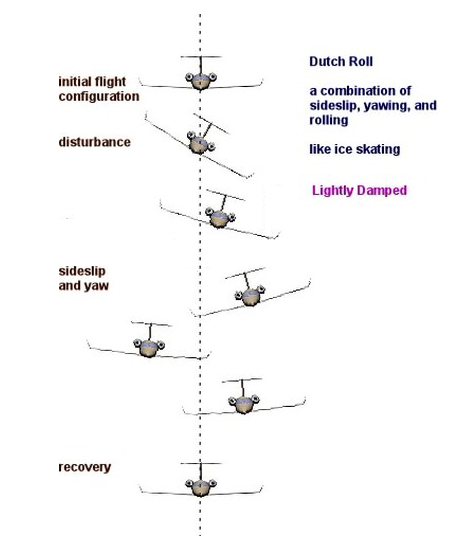 The sideslip and dipping of the wings are not too uncomfortable. But the combination with wagging of the tail is. It’s a problem for airliners as passengers in the rear of the aircraft get seasick from the movement.

Typically the low wing airliner of today have wings which are angled upwards to give ground clearance for the engines, increasing roll stiffness. In addition, to lower transonic drag, the wings are swept and this increases roll stiffness further.

The result is an aircraft which is Dutch rolling. To counter the Dutch Roll, all business and commercial aircraft have a yaw damper which keeps the aircraft from yawing when experiencing a short disturbance, by it stopping the Dutch roll.

A weak Roll stiffness will create spiral instability, however. This we will discuss in the next Corner.