Bjorn’s Corner: We are getting worldwide flight surveillance

April 12, 2019, ©. Leeham News: In the wake of the 737 MAX accidents an important news event last week went almost unnoticed. After years of preparation, the worldwide coverage of ADS-B via Satellite receivers started with a trial service over the Atlantic.

It’s the Aireon Company which started the trial on April 2nd together with Nav Canada and UK’s NATS (National Air Traffic Control Services). 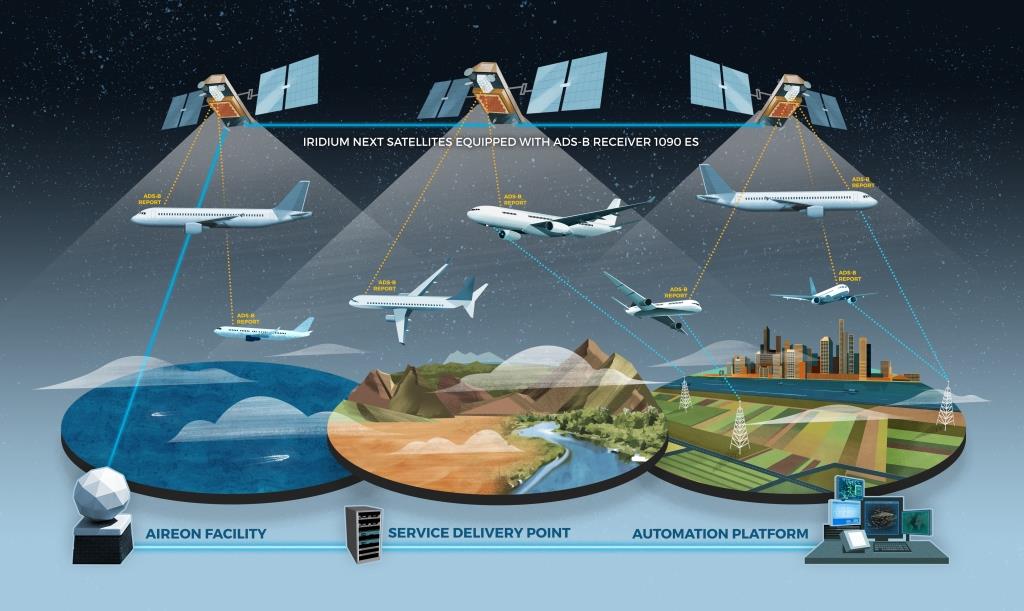 There has never been worldwide surveillance of air traffic until now. Large areas over the Atlantic and the Pacific Ocean has been un-surveilled.

This has forced large separation distances and the organization of the air traffic in in-efficient air corridors for these areas, where aircraft can’t overtake when faster or change altitude when needed to optimize fuel consumption.

We were lastly reminded of the large un-surveilled areas of the World when Malasia Air MH370 went missing without anyone knowing where it went.

ADS-B (Automatic Dependent Surveillance Broadcast), the system where all aircraft send out their position, altitude and speed each second, will be mandatory for practically all aircraft in US Airspace within eight months. This means each aircraft reports where it is and where it’s going every second, for any who wants to know.

But the systems receiving these signals for Air Traffic Control have so far been ground-based. Coverage has been limited by the curvature of earth. Aireon’s space-based ADS-B system now provides real-time air traffic surveillance and tracking of 100 percent of ADS-B equipped aircraft, worldwide.

Don Thoma, Aireon CEO points out what this means: “For the first time in history, we can surveil all ADS-B-equipped aircraft anywhere on earth. Our air transportation system has operated with a safe but less than efficient system in the 70 percent of the world that does not have real-time surveillance.  With the launch of our space-based ADS-B service, Aireon now provides a real-time service which optimizes flight safety and efficiency”

Improved visibility and control over previously un-surveilled airspace—especially across oceanic regions—will allow airlines to fly routes at optimal speeds and levels. An analysis conducted by NATS and the International Civil Aviation Organization (ICAO) has concluded this will deliver cost savings of up to US$300 per transatlantic flight, plus reducing carbon dioxide emissions by two tonnes per flight.

“To know the position, speed and altitude of every ADS-B equipped aircraft in oceanic airspace – in real-time – is a transformational change to how our controllers manage air traffic,” said Neil Wilson, president and CEO of NAV CANADA. “The separation can be cut from 40nm to 14nm”.

Martin Rolfe, NATS CEO, said, “The trial in the North Atlantic, the busiest oceanic airspace in the world, with over 500,000 flights every year and a forecasted 800,000 flights per year by 2030, will demonstrate to the entire aviation industry, that global, space-based ADS-B can revolutionize the service that we provide to our customers and the traveling public by transforming the way we perform air traffic management over remote regions.”

How Aireon contributed to the ET302 investigation

As described in our first article about the ET302 crash, FlightRadar24 had limited coverage of the flight path of ET302. Only when Aireon provided the crash investigators with its Sattelite received ADS-B data from the flight could the complete flight trajectory be analyzed with real-time high-quality data.

It could then be seen the ET302 showed the same roller-coaster pitch trajectory for the beginning and end of the flight as Lion Air JT610. This was one key puzzle piece in the the grounding of the 737 MAX.

← From the sidelines at MRO America, Day 2; the real reason for 737 production rate cutback
Training is a factor in the MAX crashes →

17 Comments on “Bjorn’s Corner: We are getting worldwide flight surveillance”