This is the third electric-power deal magniX has announced since the first of the year.

The first with a retrofit program with Canada’s Harbour Air, to convert its de Havilland Beaver seaplanes to electric power. 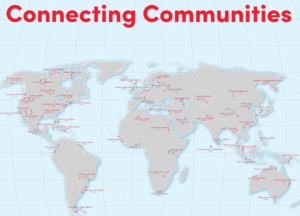 Sample routes that could be served by the magniX-powered electric airplanes. Source: magniX.

The second is a clean-sheet airplane design with Evation for a new plane called Alice.

Entry into service for the programs is targeted for the 2022-23 period. The US Federal Aviation Administration and Transport Canada are the leading regulatory authorities.

There is a lot of skepticism about avoiding battery fires on airplanes, given the 2013 lithium ion fires on two Boeing 787s and a battery-induced fire on an electric prototype airplane that crashed and killed its pilot.

Ganzarski said “thanks to Boeing and the 787, there are now clear guidelines how to treat that.”

There has to be compartmentalization of cells and modules within the battery pack. A test is required in which two cells are set afire to see that they don’t propagate.

“There are already guidelines in place by the FAA on how you need to pack a large batter more than the traditional 28-volt ones in an aircraft in order to get it certified,” he said. “We’re working only with companies that have passed that and know how to pass that in the way we use batteries for our aircraft.”

Ganzarski said preventing the fires is no longer an unknown. “It’s very much a known,” he said. “We’re working on how you optimize that and using different materials to get the same results.”

He said using batteries is “no less dangerous” than flying with fuel and even more so.” Fuel, he said, is more combustible than batteries.

Boeing and the auto industry, with the increasing use of batteries, have moved technology along to make battery-powered flight feasible, Ganzarski said.

A super-charger, like those used by automaker Tesla, can halve time but it shortens battery life.

The Beaver is a retrofit, as is the Cessna Caravan, with the very short ranges. The new, clean-sheet design Alice airplane by Evation will be able to accommodate routes of about 500 miles in 2-2 ½ hours. The Alice is powered by the three, 375 hp electric motors, all pushers. Two are wingtip motors and the third is in the tail.

For Moses Lake (WA), the Evation and AeroTEC deals are good news. Both airplanes will be test-flown at this central Washington community. The Mitsubishi M90 SpaceJet (nee MRJ90) is being test flown here. Boeing uses the airport and skies around it for flight testing and Japan Air Lines used the airport for 40 years as a pilot training facility.

4 Comments on “magniX adds third customer for its electric engines”