The figures show how the liquidity of the company has shrunk by $1bn over the last year and free cash flow has shrunk with $100m. We see the reason for the lowered results in the costs of E-Jet E2 initial production. A new aircraft program is not contributing to the bottom line until well after 200 units. Right now, every delivered E-Jet E2 eats into Embraer’s profits. This probably the reason for Embraer keeping deliveries at about one aircraft per quarter so far for the E2 program (eight deliveries in 18 months). A higher delivery rate would lower the Commercial division’s results and it could negatively affect the Boeing Joint Venture valuation.

Commercial Aircraft, which represents 35% of revenue (Figure 1, 33% in 3Q2018) didn’t sell any aircraft in 3Q2019. The backlog shows one order and three options were lost in the quarter. Deliveries of large Executive jet is finally picking up with 12 jets delivered compared with seven 3Q2018. Defense shows a loss in revenue compared with last year whereas Services are slightly up.

Guidance for 2019 was changed as the merger with Boeing for the Commercial division will now be delayed. Embraer also delivered guidance for 2020, with the new guidance summarized in the table below (Figure 2). 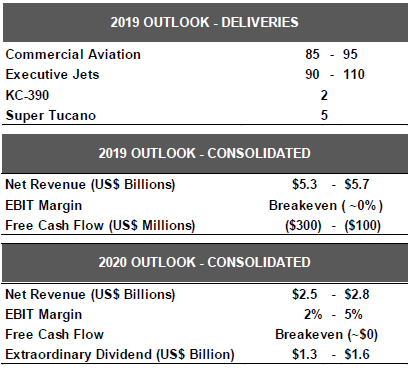 Embraer is still dependent on deliveries of the E175, mainly to the US Scope Clause market, Figure 3.

The E2 program has only delivered four E190/E195-E2s in its second year of deliveries. This is a delivery rate that is troubling. At our visit a month ago, we could verify there are no special parts or manufacturing problems. The reason could be these initial aircraft has a much higher production cost than their sales price. The delivery rate is kept down to keep the losses from mounting in the Commercial division, which could affect the Boeing Joint Venture valuation.

There were no sales in the quarter as seen in Figures 3 and 4.

The firm backlog is now one aircraft lower than the second quarter backlog minus 17 deliveries and the options column has lost three E175. The very low delivery rate of the E2s is evident in the tables, E2 deliveries will be closely watched in the next quarter.

The margin richer mid-range business jet has finally picked up sales and deliveries. It’s the new Praetor jets which deliver best in class range and comfort. The smaller Phenom 300 is also selling well.

The quarter saw the first delivery of the KC-390 tactical transport to the Brazilian Air Force. The next aircraft will be delivered in the fourth quarter. The continued flight tests are now focused on tactical capabilities.

← Wall Street rewards Boeing with December MAX delivery forecast
Can the DHC 8-400 compete with a CRJ550 for the 50 seat Scope Clause market? →