Aviation safety continues to improve in the US and Europe

Jan. 3, 2020, © Leeham News: Despite all the safety-related headlines surrounding the Boeing 737 MAX, 2019 was a mercifully quiet year with just six fatal airline accidents around the world.

Clifford Law Offices in Chicago recently released an analysis of aviation incidents and accidents reported to the US National Transportation Safety Board (NTSB) from 1982 to 2018. It highlighted several interesting patterns that are probably well known to pilots but perhaps not the rest of the aviation community. LNA also looked at accident data from the European Union Aviation Safety Agency (EASA) for 1970-2017 for comparison.

In 2018, the NTSB investigated 1,581 aviation accidents and incidents that left 847 people dead and another 768 people injured. The vast majority of these, not surprisingly, involved non-commercial general aviation aircraft. Seventy-nine percent of all US aircraft accidents and 72% of fatal accidents involved single-engine planes. In this article, LNA will focus primarily on commercial aircraft operations like the ones defined under US Federal Aviation Administration Part 121 rules.

The US National Safety Council puts the odds of dying as a passenger of an airplane as 1 in 188,106. Only railway travel is safer, with a death rate of 1 in 243,765. However, aviation accidents are much more likely to be fatal than those in other forms of transportation. From 1982 to 2018, 20% of all aviation accidents and incidents involved at least one fatality. By comparison, less than 1% of US car accidents were fatal. 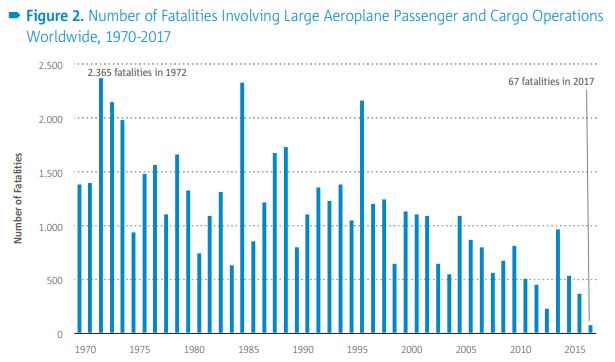 Accidents are concentrated in just a few phases of flight

Fully 48% of US accidents occurred during takeoff and landing, with an additional 3% during climb and 11% during approach. Interestingly, landing accounted for 27% of accidents but just 2% of fatalities. This statistic is likely explained by the vigilance of cabin crews checking for seat belt usage during initial descent.

The following is a full distribution of US accidents by phase of flight:

Why have accidents rates decreased?

There is an unfortunate but accurate saying among pilots: “Aviation safety improves one accident at a time.” With each accident, investigators uncover lessons that can be used to prevent future occurrences. So-called “probable cause” accident reports often contain recommendations to regulators, manufacturers, and operators regarding improvements to design, processes, documentation, and training.

Increased safety regulation and requirements for carriers and pilots have also helped reduce commercial accidents and fatalities. Until a passenger was killed due to an uncontained engine failure aboard a Southwest flight in 2018, it had been more than nine years since the last fatal airline accident in the US.

Pilot training and experience requirements have risen significantly, most notably the increase from 250 to 1,500 flight hours required for a US Air Transport Pilot certificate. Flight and duty time regulations have also been strengthened alongside other industry safety and transparency requirements. The work of accident investigators and aviation regulators, together with improved operator and pilot practices, will continue to make aviation even safer in the years to come.