January 3, 2020, ©. Leeham News: We continue our series why e in ePlane shall stand for environment and not electric.

Our target is to lower air transport’s environmental footprint and we can achieve this more efficiently by using established technologies. As an example, I will describe a very promising concept that has fallen out of focus due to the hype around everything hybrid and electric. 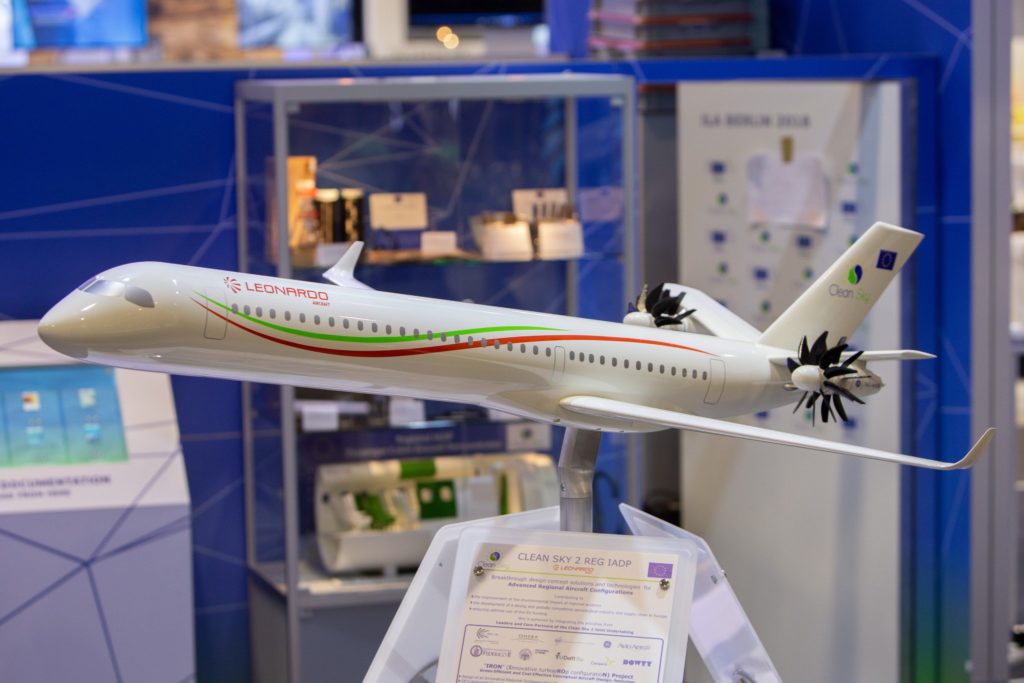 The next step in engine efficiency

Thrust for an aircraft is developed by accelerating air which passes the aircraft. All propulsion concepts are fundamentally some kind of air pump.

The pump’s efficiency is decided by how efficient we can generate the driving rotational force for the pump (defined as core or thermal efficiency) and how efficiently we accelerate the air with a fan or propeller (it defines our propulsive efficiency).

The high bypass turbofans build on the same principle. A large bypass stream has a low overspeed out the back (the technical term is low specific thrust). As thrust is: air mass-flow * specific thrust we need to accelerate a lot of air to keep our thrust when we lower the specific thrust to gain efficiency.

The drawback of a low specific thrust engine is the thrust falls faster with increased speed (it’s called a higher thrust lapse with speed). This is why turboprops cruise at around 300kts whereas jet airliners cruise at 50% higher speeds, around 450kts.

The increase in turbofan ByPass Ratios (BPR) from around 5 to around 10 in the last decade has given us engine fuel consumption improvements of 15% between engine generations. But the next decade can’t double the BPR once again to 20. The engine gets too heavy when a nacelle shall encapsulate such large fans.

The CEO of SAFRAN, Philippe Petitcolin, said before Christmas we can expect a 5% efficiency improvement by 2025 for designs using the turbofan architecture like the CFM LEAP (SAFRAN is a 50% stakeholder in CFM, the other 50% partner is GE Aviation).

While there will be continued improvements in turbofan core and propulsive efficiency over the next years, it won’t give us our expected 15% TSFC gains for the next-generation engines. We need to lower the Specific Thrust further to get there, beyond what architectures like the CFM LEAP or Pratt & Whitney GTF can give us.

The resurgence of the Open Rotor

Both SAFRAN and GE Aviation have researched how we can keep a 15% improvement for the next generation engines for the large fleet of short- to medium-distance airliners we call single aisles. It’s based on the next steps in lowering Specific Thrust by going to “Open Rotor” engines.

Here, a bypass ratio of over 20 can be achieved (really a lower specific thrust accompanied with an increased air mass-flow, the increased BPR is just the method to get there) without the engine/nacelle getting too large and heavy. SAFRAN ran a dual contrarotation design in ground tests during 2019 as part of an EU Clean Sky research project, Figure 2. 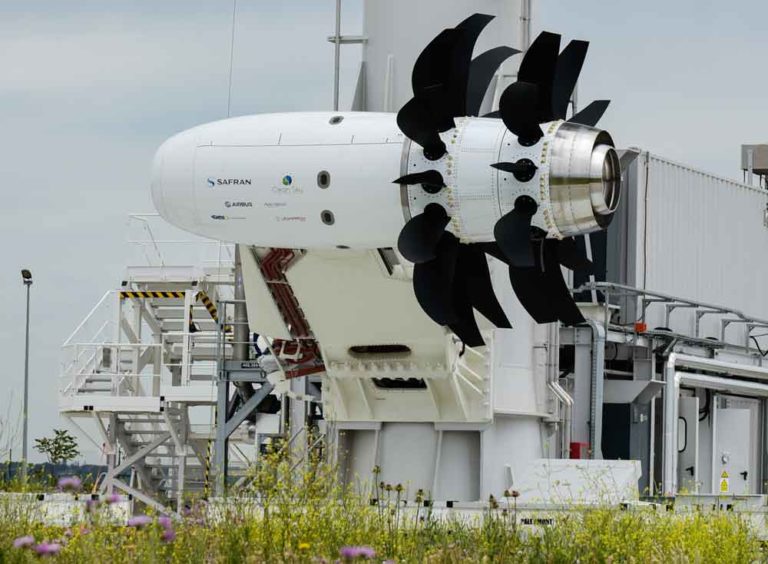 It demonstrated we can now design such an engine with acceptable noise levels. It also demonstrated solutions to the safety problems of an open rotor design (for instance lost blade, where you design to the turboprop safety rules).

GE Aviation through its Avio Aero subsidiary ran a sister Clean Sky program called IRON together with Leonardo. It focused on a simplified open rotor design, called a Single Unducted Fan, USF. This has the simplicity of a turboprop (one rotating fan at the cold end of the engine paired with a fixed de-swirling fan stage, Figure 3) but keeps the speed and efficiency of an open rotor. 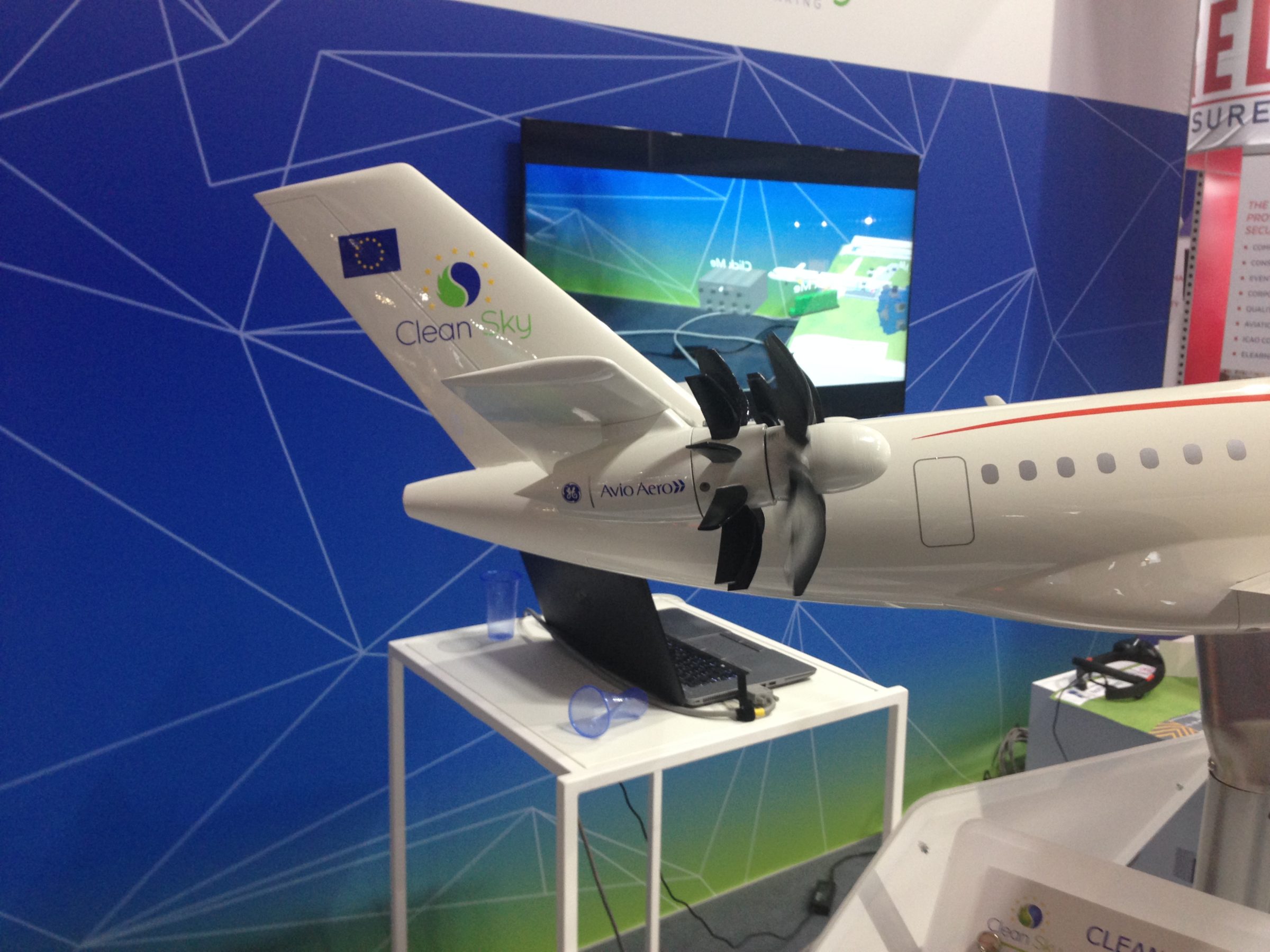 We recently visited Avio Aero in Turin to discuss the engine. The project leader for the IRON project, Jesus Lopez Ruiz, described GE’s route to the USF and its intriguing characteristics. In short, it combines the simplicity and efficiency of a turboprop with the speed of a turbofan.

GE and Pratt & Whitney built Open Rotor engines in the 1990s (Figure 4), but the aircraft projects using them didn’t happen. 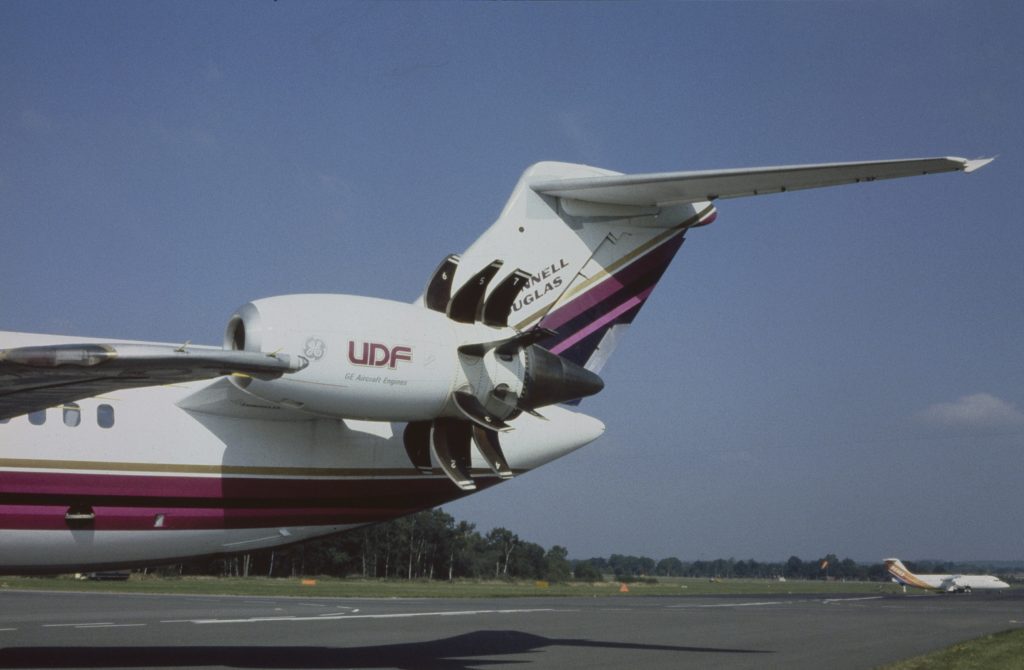 The main problem was the engines were too noisy. But GE didn’t stop the open rotor work after these projects. It continued the research to understand the sources of the noise and gradually worked out how to build the engine to fix the noise problem.

This knowledge was then combined with the idea to simplify the engine by turning it around and making the rear rotor fixed, Figure 2. This keeps the efficiency of the open rotor but simplifies the design. The fixed second set of de-swirling blades are variable in pitch but the complex contra-rotating gearbox is replaced by the simpler gearbox we know from turboprop engines.

The drawback of the USF

There is one drawback the GE USF shares with the SAFRAN Open Rotor design. It requires a clean sheet aircraft to be built around the engine concept.

The engines have a large diameter and the tips of the fans in an open rotor create vortices and these shall be kept away from the aircraft fuselage to avoid cabin noise and vibrations. Therefore, rear-mounted engines is the preferred configuration, like in the IRON project’s concept aircraft in Figure 1.

This, in turn, puts some challenges with the center of gravity and placement of the horizontal tail to control the aircraft in pitch. Leonardo found in the IRON project the three surface concepts known from Piaggio’s P180 Avanti provided an advantageous solution to the CG and pitch control problem of a rear-mounted USF (Figure 1).

The hype around electric and hybrid-electric aircraft has made all OEMs start ambitious research projects with demonstrator hybrid concepts flying over the next years.

At the same time, there is not a single project taking the USF off the drawing board to a flyable proof of concept. This is a shame, as I fail to see how the hybrids can deliver efficiency improvements (and, therefore, lower CO2) beyond what the USF can over the next decades.

It’s clear the hype has made us electric blind. Those who haven’t done the math think there will be an aeronautical Tesla popping up in the next years, and they don’t want to miss this train.

There is no train to miss. We lack stop-lights in the sky.

← 2020 Outlook for Airbus, Boeing, et al
Aviation safety continues to improve in the US and Europe →

61 Comments on “Bjorn’s Corner: Why e in ePlane shall stand for environment, Part 3. Open rotor revisited.”