Trouble with the engines 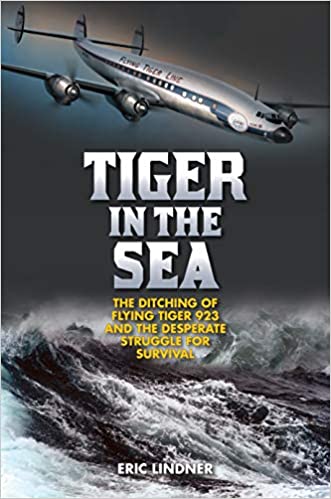 Astonishingly, from the beginning of Murray’s event to the landing, three of the four engines failed, a long-odds calculation. Two failed due to mechanical issues. A third failed because the flight engineer, a recent hire from Eastern Airlines where he also flew Connies, hit the wrong switch on the unfamiliar Tigers cockpit to shut down an engine. Damage incurred prevented a restart.

Sulley’s passengers and crew had only seconds to prepare for the ditching and little time to think about the emergency and possible outcomes. Murray’s crisis began just past the point of no return on a trans-Atlantic flight. The passengers and crew had an estimated five hours in a desperate attempt to divert to Shannon to think about their crisis and the worsening emergency as one engine after another failed. Finally, down to one operating engine, it became clear Murray had to ditch the airplane well short of Ireland.

High and the Mighty

The book begins with the first engine failure and returns to describe the flight, the Constellation’s historical troubles with the engines, the histories of the flight crew and passengers. In this respect, the book reads like a real-life High and the Mighty, the classic 1950s fictional-based-on-fact story by Ernest Gann.

For us old fudds and aviation geeks, Gann was the premier aviation writer of the 1950s. With a history in commercial aviation and as a World War II ferry pilot, Gann’s experiences were translated to book after book. The High and the Mighty was one of several turned into a movie, in this case starring John Wayne. It was the original disaster movie.

Unlike Gann’s characters in the book, whose backgrounds were sappy and boring both in reading and the overlong movie, author Eric Lindner tells interesting stories of Tigers 923’s passengers and crew.

While Gann’s TOPAC DC-4 flight suffered a single engine failure past the point of no return, the drama ensued when the departing propeller gashed the wing, causing the flight to lose fuel. The loss led the pilot (Robert Stack) to conclude he’d have to ditch the Honolulu-to-San Francisco flight.

Flying through a storm, Stack and co-pilot Wayne worried that ditching in the cold, stormy Pacific would be catastrophic. Meantime, a Coast Guard Boeing B-17 left San Francisco to intercept the TOPAC flight.

In real life, the military launched a B-17 to intercept Tigers 923. Just as in Gann’s story, the intercepting B-17 worried it would miss Tigers.

The fictional TOPAC flight was able to barely make a safe landing in San Francisco through clever use of fuel settings on the three remaining engines. Even so, fuel starvation caused one engine to cease on the final approach.

There was no such luck for Tigers’ Capt. Murray. Having flown for a few hours on two engines, the third engine began to fail under the strain. Finally giving up, Murray had only minutes left to land the Connie on one engine into a stormy North Atlantic sea.

Passengers and crew had to exit the airplane as it filled with water. The high seas caused one raft to overturn upon launch and another to immediately drift from the plane before passengers could board it. In the end, only two rafts were used, a direct contribution to the deaths of 28.

Author Lindner includes in his story the hearings by the Civil Aeronautics Board, which investigated accidents then. Murray’s piloting was nothing short of a miracle and whose handling of the emergency was professionalism at its best. Nevertheless, he had to defend his actions (not just explain them) against some accusatory questions.

Linder closes the book by revisiting the postscript of the lives of many passengers and crew. Perhaps the saddest and most ironic story is that of Capt. Murray. Years later, he died while snorkeling during a layover between his Tigers flights.

Tigers in the Sea is one of the best crash books I’ve read. It’s available through Amazon.

10 Comments on “Pontifications: Book Review, “Tigers in the Sea””