Industry stands together on safety 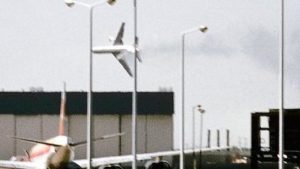 On May 25, 1979, an American Airlines McDonnell Douglas DC-10 crashed on take off from Chicago’s O’Hare International Airport. Within minutes, it was known that the No. 1 engine separated from the airplane just after the airplane was committed.

The aircraft gained a few hundred feet before rolling over on its left wing, crashing into a trailer park. All 271 on board and two people on the ground were killed.

The Federal Aviation Administration immediately grounded all DC-10s in the US because of the engine separation. Regulators elsewhere in the world followed suit.

I was working at McDonnell Douglas Huntington Beach, in the DC-10 Pylon assembly line. I was doing heavy structures assembly drilling and fastening the firewall to the Spars and Pylon skins, the heart of the structure. Over the next few months, we got hammered.

So many fingers pointed at us for killing these people. It got real personal. There were about 30 of us and our world changed when our pylon came off the bird. As the engine separated, it went up and over the wing, as it was designed to do. But the pylon smashed the leading edge of the wing, severing hydraulic lines that held the leading edge slats in place. The slats retracted on the left wing. Those on the right wing remained extended, controlled by a different hydraulic system. The left wing stalled. The pilots followed the book explicitly in trying to fly through the emergency. They powered back, as trained. The book and training were wrong. The reduced airspeed allowed the left wing to stall, causing the plane to roll over and crash.

Ultimately, the National Transportation Safety Board ruled that the mechanics at American erred in a new, short-cut procedure for engine removal and installation. The process was designed as two-step: remove the engine, then the pylon. Install the pylon then attach the engine. American (with FAA approval) adopted a procedure to do this all in one step.

American’s reinstallation had to be absolutely precise. But it wasn’t. Mechanics did it wrong, cracked the pylon part holding the aft portion of the pylon to the wing. It eventually broke, allowing the engine at take-off power to thrust forward and up. The front part failed, and the sequence of events killed the airplane and everyone on board.

I have lost a number of aircraft in my career with stuff very close to my work, and you always wonder, was it me. This time it wasn’t thank God.

Boeing showed up to help

A lot of good people stood beside, behind and around us. We were sheltered. Weird things happened. Boeing engineers showed up and asked if they could help.

Years later, I was at Boeing and we lost a 747F when the pylon mid-spar fuse pins failed. The KLM aircraft crashed returning to Amsterdam for an emergency landing.

McDonnell Douglas engineers returned the favor and just showed up. The engineers from my old pylon shop led the group and it was so good to know they had our back.

Aircraft manufacturing is a small world where a community of dedicated professionals do miracles every day. It is a seriously personal business where your fiercest competitor is in many cases a respected friend. Airplane guys will go to war with our products, but when the issue is safety and people, the companies are there for each other behind the scenes. But by the Grace of God go I….

Today, I can completely empathize with the Boeing 737 MAX engineers and production crews and what they went through. As bad as the media was during the DC-10 crash and investigation, the media today is bigger faster and more voracious than anything we old guys experienced. But it looks like the story was the same.  The industry again hit the pause button, and help arrives arrived from your competitors. I can’t prove it, but the suggestion of a synthetic instrumentation addition looks to have Airbus fingerprints all over it, especially when EASA looks to already have the skids greased, so to speak.  That doesn’t just happen to materialize across the pond without someone championing it.

So today, we remember our industry in the darkest of times and at their best simultaneously.  Competitors who can put aside everything to keep people safe, because without that, we have nothing.

Editor’s note: Airbus offered assistance to Boeing during the MAX crisis. Neither company confirmed whatever help was accepted.

Scott Correa was a structures assembler at McDonnell Douglas when the DC-10 crashed. He was a senior manufacturing planner at Boeing upon his retirement.

← Widebody write-downs are coming – how much will asset values be affected?
Bjorn’s Corner: The challenges of airliner development. Part 5. Developing to Cert rules →

46 Comments on “Industry stands together on safety”