Oct. 11, 2021, © Leeham News: The regional aircraft market, defined as aircraft seating 100 or fewer passengers in standard configurations, has fewer OEM players than before. 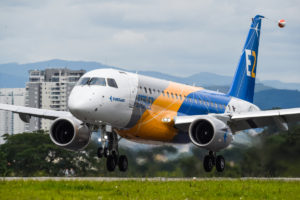 The Bombardier CRJ, purchased by Mitsubishi Heavy Industries, ceased production earlier this year. De Havilland Canada will stop Q400 production later this year once it clears its backlog. Both programs might not start production again in the future.

The only latest-generation design, the E175-E2, does not have a single firm order. (There is a conditional order for 100 from the USA’s SkyWest Airlines.) MHI’s SpaceJet development has been “suspended,” but nobody believes it will be restarted.

The ARJ21 and SSJ100 are almost exclusively in service in their respective domestic markets. In practice, that leaves only the ATR42, ATR72, and E175-E1 as new regional aircraft in production for most operators from next year.

However, it is far from guaranteed that ATR and Embraer will enjoy near-monopoly status for the foreseeable future. Embraer has been pondering the launch of a turboprop program for years and is currently looking for an industrial partner.

One also must mention that potential jet fuel alternatives, notably hydrogen-powered aircraft, are likely to come to the regional market first. Therefore, the regional aircraft market could see some significant changes.

With the above in mind, LNA thought it relevant to look at the in-service regional aircraft, both for regional jets and turboprop aircraft.