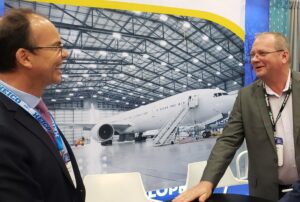 A fourth 777 P2F program, by the supplemental carrier Eastern Airlines, doesn’t involve a full freighter conversion with a cargo door.

Kansas Mod, or KMC, is paired with the National Institute for Aviation Research (NIAR), which is the aerospace research arm of Wichita State University in Kansas. NIAR is paired with WERX, a WSU program that trains engineers. Together, this is known as NIAR WERX. This cumbersome combination will be referred to as KMC.

Jim Gibbs, the CEO of Kansas Modification Center, announced a firm order for three 777-300ER conversions and options for seven more last week at the Aviation Week MRO Americas exhibition in Dallas. Backbone Freighter Leasing, an affiliation of Dr. Peters Group, a European lessor, placed the order. The 10 aircraft were operated by Emirates Airline. Dr. Peters Group is best known as a lessor of Airbus A380s.

Christian Mailly of the Peters group said KMC said Backbone considered the IAI and Mammoth programs but developed a trust with KMC that gives confidence that the conversions can be delivered on time. The firm orders are scheduled for delivery in 2024-2025; options are slotted in for delivery in 2025, 2026, and 2027.