How Boeing can pursue new airplane sooner than 2030 decade

Nov. 7, 2022, © Leeham News: Boeing is methodically working through the full return of the 737 MAX to service, a process that will continue to early 2025 to clear the stored inventory. There were 270 stored MAXes at the end of the third quarter, Sept. 30. 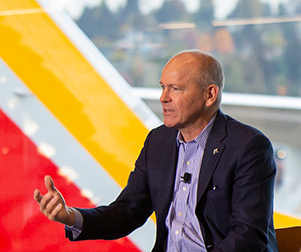 Delivering 115 787s that were built but stored during a pause of nearly 20 months from October 2020 will also take two years to complete.

Ramping up production of each line is a slow, arduous process. The 737 line was shut down in December 2019. The line now is geared to produce 31 737s a month, though meeting this target has been erratic.

The 787 line in Everett was shut down permanently and the Charleston (SC) line was reduced to just half an airplane per month. It will be a couple of years before production returns to 5/mo, the level at the start of the pandemic and reduced when deliveries were suspended.

CEO David Calhoun said stability and reliability are keys to Boeing’s recovery from the MAX and pandemic crises that sapped finances and all but destroyed a once-sterling credibility.

Calhoun also said he has no plans to launch an airplane program to fill a gap in the product line—a reference to Boeing’s weak position vis-à-vis the Airbus A321neo. Rather, he wants to launch a game-changing airplane that at a minimum is 20% more efficient than today’s aircraft. He believes engines coming off today’s technology will only host a 10% gain.

He added that Boeing won’t launch a new airplane program until the next decade because a new engine won’t be ready until then. He made his remarks at the first investors day since 2018. Three weeks before that, Boeing hosted a meeting with advisors, consultants, and opinion makers.

← Pontifications: Boeing is fighting the last war instead of the present one
Excluding China in Boeing forecast recognizes trade, geopolitical realities →