We just finished the new book, American Icon: Alan Mulally and the Fight to Save Ford Motor Company. It is well worth reading. 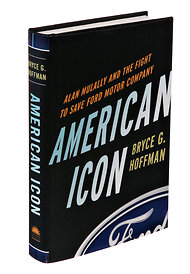 There’s very little about Mulally and his time at Boeing, though there are lots of references. The most extensive discussion is Chapter 3, The Man on the White Horse, in which Ford CEO William Clay Ford Jr. approaches Mulally to leave Boeing and the process Ford–and Mulally–went through for his decision-making.

Part of the process was the interaction between Mulally and Boeing CEO Jim McNerney–and McNerney doesn’t come off looking too good. This may not be particularly surprising, since the story is told from Ford’s and Mulally’s viewpoint and is not a deep look into the Boeing side of things. But this examination is nonetheless interesting. This is a big omission, but the machinations reported are insightful.

But the main event–the crisis Ford was facing when Mulally joined, and how he built a team to deal with it–is fascinating reading. It makes you wonder how different things might have been on the troubled 787 program had Mulally been here as things went south, with his applied management tactics that were very different than the atmosphere widely discussed among employees once Mulally left. This atmosphere, employees said, punished bad news rather than rewarded honesty and candor, and Mulally’s successor, Scott Carson, simply didn’t have the technical background to cope with the 787’s growing challenges.

The author, Bryce C. Hoffman, was the automotive reporter for the Detroit News. He gives a candid look at some of Mulally’s errors, but by-and-large this is a story in which Hoffman paints a picture in which Mulally can do little wrong.

Is he a fawning story-teller or do the results speak for themselves, driving the story to its constant pat-on-the-back approach to Boeing’s refugee? We think largely a results-story. At the end, Hoffman gives credit to those who also had a hand in saving Ford, but almost as an after-thought–except for Bill Ford himself, who realized he didn’t have the depth or experience to do the job himself and set aside his ego and family legacy to bring in Mulally.