Bjorn’s Corner: Lighter fuselage materials and what they bring

April 02, 2015; There is different information whether Boeing will adopt new Aluminum Lithium based alloys for the fuselage of the up and coming 777X, our latest info is that this is not yet decided.

In this corner we will look at what is at stake should Boeing go the route of new materials or not. It will discuss what is to consider when choosing materials like Aluminium Lithium (AlLi) or Carbon Fiber Reinforced Plastic (CFRP) for aircraft structures, especially for fuselage structures which has many conflicting requirements.

We will see that aircraft fuselages are tricky to make light and that a stronger material not necessarily means weight gains.

Which parts can we change

The material change we discuss is for the fuselage structure and constitutes a rather small part of an aircraft’s total weight. Lets try and understand how much that is:

Aluminum Lithium is considerably more expensive than normal Aluminium alloys and more difficult to machine, therefore it will come in qustion for parts which has a high fly/buy ratio i.e. little spill when formed to fit the aircraft. Machined parts like fuselage frames, cabin floor beams and the many fastening and fitting parts that are needed in a fuselage to attached interior items etc will therefore not be candidates for change to AlLi. The most likely candidate is the fuselage skin, it is relatively easy to form and has a high buy/fly ratio. The fuselage skin is typically half the mass of the complete fuselage structure so now we are at 18.5 tonnes which can be can be changed for a stronger or lighter material.

AlLi is about 5% lighter than normal Al alloys for the same dimensions, Lithium is a light metal and it lowers the alloys density. Rightly mixed with other alloying metals it can create alloys that has other criteria that are better than conventional Aluminium alloys. There are variants that have higher tensile strength, others that have higher toughness (capability to absorb energy while deforming but not rupturing) and still other that have good fatige characteristics like slow crack growth. Often these characteristics come at the expense of some other, therefore it is important to understand what are the key requirements for the part we want to replace.

The main requirements for the load carrying part of a fuselage structure are:

– High tensile strength for the tension loads that pull up maneuvers or gusts provoke on the upper fuselage. On the lower fuselage this result in compression loads, there we need a structure that has good compressive strengths and one that avoids risk of buckling.

– A major considerations is the hoop stresses that gets incurred in the fuselage skin by the cabins 6,000 to 8000 ft cabin altitude when the outside air pressure is much lower at cruise altitudes of 30-40,000 ft. This cyclical stress is repeated once for every sector we fly and it forces major fatigue considerations on the fuselage structure as we expect long range aircraft like 777X to withstand 20,000 flight cycles and short range aircraft to take over 60,000 pressure cycles without rupturing.

– A third major consideration is tolerance to damaging objects. Figure 1 is from a DLR paper on fuselage dimensioning and it shows the many cases of objects hitting the skin that has to be considered. 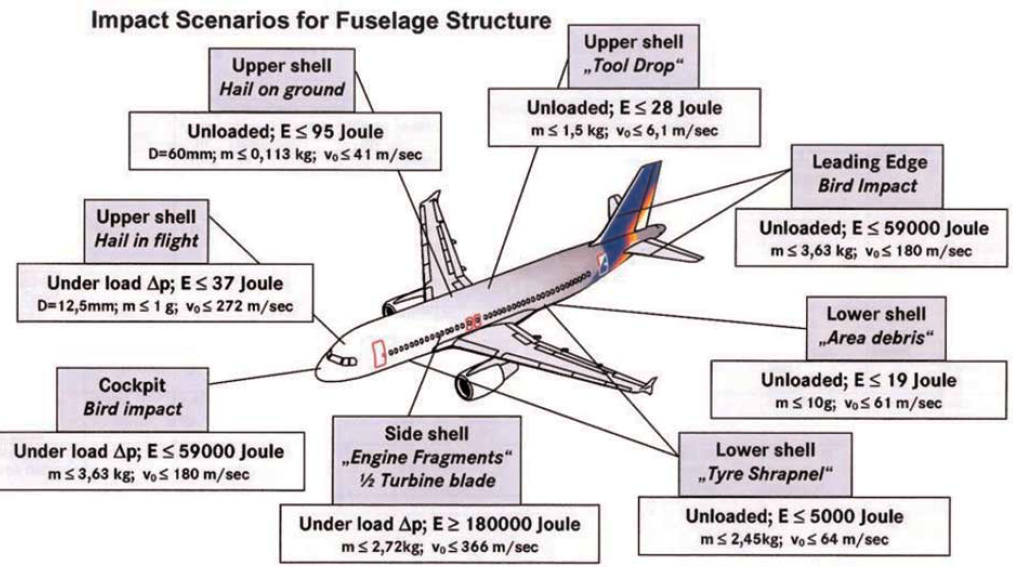 – Finally we can not make the skin arbitrarily thin, we need skin dept to e.g. countersink flush rivets. Practical minimum skin dimensions are 0.06 in or 1.6 mm.

The next picture, Figure 2, shows what happens for a medium sized aircraft when we apply these criteria. The graph is from a Doctor thesis by Jörg Fuchte which is worth a read. It deals with single or dual aisle cabin design optimization and its consequences on fuselage mass. The graph is for a 56 m aircraft fuselage i.e. the size of 787-8 or A330-200 and therefore shorter than our 777X but it shows in a very illustrative way how the different criteria we listed sets the skin depth for different parts of the fuselage. 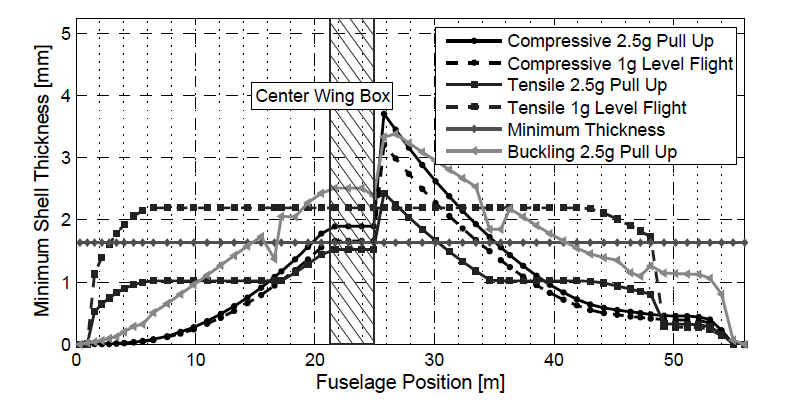 The fuselage skin has to be sized by the highest of the different dotted lines in the graph. We can see that at the front and rear of the aircraft this is the minimum thickness criteria, then the cabin pressure differential is the sizing criteria until we get close to the wing where the compression buckling criteria (light grey curve with triangles) is dominant for the lower part of the fuselage around the wing. Only 12 m of 56 meter fuselage gets dimensioned by pull up or gust bending forces needing high tensile strength for the fuselage top part (black curve with dots).

The graph shows that for the most part we need a skin material with good fatigue characteristics more than high tensile strength. This can be achieved with special tempers (heat and mechanical treatments of AlLi material) but it might not lead to thinner dimensions, the designers might want the longer cycle life instead.

So despite AlLi having higher strength characteristics it will be very much a trade which of its characteristics will be emphasized and what that will mean for reducing material thicknesses and therefore weight gain beyond the 5% which is gained by its lower density.

Lets now summarize our likely gain. We had 18.5 tonnes of material that could at least be 5% lighter. That is 0.825 tonnes or 0.5% of the empty weight. Should the material allow reduced dimensions for the fuselage skin that might increase to up to say the double, giving a gain of 1.85 tonnes or 1%.

The change of material for the fuselage of 777X to higher strength AlLi gives the un-informed the idea that it can mean major weight gains for an aircraft like 777-8X or -9X. It does not take a complicated reasoning chain to understand that it can bring weight advantages, but they are not in the order of what people think when they hear that a material is up to 20% stronger than conventional alloys.

Aircraft structures and especially fuselages are sized by a complex set of criteria, a materials strength being just one of many. In the end the large weight gains that were forecasted for CFRP fuselages did not materialize, very much for the reasons shown and add to these needed lightning and electrical return paths in the CFRP via in-layed metal meshes.

The above trades will have to be done for aircraft structures that changes conventional Aluminum alloys for better but more expensive Aluminium Lithium ones, to the designer he gets better characteristics at the risk of hidden issues with the new materials, something that Airbus learned the expensive way with new materials in A380 wings.

In our example with the 777-9X we could realize a weight gain of 1.85 tonnes if the net gain of our AlLi alloys were 10%, that is an empty weight improvement of 1%, a sobering result for the optimist but a gain that can be worth having for the designer if the cost-benefit trade close.

56 Comments on “Bjorn’s Corner: Lighter fuselage materials and what they bring”