April 13, 2015: Boeing surprised aerospace analysts at the year end earnings call with far higher cash flow than had been expected.

Analysts beat up Boeing pretty badly on the 3Q2014 earnings call and were taken aback by the dramatic upswing in the fourth quarter.

We began to hear as early as January that Boeing achieved the marked improvement by getting accelerated advances from customers who had placed commercial airplane orders, resulting in the dramatic upswing. The reason was to respond to the beating Boeing took on the third quarter earnings call, several Wall Street analysts told us.

Below are selected excerpts from the April 13 note.

We think cash generation will come through below expectations as 787 cash costs improve at a continued slow pace, while tougher pricing in the backlog, pension and cash taxes are headwinds. We continue to see risk to the large aircraft production cycle, as deliveries as a percentage of the installed base are well above normal levels, while higher interest rates have the potential to limit further growth and cheap fuel makes older aircraft more attractive relative to new. 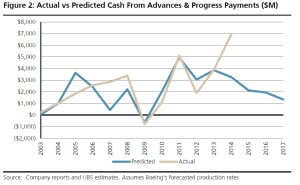 Boeing’s cash flow at the end of 2014 dramatically increased because of accelerated customer advances, according to a detailed analysis by David Strauss of UBS. Source: UBS. Click on image to enlarge.

Boeing’s cash flow has benefitted from a very strong order cycle and increasing production rates over the last several years driving large customer prepayments. Specifically, we estimate that Boeing’s FCF has benefitted by $4-5B per year on average over the past few years, including nearly $7B in 2014. Both advances and progress payments represent customer payments prior to delivery, although only advances are easily identified on the balance sheet and cash flow statement as progress payments are contained within the inventory disclosure.

We have modeled Boeing’s cash from prepayments (advances plus progress payments) assuming 2% deposit at order and 40% additional prepayment in the two years prior to delivery. Our model has correlated well with actual prepayments other than during 2014, when total prepayments at $6.9B were much higher than we would have expected. Assuming BA’s production forecast along with continued book-to-bill at 1x, we forecast that total prepayments will average ~$2B in 2015-17, $2-3B lower than average from 2011-14.

When a customer places an order, assuming an order is for further out than 18-24 months, Boeing collects a small down payment at ~2% of the purchase price (1% of list), which is recorded as an advance (liability) on its balance sheet. Then roughly 18-24 months prior to delivery, the customer begins making additional payments to Boeing, with roughly 40% of the purchase price (20% of list) in total due prior to delivery. Initially, these prepayments are also recorded as advances.

Once Boeing begins aircraft production, it re-classifies advances as progress payments, which is a contra asset within its inventory account. The customer pays the remaining ~60% balance at the time of delivery.

Cash flow going forward depends in part on whether Boeing will be able to sell the 40-60 777 Classics per year to the introduction of the 777X in 2020. According to Wall Street, Boeing indicates it is about half sold out in 2017. We also understand Boeing wants to pull forward EIS of the 777X from 2020 to 2019, which would relieve some but not all of the pressure on sales goals.